an introduction to alicia 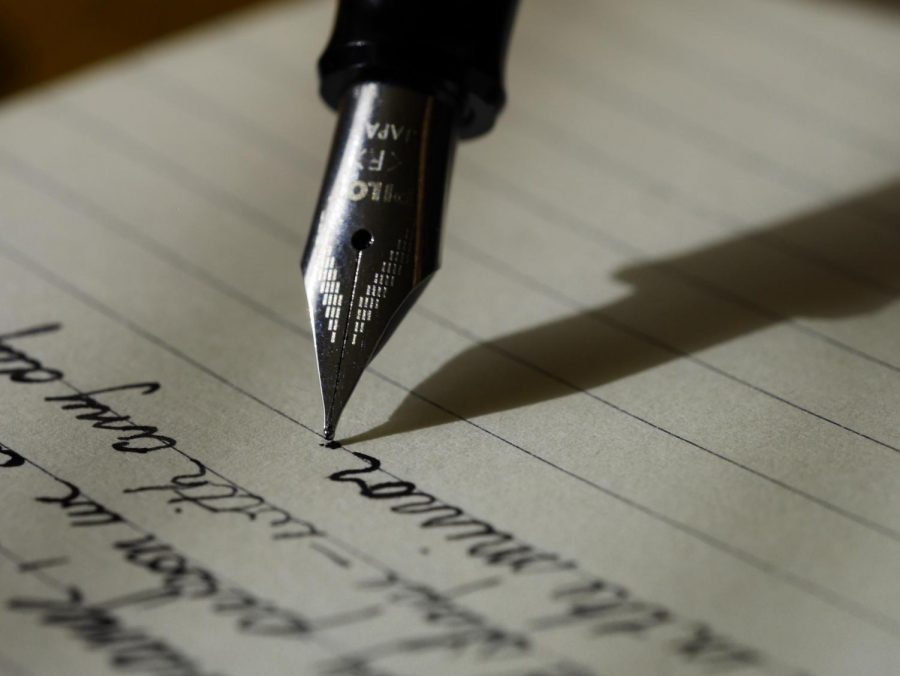 the grass here is thick and tall,
rising enough to conceal the lower half
of a person’s calf should they walk
carefully enough not to disturb it.
the grassy fields stretch out for miles,
coated in a grey morning sunlight,
disrupted only by a few narrow roads
pressed down by infrequent feet.
there are trees, too — many of them young,
growing in patches across the fields,
sprung up from the ashes and seeds of
the last groves which stood there,
smoke still tainting the scent of the grass
though the fires have been out
for at least a handful of years.
some hints of the old forest remain —
a densely packed swarm of trees
almost able to call themselves a woods
hang on the edge of the plains,
seeping toward a more distant forest
that was untouched by the blaze.
some hundred paces away
from the edge of this spotted growth,
a single figure is seated in the grass —
its posture straight and tall,
pushing from the ground like
it was grown alongside the field.

she is not an attractive woman —
the one who sits isolated
with her legs folded onto themselves,
her face calm and resting as the breeze
brushes her face with stray hairs,
gone loose from the braid
that runs from the right of her face
to the left, wrapping around
the back of her neck and
draping over her right shoulder.
it is grey and dry, though not with age —
her skin is unwrinkled and pale,
almost dangerously so —
a burning tawny tone with creases
like a sheet of buckskin in the sun.
it hangs from her bones like
a wet sheet tossed across a line to dry —
this and other such indications
of her youth are muddled and buried by
sweat, stress, weather, weariness, and
the field of warped scars spraying out
from where her left eye should sit.

twisted and bubbled, then frozen
with a stiffened elasticity,
it hangs below her brow and
runs down her face like a melting fire,
cascading over her cheekbone,
then stopping — fading back into flesh
before passing the lowest point of
her septum, where her nose angles up.
her nostrils are narrow and pointed,
as is the tip of her crooked snout,
minute and hardly noticeable
with the way the bridge curves up,
twisted to her right and then back again —
a wobbling structure on steady soil,
evidenced by stillness of her mouth.
like a slit of cracking brick,
it hangs wiry above her chin,
which fades smoothly into an
undefined jaw, the muscles in her neck
not strengthened enough by speech.

likewise, her cheekbones are slight
and the skin around them is
untested and unworked —
her muscles seeming to hardly leave
this blank and resting look on her face,
as if in quiet rage at her own boredom.
her remaining eye is airily closed —
the weight of her lashes
seemingly too much to hold up
with the general weakness and
lack of definition that
courses across her countenance —
the softness of her cheeks
disguised by the chaos of her scars.
it’s a narrow and stretched visage,
running across her bones
like wax melting down a jar,
and the whole of it is uneven —
skewed and off-kilter,
even the way her head rests on her neck
not quite balanced or symmetrical.

she is seated in the grass, and it swells up
around her, swaying in the breeze
and rubbing against her legs.
she is dressed plainly in wool and leather,
all browns, whites, and greys,
save a few accents of blue along
the cuffs and trim of her overcoat
hanging open and baggy around her,
as if it has dripped off her shoulders
and pooled in the grass.
the rest of it is pale, a cloudy white
ripe with stains and spatters —
vague visions of lemon juice
still clinging as off-white rings
around some of the dark patches
on her arms and across her chest.
it is lined on either side with
dark, leaden buttons,
though the slits they mirror
seem as fresh and firm as the day
that they were sewn.

the rest of her clothes are
tighter and better kept clean.
beneath this stiff and heavy overcoat
is a cool grey sweater,
the wool soft and plush as it
wraps her biceps
like bark on a young tree —
highlighting the shape of her muscles
and stretching at their swelling mass.
the lines of her linen undershirt show
faint beneath its clinging coverage,
hugging tight, firm and compressive
over the curve of her breast.
her breeches are thick and
flexible only through force —
the raw strength of her legs leaving
paled, scar-like creases in the leather
that only hint at the movement
she is capable of.
rising up her legs and stopping
just shy of the base of her knee,
her boots are plain but sturdy —
the only security of their placement
being their tightness on her calves
and a leather strap tied around the cuff.

laid across these legs of hers,
her fingertips resting atop it with a
greater care than ever could be
expected of those calloused hands,
is a steel great sword — a montante.
the blade is slim and tapers slowly,
the edge fading into a point as suddenly
as such a sword can be swung.
as she sits, the cross guard
hangs just beyond her right hip —
the blade balanced across her lap,
hanging well over her left thigh
and disappearing into the tall grass.
odd for a great sword, it is undecorated —
the closest to an engraving
its maker managed was their mark,
a few letters so worn and buffed
that they can no longer be read.
harshly utilitarian, the blade lacks
even parrying hooks and a fuller,
and the cross guard is little more
than a thin rod of metal, pounded flat.

she has sat like this for some time,
perfectly still aside from the occasional,
uncontrolled twitch of her fingers or face.
she is unsure of how long herself,
but she knows it has been significant —
already, the singing of field birds
is beginning to find its way toward her,
the threat of a sitting soul
not half that of one who is walking.
she takes a deep breath in,
smelling the bitter grass and dry dirt
all around her, the distant hint of pine
from the forest, and the subtle waft of
field flowers dancing across the green.
lace, cotton, hawkbits, and agrimonies
all mingling, sinking between
the blades of grass — then,
there’s a rustle — directly in front of her.

beneath its burying scars,
the left side of her face twitches
and writhes as some vestigial muscle
tries to open an eyelid
that has been melted shut for years
while her right hand glides
across the blade of her sword,
fingers rippling as they
cross over the guard and onto the leather.
with each landing finger,
her eye drifts more open — a cast iron
darkness surrounding her pupil,
spattered with specks of silver,
like scratches and scuffs on a shield.

a young deer stands before her —
its hide still spotted white among the
caramel fuzz and its eyes filled
with fear when it realizes
what it has stumbled upon.
she has fallen deathly still again —
so much so that the fawn’s eyes
flit back and forth
to keep her shape defined in its sight.
it hovers only a few paces away,
and its front right hoof is hanging
in the air while it contemplates
taking that next step.
her hand relaxes, sinking down
and receding from the grip,
her fingertips resting on the ricasso.

the fawn’s hoof sets tenderly in the grass,
its head still held out and low
between its shoulders, nose twitching
and eyes so dark it could see the silence
pouring forth from the woman.
it shifts its snout, drifting across the field
and through the sweet air,
dipping and skewing to avoid the patches
of flowers while it tries to place
the scent of this motionless figure
it has found itself before.
her fingers pull like a magnet
from off the blade —
the sudden motion so subtle the fawn
hardly notices, hardly looks.
it sees the hand come toward it, though —
slow and cautious, extending through
the grass and halting a few steps away.
the fawn stretches its neck,
the scent of the woman now much clearer
to its learning nose.

she smells overwhelmingly
of flowers and river water,
as if they were smeared across her flesh,
hiding her well in these wild fields.
with patience, the fawn picks out
the smells of ammonia and acid,
an almost milky burn
spilling out of her clothes and skin.
there’s a scent of something singed
that lingers around her hands and hair —
some charred meat or crisped vegetable
staining her breath and pantlegs.
as the fawn steps again and
sniffs closer at her hand,
it notes the hint of iron and mulch
clogged deep beneath her nails
and sunk into the creases of her flesh.
the woman is rigid as a rock as the fawn
presses its nostrils against her palm,
nuzzling and sniffing at the plethora
of scent now laid before it.
her fingers come to rest on the bridge
of its snout — the fur short and fine,
at times prickling, at others plush
while the fawn twists its neck
to test new angles for capturing
whatever it is that hangs in the air
around this patient person.

deep, sharp, and sudden as an arrow —
a voice carries across the grass,
a single word rolling through the plains.

her head snaps back toward the sound,
her eye twisting over her right shoulder.
while she stares toward the hilltop,
there’s a flurry of rustles in front of her —
when she turns back around,
the fawn has vanished into the forest,
a wake of stomped flowers
the only indication it leaves
of its brief and ghostly presence.