Rebecca Weisman: My Human Being 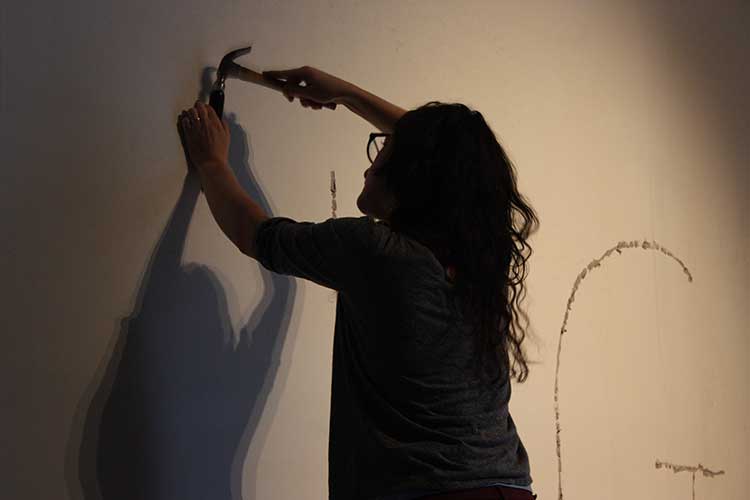 Currently running in the Julian Scott Memorial Gallery is the performance and installation piece “My Human Being,” created by local artist Rebecca Weisman. The exhibition will last from Feb. 16 until Mar. 10.

Sean Clute, an Assistant Professor in the Fine and Performing Arts, invited Weisman to display her work at Johnson State College as part of his brainchild, the Impractical Practicalities series. “The Impractical Practicalities is a series of talks that showcase innovators of art, technology, and science,” Clute said. “The series explores the value of creative inquiry, experimental processes, and forward-thinking people and movements.”

Clute chose Weisman because her artwork is comfortable in a wide variety of different types of media. “She works with video, installation, sound, and painting,” Clute said. “She does not limit her palette but rather embraces exploring many techniques and styles.”

The current installation and performance piece features several points of interest, one of the most notable being the large snow wall that was built outside in front of the gallery. Inside, Weisman chisels the words “My Human Being” into one wall. As she works, her actions are recorded and displayed by a projector on the opposite wall.

Ambient sounds, including drips, a white noise machine and distorted spoken words play over the surround sound system in the gallery. A small TV sits in one corner and plays time-lapse footage of Weisman inscribing the words “My Human Being” with grass, leaves, or other natural materials, and then filming their decay over time. The interior wall opposite the snow wall outside had been painted with perfect squares of blue and tan, or “snow pixels,” as Weisman referred to them during her artist’s opening talk.

During the talk on Feb. 16, Weisman explained how her piece related to the dissolving of boundaries between the interior and exterior, permanence to impermanence, technology to nature, and the ultimate futility in leaving behind a mark. It also explores the idea that, despite this ultimate futility, humanity feels the intrinsic need to leave behind a mark. Between trying to leave something behind and the acceptance of failure, something has the capability to exist.

Weisman has displayed her work nationally, including publishing articles in Namarupa and C Magazines. She has a BA in Studio Art from Reed College and an MFA in Interdisciplinary Art from Goddard College. Along with producing work, she currently teaches courses in Experimental Film, Video Art, and Art History at Saint Michael’s College and Burlington College.

In her own words, Weisman says that her work “examines subconscious and psychological spaces in order to challenge notions about the stability of personal identity, ‘Nature,’ and time, often asking the viewer to travel on a journey where the need for literal meaning is temporarily suspended and the internal logic of the self or site is allowed to emerge from hiding. Through putting text and electronics in an environment I am looking to see how that environment is altered or mediated by these representative technologies, and how meaning is created or dismantled.”

While Weisman was an exciting addition to the Impractical Practicalities series, Clute is nowhere near finished with the project. “It is overwhelming how many innovative and talented people are in the world,” he said. “This series intends to find them, bring them to JSC and share their experiences within our community. The series is important because it demonstrates the power of imagination, collaboration, and innovation. The presenters have unique experiences that will hopefully inspire students to keep open to experimentation and not be afraid of failure.”