Seven Stories of sound, all of them loud 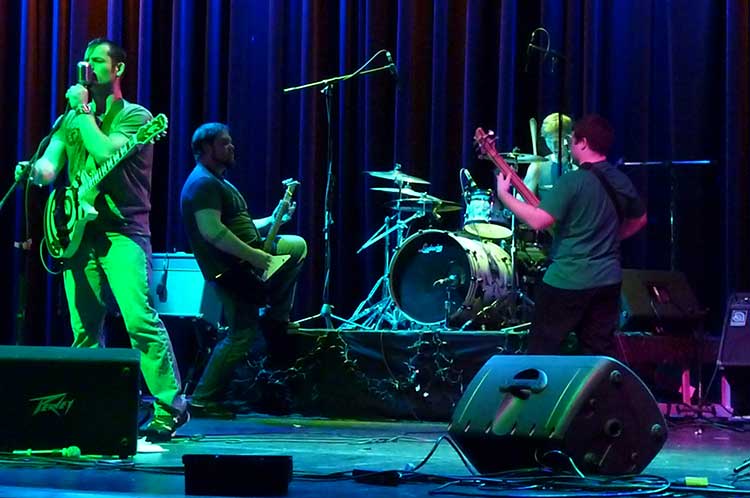 Seven Stories violently assaulted my eardrums when they played Dibden on March 2. They did so with plenty enough aptitude for me to pass up pressing charges, but whether they deserved criminal charges depends on one’s attitude toward sonic battery. If you get your kicks having your ears screwed six ways to Sunday, Seven Stories’ music is not only not a crime: it deserves a Grammy.

It was Hopper’s first-ever performance. They were pretty darn composed, though that’s easier for a two-man guitar duo than for a full-on rock band. Audy joined them for an instrumental opener, which they played with the kind of simultaneous tightness and looseness usually brought out by experience—a good sign for first-time performers.

Most of their songs were originals, which was refreshing: a cover band’s rarely more than a novelty, but seeing the premiere performance of a fledgling group with a handful of originals is like the birth of a star.

The first original was Paul’s, a song he’d written for his brother and his brother’s wife, which he played at their wedding. “We fell in love,” he sang, “as we danced through the stars.”

His first original came out of his love of motorcycling. He sang, “Thunder of the engine fuels the fire that burns in his soul.”

His second original put forth that “good things in life/are worth fighting for,” and featured a protagonist who “followed his heart to a medical degree.”

Hartman is of the Springsteen/Mellencamp school of theatrical road-mythology rock. It’s disarmingly honest and accurate at its best (Springsteen) and nauseatingly lunky and dumb at its worst (Mellencamp). Hartman doesn’t have to worry about better or worse: he’s tall and looks like a lumberjack, as Paul pointed out, and he’s plenty competent with a guitar.

“Coffee” was their strongest original, a little ditty Paul wrote when he was a junior in high school. Hopper’s performance wore the intoxicating perfume of Nineties alt-rock, a jangly, pained optimism recalling those masters of unassuming Nineties alternative lament, Toad the Wet Sprocket. “Coffee” was that sense concentrated. It didn’t seem like nostalgia, either, because these guys meant it. Their lyrics stink of construction, but their music naturally flows. These are good-intentioned, competent guys who just want to play.

First up was “Skin and Bones” from the Foo Fighters. “Skin and Bones” gave Hopper a few loaded bases, to bring out the baseball metaphors, but their final song, a cover of Aerosmith’s “Pink,” was a home run. Audy sang lead vocals for both.

It was during these performances Audy made it bluntly clear that he’s a powerhouse. He threw himself into his singing without fear, armored in fervor, and he took the same approach as a guitarist. Audrey dwarfed Paul and Hartman (no big deal, since they were playing their first-ever show), but there was no one on stage whose energy was comparable to that of Audy. If their energy was candle flames, Audrey was rocking a flamethrower.

Audy closed Hopper’s set by saying that Seven Stories had at least one thing going for them: they’re loud.

He was right. They were loud.

Seven Stories, the purported main attraction, made setting up Hopper as the opening act seem like a snickering joke. They play hard grunge bordering on emo-rock. They are Audy, Axel Handy on bass, Jeremy Sanborn doing lead vocals and guitar and Seth Ryan on the drums.

These guys play hard, and what they play is hard to listen to, and not just because of the volume. They’re damn good at what they do: they made quaint little Dibden feel like a heavy metal arena. The issue isn’t how they play, it’s what they play.

What one takes from Seven Stories depends on what one takes from thrashing rock. It seems to me like thrashing rock eschews rhythm, purpose and the kind of spiritual nakedness that comes from an honest combination of both in favor of eruptions: sonic explosions and a cycle of lyrical apocalypses. It’s a lot of beating without getting anywhere – not the kind of party that milks life, but the kind that tells life to shove it, again, and again and again.

If you disagree, you’ll probably love Seven Stories, and why not – they’re just out for a good time, and they’re talented at what they do. Even those who agree with my opinion of thrashing rock have to admit that Seven Stories delivered just what Audy promised. They were really friggin’ loud.