“Resident Evil: Retribution” a triumph for the living 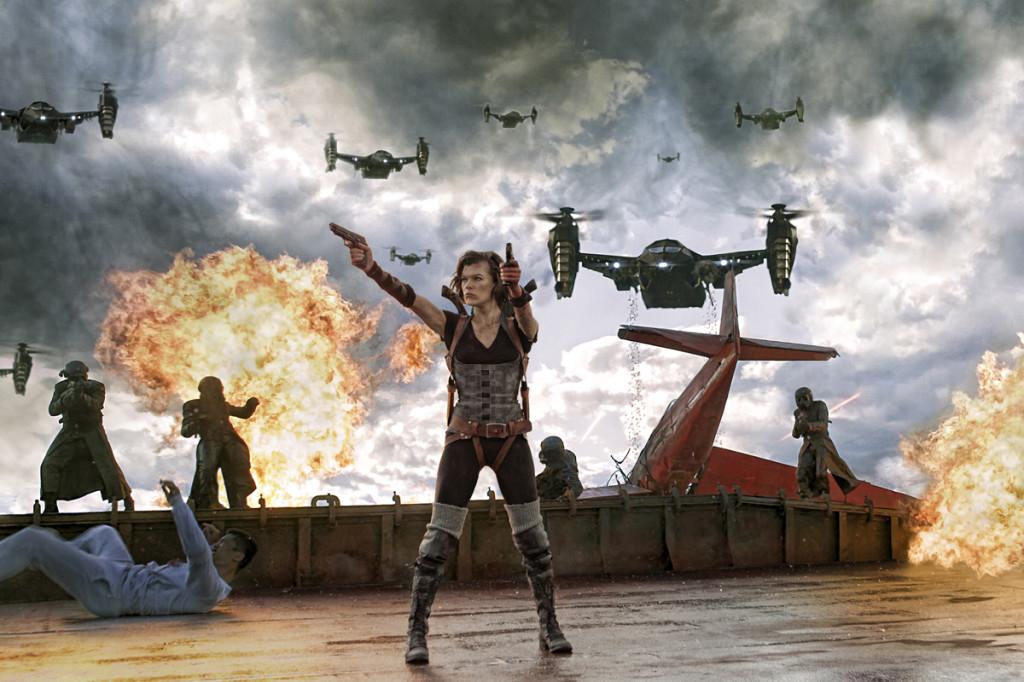 The critics who have bothered to sit through “Resident Evil: Retribution” say it’s the most banal, tedious entry yet in what one online reviewer called the “bafflingly, inexplicably endless” “Resident Evil” series – so naturally it’s the best “Resident Evil” film yet, and one of the most beautiful American films of the year.

The only thing baffling about this series is how it can continue to grow by leaps and bounds with each movie. “Resident Evil,” written and directed by Paul W.S. Anderson and released in 2002, is grossly underappreciated: it’s an amazingly gripping, fluid movie, and wonderfully humanistic to boot. Many people who dismiss Anderson’s “Resident Evil” – as well as the rest of the films in the series – would have preferred zombie guru George A. Romero at the helm, who was initially hired to write and direct the film.  Romero makes movies about zombies with humans supporting the story.  Anderson makes movies about humans: the zombies are springboards for his human exploration.

That’s the deepest appeal of the “Resident Evil” movies: we go to see humans put in their best efforts against the darkest imaginable odds and explosively triumph, almost without flinching, justifying our place in the universe. The other fundamental appeal of these movies is the fundamental appeal of all movies: “Kiss kiss bang bang,” as Pauline Kael wrote – we go to see sexy people blow the shit out of everything. These are two of the clearly explicable reasons for this series’ success.

“Resident Evil: Retribution,” the fifth film in the series, starts moments after the fourth film (“Resident Evil: Afterlife” [2010], which was magnificent).  Alice floats underwater in a Christ-like pose, floating toward the surface.  Everything is ethereally blue.  Another shot reveals that she is not just floating toward the surface: she’s being pulled out of the water.

It’s an all-out battle on a tanker – in reverse.  Balletic action moves re-fold. Explosions are sucked inward.  Bullets dance on the hull, then glide back into the gun chamber. The legion of attacking soldiers – in what look like Hazmat suits – withdraw into the massive attack heliplanes.

The sequence’s balletic grace is completely unique to Paul Anderson’s films.  Only Luc Besson (“Leon,” “Nikita,” “The Fifth Element,” writer-producer of “Taken,” the “Transporter” films and “Colombiana”) has a similarly graceful approach to the action scene.

(Note that Paul W.S. Anderson is not the same Paul Anderson who wrote and directed “Boogie Nights,” “Magnolia,” “Punch-Drunk Love” or “There Will Be Blood.” That’s Paul Thomas Anderson, and he’s a lot less hopeful than W.S.)

Anderson’s story structuring has never been so creative (and he’s always creative). Christopher Nolan relies on jarring editing to make his storytelling seem unique. Paul W.S. Anderson builds his film around surprising sequences, which actually makes his storytelling unique. He turns plot progression into cinema: a sequence in which Alice appears to wake up in another life, a suburban mother with a dapper husband and a child, Becky, prefaces a revelation late in the film that would simply have been a “plot twist” in most movies (and picks up the theme from Steven Spielberg’s “A.I.: Artificial Intelligence,” and stares it down with wonderfully obstinate hope).

Becky’s mute, which would be a source of existential burden or some such whiney horseshit in a Sam Mendes flick. But for Paul Anderson, Becky’s muteness is as much a part of her identity as Alice’s hair or the zombies’ undead flesh: Anderson can’t even imagine it as a burden.

It’s another example of the kind of emotional maturity Anderson showed in “Death Race,” in which the death of Jason Statham’s character’s wife and the loss of his daughter isn’t an excuse for him to hook up with the hot Latina chick he meets in prison. Statham’s character never even shows a flicker of sexual interest: all he wants is his daughter back.

Anderson has a daughter of his own, with his wife, Jovovich (no wonder his characters remain faithful to each other). “Resident Evil: Retribution” becomes a nightmare family fantasy, like “Aliens.” Alice’s first meeting with Becky is simple: Becky tightly hugs Alice, closing her eyes, while Alice stands still, overwhelmed. Even great filmmakers might need time to convince us of the emotional sincerity behind a scene like this. Anderson doesn’t need any time: the emotional sincerity’s right there on the screen from the start of the movie to the finish.

That’s probably part of why “critics,” goddamned hipsters, the lot of ‘em, dismiss Anderson’s work. Video game movies aren’t hip. Many younger audiences (the real dictators of what reviewers define as great movies) believe that complex presentations of simple ideas are worth more than distillations of complex ideas. These reviewers have been trained to ignore visual brilliance: their idea of a good-looking movie is just lighting by Wally Pfister or Jeff Cronenwerth, Chris Nolan’s and David Fincher’s respective cinematographers.

Nolan’s movies are blockbuster pulp. Fincher’s are C-movies fattened to blockbuster scale. They look dead. But Anderson’s movies are explosively alive: his oft-mocked use of slow-motion isn’t brain-dead gawking, it’s pure wonder over motion. When was the last time Nolan or Fincher showed a sense of wonder? When was the first time?

Anderson uses 3D better than anyone else. He plays with the space between 3D planes (the kind of thing we might expect if Ridley Scott had directed “Blade Runner” in 3D). His color palette is as vibrant as Anderson’s filmmaking or the characters’ humanity. It’s as bright as Nolan-Fincher movies are dark, just as Anderson’s best movies are as alive as their movies are dead.

The actors are similarly colorful. Milla Jovovich is even more interesting, her acting’s even more passionate, than she and it was 10 years ago, when the first film came out. Sigourney Weaver’s Ellen Ripley wasn’t this interesting after four films, maybe even after two films. Alice continues to inspire, excite, intrigue, and, not just because of these reasons, turn me on: there’s nothing sexier than a resolved humanist. This is probably the answer to model Jovovich’s marriage to geek filmmaker Anderson.

“Prometheus” came out this summer, the fifth entry in the “Resident Evil” series’ dark counterpart, the “Alien” movies. “Prometheus” isn’t half as bad as many people say, but there’s no doubt that its counterpart fifth entry—“Resident Evil: Retribution” – is a hell of a lot better. Ridley Scott directs with the gluttony of a top-of-the-food chain multi-million-dollar filmmaker. Paul W.S. Anderson directs with the wonder of a human-scale storyteller given multi-million-dollars.

There’s no better place to start examining film from an emotional-spiritual perspective, separated from the apathetic mainstream “critical” opinion, than with Paul W.S. Anderson’s films. Appreciating the honesty and value of this filmmaking separates we humans from zombies.