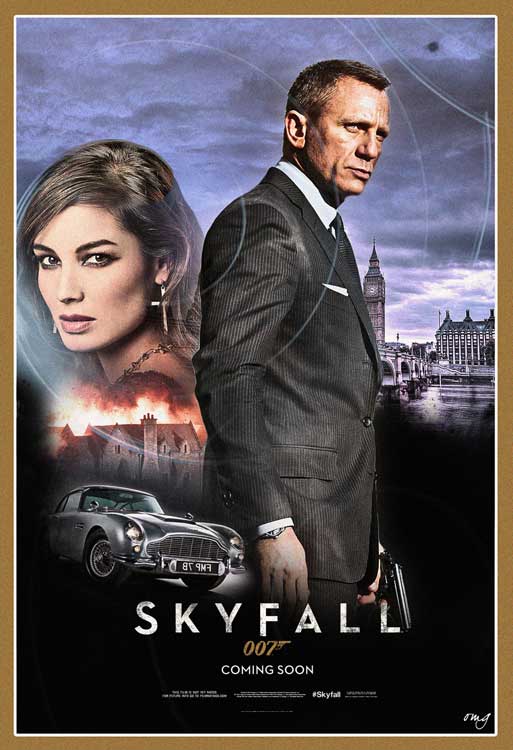 “SkyFall” is coming so close to death’s lips we forget there’s no possibility of a kiss. “SkyFall” is attracting the most beautiful woman with sleek ease, sexually diving into the beauty without a chance of anything but pleasure. “SkyFall” is an avalanche of impossibility drowned in a sea of creative thinking. “SkyFall” is the peaks of existence without the consequences of life or the weight of living. “SkyFall” is James Bond.

The James Bond world’s constraints are Sam Mendes’ liberation. Mr. Mendes, the director, has made movies about angst, like “American Beauty,” or “Revolutionary Road.” Now he looks down the 007 gunbarrel and sees life. James Bond has never inhabited such a widescreen world – these shots are as wide, vast and spacious as a sea. The world seems as big, and colorful, as it truly is, especially for James Bond. Imagine a Bond film directed by Orson Welles.

Bond rides a platform over the water toward a Chinese casino, lit by passion-red candlelight and brilliant yellow neon, as fireworks blow in the night sky. He takes on an assassin in the top floors of a skyscraper: they fight in deep blues and greens from a computer-generated logo outside. No Bond film has ever been so visual. Mr. Mendes and the cinematographer, Roger Deakins, have revived the Bond world of the Sixties: a world of luxurious splendor, a movie texture like smooth red velvet.

John Logan, the screenwriter, was a playwright before he was a screenwriter, and it shows: The scenes have a playwright’s sense of intimacy and tension. We aren’t watching a Bond movie so much as living through one. The confrontation scenes are so electrically performed and filmed with so much attention on the characters that they seem like high drama. Mr. Mendes’ strong suit is his attention to actors. He pays as much attention to the actors as he does to the shots. So one can imagine the dramatic fireworks lit by the combination of Mr. Mendes’ appreciation for acting, Mr. Logan’s background as a playwright and this cast of acting savantes. Their complement circles Berenice Marlohe’s Bond girl like electric smoke. She’s directed and filmed as a femme fatale worthy of “Double Indemnity.” Marlohe’s performance is wrinkled by time, and age, and death and transcends all these things in its human beauty, the beauty of contrasts: the contrast between the quiver in her hand as she puts a cigarette in her lips and her perfect smile, between the terror in her big dark eyes and the symphonic grace to her moves.

Javier Bardem plays the best Bond villain since Auric Goldfinger. He’s so like us — he’s the only character in the film with a sense of dramatic irony. When he finally catches up with his target, M (Judi Dench), in an old church, he smiles in wonder. She’s become his Holy Grail, only she offers the “peace” of eternal death instead of eternal life. “Of course!” he says — he’s just figured it out — “It had to be this way!” We’re at the same place. This is just one of many moments of Godardian self-awareness in Mr. Logan’s screenplay, the best of which is Bond’s answer when Mr. Bardem’s character asks him his hobby: “Resurrection.”

That’s the theme of “SkyFall”: Is James Bond a 20th Century relic? Can James Bond still be relevant in 2012? Mr. Logan also wrote “Star Trek: Nemesis,” the last “Star Trek” movie with Captain Picard, which was destroyed by its director, Stuart Baird, the editor on “Casino Royale,” “Quantum of Solace” and “SkyFall.” I bring it up because “SkyFall” echoes “Star Trek II: The Wrath of Khan” from the themes of age and relevance to the yin-yang/Kirk-Spock relationship between Bond and M, right down to dramatic beats and even a musical cue in the climax. And just as “Khan” shows “Star Trek” is more than just a young man’s fantasy, “SkyFall” proves there will never be a time when James Bond isn’t relevant.

The Bond movies are subtly political, in an edible way. “SkyFall” has the most delicious politics of any Bond movie. Ralph Fiennes’ character, the Chairman of the Intelligence and Safety Commission, dismisses Bond as someone fighting shadows that don’t exist. He also warns M about “fighting a war we don’t understand and can’t possibly win,” invoking 9/11.

M gives the best summary of the world political climate in any recent movie. She says, and this is just part of a glorious scene, “The world isn’t more transparent. It’s become more opaque. Our battles are fought in the shadows,” — the very shadows inhabited by Agent 007.

She also says our enemies are “not nations, they’re individuals.” True! “SkyFall” is about the same kind of social chaos as “The Dark Knight,” but this is the realistic, optimistic version. The point of “SkyFall” is a clear statement of the Bond movies’ code of honor. The Bond filmmakers have always believed in morality, honor, and loyalty to humanistic ideals. This code of honor is what separates the best of us from the worst of us. Mr. Bardem’s villain is so chilling and memorable because the only thing that separates him from James Bond is Bond’s unflinching and total devotion to his code of honor.

The Bond films are the ultimate visceral movie entertainment because they stand for this code of honor and package it in pure cinematic excess: kiss kiss bang bang, as Pauline Kael put it, the fundamental appeal of movies. We want to see our battles blown up to global proportions, heartache given to guns and love without closed doors.

There can no longer be any doubt we’re living in a Second Golden Age of Bond Films. Mr. Craig lives in the Bond themes — the fearless daring, the sexual suavity, the politics of global cooperation — deeper than any Bond actor but Sean Connery. “SkyFall” can hold its own against “From Russia with Love,” “On Her Majesty’s Secret Service,” even “Goldfinger.” Show me a person who can resist kiss kiss bang bang this rich and I’ll show you a fractured soul.