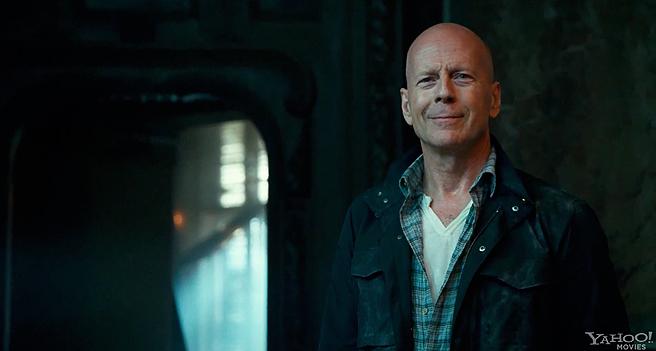 If I’d dreamed the best “Die Hard” movie ever, it wouldn’t be as good as “A Good Day to Die Hard.” It’s a movie we can feel: there’s a texture and richness to it, an in-your-face quality, but not the “Bourne Identity” kind of in-your-face, though the editing is fast. It’s the kind of in-your-face you get with a beautiful lover.

The grain is pores. The lens flares are deep blue eyes.

The colors – deep, sensual gold, blue, the director’s even made grey seem sensual – are curves.

And the action, well – it feels like making love.

It’s bullshit-free. No beating around the bush. It’s a father-son story – John McClane (Bruce Willis) goes to Russia to find out what the heck’s going on with his son (Jai Courtney, from “Spartacus: Blood and Sand”) – but nobody’s trying to make something as deep and rich as “Indiana Jones and the Last Crusade.” Exposition stays at a lean, muscular minimum. No wasted energy: the dialogue throbs. The McClanes bond over the reason they exist in the first place: action.

The screenplay thrusts out of titillating exposition and into overwhelmingly thrilling action – when the McClanes burst out of a skyscraper window, crash through a rickety construction stand outside and plummet down a rubbish tunnel, it’s so lividly kinetic I was in lingering orgasmic bliss all the way to the next action sequence.

The director, John Moore, another brilliant visualist like Michael Bay or Paul W. S. Anderson whose penchant for B-grade action flicks has put a blindfold over almost everyone who’s ever seen his movies – John Moore has an amazing sense of kinesthetics.

Every shot is perfectly angled to give a sense of location – John McClane doesn’t go to Russia alone: we go with him! We breath the Russian air, smell the Russian scents, feel the Russian light and walk in the Russian shadows.

It’s as if Moore disregarded stylistic angles for a sense of almost documentary depth, the kind of thing Ridley Scott shot for in “Black Hawk Down.”

Don’t get me wrong, Moore has a great sense of style: when the camera is stationary instead of handheld, you quickly learn you’re in for a treat. Those stationary shots are usually extended, slow-motion visuals to put Zack Snyder to shame.

They’re more exciting than Snyder’s shots, but they aren’t as artistic as Michael Bay’s, either, because Bay shoots for the kind of photography that’ll make you gasp, that shoots right for your soul, whereas our old friend John Moore shoots for motion pictures that’ll get your heart beating against your ribs like an inmate against bars. Bay shoots explosions, Moore shoots fire.

He shoots steel, too – in this case, Bruce Willis, who makes “A Good Day to Die Hard” the best audition tape for a modern John Wayne I can remember.

The filmmakers have stopped f—ing around with the audience, pretending John McClane is just Joe Misfortune, the luckiest unlucky man in the world – “Whoops! Sorry, there, Mr. Terrorist! I slipped right into your plot. Ya know this happened to me last week, too?”

“Live Free or Die Hard” (2007), the fourth “Die Hard” and the first one since 1995, finally acknowledged that so long as this keeps happening to John McClane, and he keeps rocking it, he’s got to be a superhero – it’s ridiculous to pretend otherwise.

Now McClane embodies conservative American values in “Good Day.” He’s tough as hell: always cracking wise, never breaking down, punching anyone who gets in his way.

In one scene, McClane Jr., part of our modern “apathetic” generation, is tired, discouraged, wants to give up.

McClane Sr. tells him a story about a time Jr. balled his eyes out when he was a kid and mocks him until his son is too pissed to listen anymore.

In “A Good Day to Die Hard,” John McClane is the conservative American’s fantasy: America as a righteously masculine, aggressive force that punches out all the bad guys until there are none left.

The Rolling Stones’ “Doom and Gloom,” a new Stones song about how awfully glum and gloomy we are these days, rocks through the credits, the final clue that this isn’t a movie for gloomy, cynical moviegoers looking for something heavy and serious like “American Beauty.” This is a movie for alive, loving moviegoers looking for something intense and true like American beauty.

Woah. How’d John McClane get himself into this one?