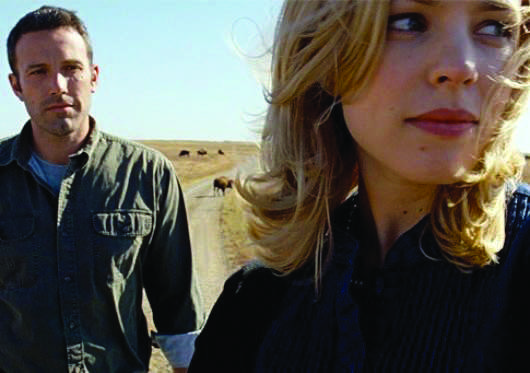 Ben Affleck and Rachel McAdams in “To the Wonder,” coming Apr. 12

April quietly and gently sneaks in blockbuster season like those sympathetic women we see in movies about immigration or the Underground Railroad. Then the blockbusters are found out in May, and from then on it’s a full-fledged sprint until they make it safely out of theaters come the fall.

It’s easy to miss the good films, or to fall into a bad film’s trap. Fortunately, your old Uncle Tom has spent time in the wilderness of American mainstream cinema. Let me help you avoid the bear traps clumsily dispatched to movie theaters across the country. Together, we’ll follow the path toward those beautiful, shimmering cinematic streams.

May 10: “The Great Gatsby.”
Foolish filming “Gats”
But “Moulin Rouge” Luhrmann did
With DiCaprio.

July 26: “The Wolverine.”
Hugh Jackman is back.
Wolverine noir in Japan.
Also Jackman’s back.

There may be better mainstream movies than these, and I’m sure there will be better movies in limited release, the kind three librarian couples watch in dusty darkness.

These movies are guaranteed to be worth something. They may not be great. They might not even be good. But if you’re on a date, your company will make up for it (hopefully). If you’re lonely or have time to kill, these will get the job done.

These are the safe paths around the bear trap.