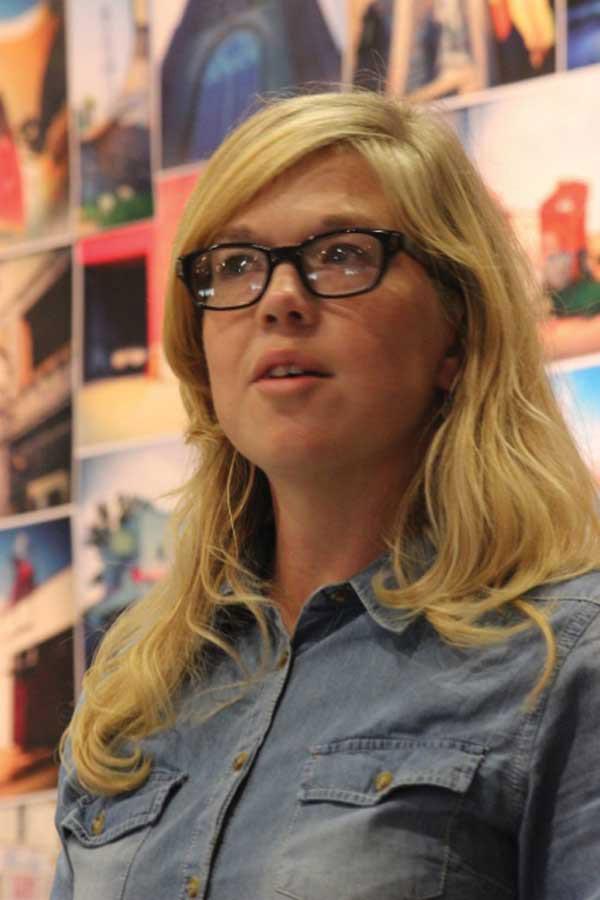 Currently being displayed in the Julian Scott Memorial Gallery is, “Detroit: Current Reflections,” by photographers Karen Guth and Emily Lanctot portraying the deterioration of Detroit.

The exhibition will be on display until Sept. 14.

Coordinator of Arts on Campus Leila Bandar invited Guth and Lanctot to Johnson State in connection with this year’s common reading book, “Detroit: An American Autopsy,” by Charlie LeDuff.

While both Lanctot and Guth frequently capture the disappearing history and culture of downtown Detroit through a camera lens, neither photographer had met the other until the artist talk Sept.5. They share many of the same views about the city, despite coming from different backgrounds in and around Detroit.

Lanctot grew up just outside Detroit, and Guth moved there from New York in the late 1990s.

“When I first moved there,” says Guth, “I was struck by everything that I saw there, but mostly I was struck by how empty the city felt. The city that is 140 square miles and had a peak population of 1.8 million now has about 700,000 people that live there. I took that in and thought about it for a long time, watching the city decline as I lived there. It just decayed over the 12 years I was there. It took me a long time to go down and start photographing, but when I did, I really wanted to try to catch on film what it felt like to be there. I was trying to capture that feeling of emptiness.”

Guth said that she couldn’t believe how, standing in the street of what once was the greatest city in the US, she could take a photograph without having a single car or person pass her.

After a while, she began to enter abandoned buildings to show what was left behind by those who fled. Schools still had food in the cafeteria and books on the desks. The school auditorium, which is displayed in the gallery, was demolished the day after the photo was taken, and has a grand piano in pieces on the floor. Houses still had shoes and top hats abandoned and forgotten.

Lanctot eventually moved away from Detroit to live in the Upper Peninsula of Mich., but beginning in 2005, she returned to the city regularly to film the barren streets, and destitute buildings that were once teeming with life before the decline of Detroit’s car industry.

“I was attracted to Emily’s video in 2010,” says Bandar. “I saw it in a gallery, and listened to the audio. I watched it for the seven minutes, and felt like it was leading me into a journey, not just to a place, but to someone’s life experience. It was a window into other peoples’ lives.”

Along with the video, Lanctot also sent Bandar almost 400 photos of buildings saturated with color, giving the place a gleam of hope while every house, every shop was crumbling to the ground. Most of Lanctots photos were taken from the window of a car.

“I’d start really thinking about it [the emptiness of the streets] when I was walking around in the city, because it didn’t feel like it was meant for you to walk around,” says Lanctot. “The roads are very wide. There are no streetlights, because they can’t afford to keep streetlights on all the time. Whole city blocks of buildings with no lights on. There’s a very eerie feeling when you go to the city. All you hear is footsteps. It always surprised me to be able to hear footsteps on a thoroughfare.”

All of Lanctot’s images displayed in the gallery are from this past summer, and she says every time she returns to the city something has changed. Bulldozers flatten entire blocks to put up town houses that all look the same. Houses burn to the ground in a matter of days, because nobody is there to rescue them. Lanctot and Guth have captured a history that could soon be gone.

Lanctot advises anyone who would like to see and photograph Detroit to be cautious, because if you get into trouble there aren’t enough police officers or fireman left in the city to come to your aid.