Become a well-rounded individual from the comfort of your home 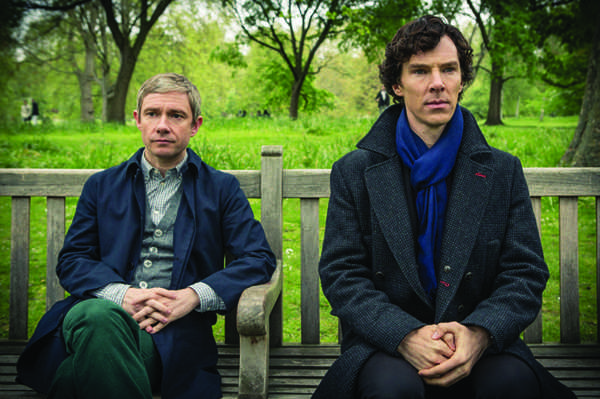 Those of you disappointed by the Jan. 28 “State of the Union” address, don’t worry: television goes on.

I direct your attention to three fresh series: the BBC’s “Sherlock,”  which has just aired its third season; NBC’s “Community,” which is airing its fifth season; and Cartoon Network’s “Rick and Morty,” which is closing in on the end of its first season. These series are, respectively, high-brow, middle-brow, and low-brow. A professor of socioeconomic hierarchy at Brown University assures me that watching all three transforms one into a well-rounded individual, possibly literally, depending on one’s diet and physical activity.

Let’s start with “Rick and Morty,” honoring the uniquely human tradition of starting low, then getting high.

“Rick and Morty” was co-created by Justin Roiland, who voices its protagonists, Rick and Morty, and Dan Harmon, who also created “Community.” The series’ premise is, basically: What if Doc from “Back to the Future” had been a raging nutjob alcoholic? Take an “a” from Marty and one gets Morty, who is Marty, Michael J. Fox’s character, as an underdeveloped shrimp with nothing going for him whatsoever. Rick is his grandfather, an endlessly brilliant and completely socially disconnected scientist living in the family garage; he belches mid-sentence and stutters as he absurdly rambles.

This is prime absurdist comedy. Kafka might shit his pants. In high-brow terminology, it’s “dumb.” It’s certainly more absurd than “The Simpsons;” it’s like a better “Futurama.” Without the vision-enhancing vitamins eminated from a low brow, high-brow viewers will probably dismiss this show as pointless.

The fact that it isn’t comes down to Dan Harmon. Harmon has filled the cult deity position vacated by Joss Whedon after he hit it big with “Dr. Horrible’s Sing-Along Blog.” Like Joss, Harmon is deeply humanistic, but unlike Joss, Harmon’s humanity extends beyond individual people to the race as a whole. He’s one of those rare talented entertainers who thinks better than he creates–not to denigrate “Community,” a good show in a sea of turds, or “Rick and Morty;” it’s just that Harmon’s writing about storytelling is absolutely genius. He’s extensively written about storytelling structure, breaking down Joseph Campbell’s story points into eight easily digestable story stages. He’s preached that if we follow structure to a tee, and coat that structural skeleton with the living flesh of a story that genuinely excites us, we have the potential to dredge up some captivating insights into our conscious and subconscious minds.

I can hear the cry of half a dozen bullshit detectors wailing in response to that sentence, but Harmon’s work is the proof of his ideas. Each week “Community,” apparently a cute sitcom about nothing, a group of misfit TV characters at a community college, bursts out of that storytelling skin like a snake riding a rocket. See how each episode follows Harmon’s eight-stage structure without exception. See how each episode seems completely unique. Note that Harmon follows a Campbell story point neglected by many Hollywood storytellers: halfway through his stories, his characters get what they thought they wanted; by the end of the episode, they’ve figured out what they really wanted, and learned from that.

The Dan Harmon description of story is this: a sexual thrust. We begin on familiar ground, we thrust into uncertain territory, and we come back out to familiar ground, having learned something, having changed, with the newfound ability to affect change on our universe, rather than the other way around. “Community” is fantastically focused lessons expressed through storytelling rather than blurted out at the end. It isn’t moralism: it’s humanism. This is also on display in “Rick and Morty.”

That little eruption of praise takes care of “Community,” but it’s also notable that Harmon was ditched as showrunner for the show’s fourth season (last year). This was well-documented by the media, due to the abruptness and carelessness of his dismissal. Fans protested, the cast protested, and voila, Harmon hath returned. Even his dismissal and subsequent, triumphant, rejuvenated, learned return to “Community” follows Harmon’s story structure.

We come now to our high-brow series, “Sherlock,” which aired two seasons and then went on a horrific two-year hiatus while its stars, Benedict “Sherlock” Cumberbatch and Martin “Watson” Freeman, played around in Hollywood. (Cumberbatch was in “12 Years a Slave,” “Star Trek into Darkness,” and “The Hobbit;” Freeman was also in “The Hobbit.”)

“Sherlock” may be the greatest adaptation of Arthur Conan Doyle’s stories ever. It is incessantly crafty; “Sherlock” updates Doyle’s stories in ways far beyond setting them in the present. They have metamorphised Doyle’s stories for today, in terms of culture, structure, topics, and filmmaking.

The Brits have never been the most cinematic filmmakers; British TV is basically the nursing home of motion pictures. “Sherlock,” however, is cinematic, from its hyperactive, creative editing to its consideration for image. No “Twin Peaks,” but it stands above other TV shows currently airing in terms of cinematic quality as Sherlock Holmes stands above other people in terms of deductive capability.

The third season of the series has just aired. One can find it in re-runs, and it will soon be on Netflix: three episodes, an hour-and-a-half each.   These episodes pay more attention to character than their predecessors. The same might be said of the “State of the Union” address, but “Sherlock” is superior in both style and substance.