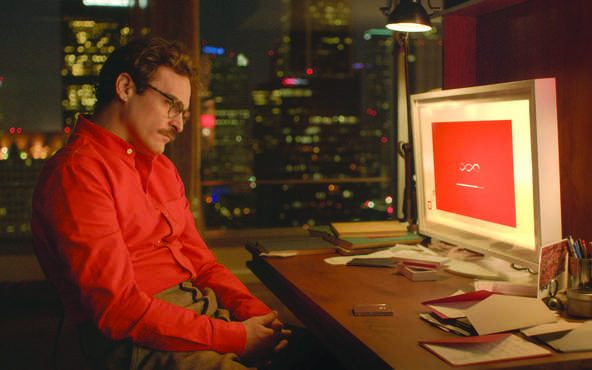 Have you ever fallen in love? Have you ever experienced the chest-felt rush of meeting someone new, someone who comes to understand you, who comes to rule your thoughts? Maybe you dream about this person. Have you grown with them, coming to know your limits and theirs? Have you ever felt the choking sting of a break-up or divorce?

Spike Jonze’s December 2013 release “Her” explores the definition of love and relationships in a refreshingly unconventional and slightly scary way. The film stars Jaoquin Pheonix, who plays a lonely, recently divorced writer named Theodore Twombly, who works for a company called BeautifulHandWrittenLetters.com.

The spiritual depth of Pheonix’s character is immediately noticeable. His inner monologue reads like a beautiful love letter.

This scene introduces the careful, dark humor of “Her.” The chat heats up. The awkward-looking and -sounding Twombly (he wears a hipster mustache and thick-rimmed glasses) is soon faced with the challenge of incorporating a very strange fetish into the dirty talk.

Twombly, like all men of the near future, wears retro, high-waisted pants, and a variety of classy throwback collared shirts. The clothing often complements the carefully constructed sets.

Many of the scenes in the film remind me of beautiful paintings. Much of the film hovers around the warm section of the color wheel; I remember reds and hazy oranges, pinks and muted yellows.

Director Jonze worked with costume designer Casey Storm and production designer K.K. Barret, both of whom worked with Jonze on his films “Being John Malkovich” (1999) and “Adaptation” (2002).

20 minutes into the film, audiences are introduced to the other main character. Samantha is an advanced operating system with a much sweeter voice than modern day Siri. Scarlett Johansson brings the O.S. to life in a believable and human way.

Samantha is a personal computer that quickly understands Twombly’s mysterious mind. A friendship is borne of knowing which hundreds of e-mails to throw away, knowing when to remind Twombly of his calendar, and saying “goodnight” every time the operator tucks himself in. It’s hard not to fall in love with Johansson’s light-hearted silliness and sincerity.

There is impeccable use of flashback in “Her.” This tool is used as well as I have ever seen it used in film before. The flashbacks serve as a vehicle for viewers to get to know Twombly’s soon-to-be (once he can brave signing the papers) ex-wife Catherine.

The flashbacks illustrate the relationship between the two with such depth that Catherine becomes a well-rounded character, even though audiences don’t meet her until well over an hour into the film.

The electricity of love powers Twombly’s life as his relationship with Samantha evolves from friendship to romance.

Twombly and Samantha date, Samantha in Twombly’s chest pocket, phone camera on so she can observe all he sees. On one date, Twombly runs around the city and subway station, to the top of a gloriously constructed building, where the two watch the blue sky and laugh. Twombly is smiling again, and the joy in Samantha’s voice is as true as can be.

The film had to tackle every aspect of relationship, including sexual passion. The sex scene between Twombly and Samantha is done surprisingly well. Samantha asks: “How would you touch me?”

The film offers an intimate portrait of the main characters, but also speaks to the larger population. One can imagine society quickly accepting befriending and even dating these newly introduced O.S. entities.

The supporting cast is also amazing. They add dimension to Twombly, and also serve as examples of others who are living within various stages of companionship and love. Chris Pratt (“Parks and Recreation”) plays Twombly’s co-worker Paul, and Amy Adams (“Man of Steel,” “American Hustle”) plays Amy, a longtime friend of Twombly who lives in the same fancy apartment complex.

I left the film feeling conflicted about the idea of love and the possibility of finding someone to spend the rest of my life with. The film is as bizarre and as tempting as the real-life notion, and if there is one thing I take away from the film it is that human companionship is the most treasured and potentially the most dangerous part of life- but it is always worth it, so go ahead: make friends and find love.

(Afterword: Spike Jonze won the Golden Globe for “Best Screenplay” for “Her,” and has been nominated to win the Oscar for “Best Motion Picture.”)