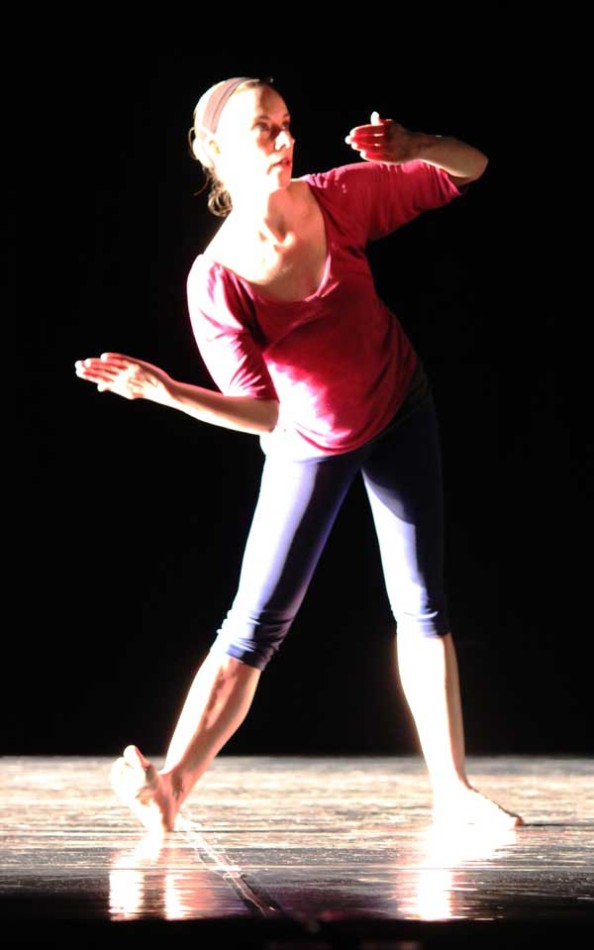 A dancer in the midst of Double Vision

Clute’s work has been presented at The Kitchen in New York City, the Yerba Buena Center for the Arts in San Francisco, the Autonomous Mutant Festival in Oregon, and the Shabla Solar Eclipse Festival in Bulgaria – to name a few.

Jennings’ work has been performed at the San Francisco Museum of Modern Art, the Merce Cunningham Studio in New York City, the Museumsquartier Wien in Vienna, the Institut Intermedii in Prague, the Ionion Center for the Arts and Culture in Greece, the Florian Workshop in Budapest, etc., etc.

Clute and Jennings have been around the world. Now they’ve finally been given the chance to do their thing at JSC, where Clute is an assistant professor of fine arts.

Choreographing “their thing” must’ve been as hard as describing it. It’s a dance performance, but without the order and flow – the melody – of traditional ballet or modern dance.

That isn’t a shortcoming on the part of Jennings or the dancers. It can be difficult to discern the order that is present in Double Vision’s performance, but it is certainly there, and it is intricate.

The performance was titled “Encrypted Trajectory.” Its mission statement, according to the pamphlet program: “to create a dance work where the overall goal reached through a trajectory is known, but the way in which to get there is unknown in advance to both the dancers and the audience. Unlike many stage works, this piece is largely emergent.”

A little more: “The dancers have all learned the same nine movement phrases, which they call upon much like a computer program would call upon records in a database. Which phrases [the dancers] should be using, and where they should be using them, is based upon a series of systems or rules designed by the choreographer.”

What it looks like: five dancers, all female, twirling, gliding, bending, twisting, and doing assorted moves just out of reach of common English. Sometimes it looked like robot yoga, but that phrase suggests clunkiness, and there was none. The movements did resemble yoga. They required great control, and a similar level of flexibility – not just physically, but mentally.

Dig this: “As individual movements trigger fellow dancers to move throughout the space, dancers collide within territories marked by tape [specifically: eight ‘cells’].”

This is all inspired by British mathematician John Horton Conway’s “Game of Life,” a cellular automoton (see Wikipedia–a description’s out of my league) developed in 1970, “which dictates survival between states of loneliness and starvation.”

There were industrial sounds; traffic sounds – brakes squeaking, tires splashing through puddles; and something like throat-singing.

The choreography was incredible. It must’ve required both specific focus and abstract intutition from Ms. Jennings. And there was more processing in the dancers’ minds than in Conway’s computer.

The dancers came from as far away as California. In a Q&A session after the performance, Clute said that one of the dancers had snowshoed her way to the dance studio after a recent snowstorm.

What did all this mathematical movement add up to? Precise chaos. Emergent beauty. The first truly unique organism to breathe and move across the stage in the Dibden Theatre of the Arts since its creation in 1970 – the same year as Conway’s “Game of Life.”