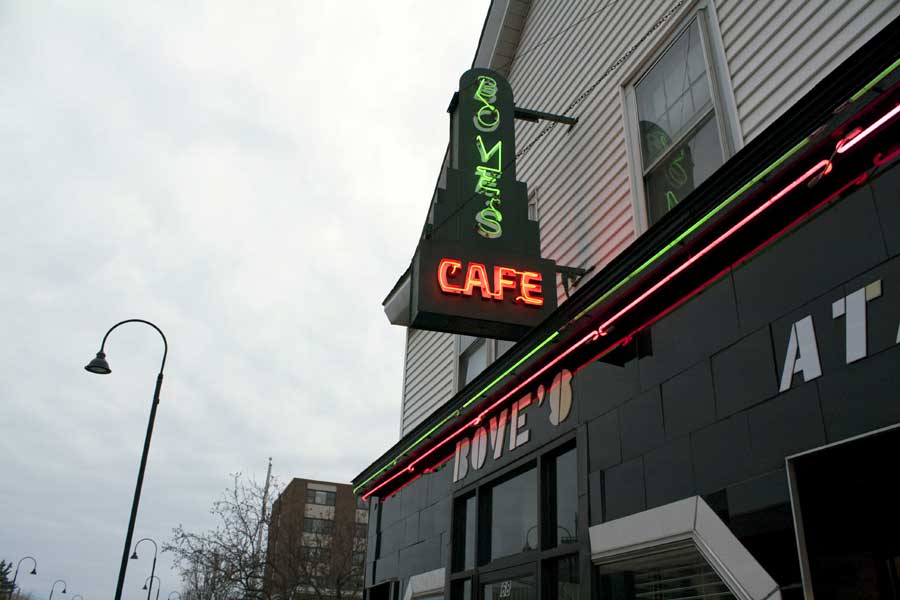 It’s not often I am able to go to Burlington and actually have money to spend on things. So when I do, I have to eat out, and it has to be good. On recommendation, I went to Bove’s.

On the outside Bove’s was pretty unremarkable. The neon sign was the only piece distinguishing it as a restaurant, but I attributed this to it being 73 years old. Still, I went in. Bove’s has been in Burlington since 1941 and has spanned three family generations, becoming an icon within the city.

As soon as I walked through the door, my eyes began to adjust to the dim lighting from the candles at every table and the dim chandeliers. The smells of Italian food entered my nostrils as I gazed across the faces of students and older folks alike.

The setup of the restaurant is simple; three rows of booths ranging from two to six people in size with just enough walking distance in between each row. As soon as you walk in, an ancient neon jukebox (which doesn’t work, as I soon learned) greets you, and towards the back is the smallest bar I’ve ever seen, followed by two doors where the magic happens.

The right side of the wall is a painting of Venice that stretches to the back of the restaurant. Bove’s is a mixture of contrasts. The Italian nature and dim lighting produce an air of formality, which is contrasted by a jukebox and booths, making it a place for any occasion.

So I sat down and looked at the menu. True to what I expected, Bove’s is an Italian restaurant. The menu has several types of spaghetti, veal, steak, traditional ravioli and lasagna, along with non-traditional items such as stuffed green peppers or cheeseburgers. However, the entire menu seemed to be focused on Bove’s “Signature Sauces,” which included vodka sauce, basil, roasted garlic, and Alfredo. After glancing up and down the menu my eyes stopped at the lasagna, which underneath said, “Featured on the Food Network – voted Best of the Best.” Just to make sure, I asked our waiter what the best food on the menu was. He confirmed it to be the lasagna. My girlfriend ordered the cheese ravioli and meatballs. The prices on the menu are all $8 to $10 per dinner alone.

After we ordered, my companion and I did not have much time to make idle small talk as the food came in about seven minutes. I stared at my plate. The lasagna came in a bowl roughly the same size as the large bowls in Stearns. At first glance all I saw was a swath of sauce with a roughly lasagna shaped bulge coming from the center. My girlfriend’s food looked the same only with ravioli and meatball shapes.

While I was expecting something different, I was hungry so I dug in. At the first bite, I first tasted a saltiness followed by a traditional marinara flavor. It was soft, cooked so it falls apart in your mouth easily, but not easily enough to be considered watery. However, I wasn’t impressed.

I tried eating more but as I continued, my hunger decreased with the taste. The problem I had was not with the sauce, which tasted like a traditional marinara, but with the lasagna itself, which just seemed like something I could make myself.

I went on to try the ravioli after cleansing my palate to find that they were virtually tasteless. The meatball with it was delicious and had an excellent taste and soft texture, but didn’t quite make up for the ravioli. As I continued to eat my lasagna I honestly hoped that I would be done soon. While the portion size is very good and I was full by the time I finished, the meal overall was simply disappointing.

Bove’s is an interesting restaurant that filled me up, but would I go again on the rare night I have out? Probably not. My experience with Bove’s before was looking at its sauces at the grocery store and when I went on their website, this was all I saw. Also on the website were recipes on how to make the food itself.

What I got from this is that Bove’s sold out. The once traditional Vermont eatery that once served JFK has capitalized, and their focus is less on the restaurant but more on its sales across stores. Next time I have a craving for Bove’s I’ll go to the store, buy its sauce, and make my own lasagna. It will probably be better than the actual restaurant.