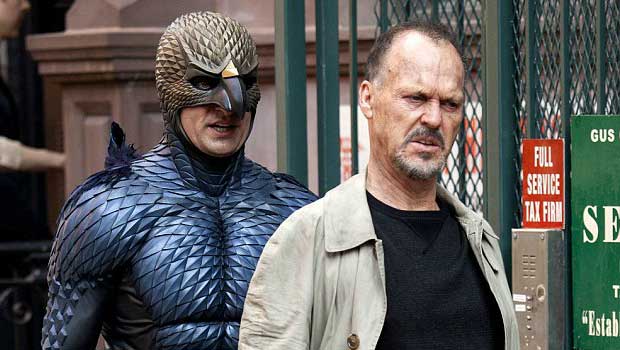 “Shh! It’s gonna be great, Michael Keaton! We’re doing it for you!”

The film’s premise concerns a former Hollywood star, played by Keaton, whose character played superhero “Birdman” in three blockbuster movies 20 years ago. He now seeks prestige performing his own Raymond Carver adaptation on Broadway. The premise is a fantasy drawing from Keaton’s starring role as Batman in two films directed by Tim Burton 20 years ago, and the subsequent quieting of Keaton’s career. Still, Keaton has said his character in “Birdman” is the least like him of any character he’s ever played.

Keaton’s performance has been proclaimed a tour de force and comeback, the same proclamation his character in the movie seeks. But leading scientists question that proclamation.

“He actually has very little material with which to show off his talents,” said science educator and TV personality Bill Nye. “His character spends 87 percent of the story hurrying around with a blank, anxious look. He operates more as a walking plot point than as a character, like a springboard for the other actors. There’s the least possible opportunity for him to show off the devilish flamboyance of Beetlejuice, or the complex charm-pathos of Bruce Wayne, or even the simmering violence of his character in ‘Jackie Brown.’”

Instead, scientists say, the true standout performance is that of Edward Norton, who plays the A-list star who signs on to Keaton’s characters’ play at the last moment. Norton’s character is based on the actor’s reputation for behind-the-scenes difficulty, ranging from strange method-actor requests to being drunk on stage to autobiographical plagiarism and f—king the director’s daughter, in this case played by Emma Stone.

“There’s a scene in which Norton’s character comes in to begin last-minute work on the play and insists on playing a scene without rehearsal,” said evolutionary biologist Richard Dawkins. “His impromptu performance shows an overwhelming burst of emotion, and an instant later, he’s smiling, saying ‘Huh?’ and waiting for Keaton’s approval. It’s like he’s defied gravity.”
But the scientific audience’s most surprising find is that “Birdman,” which has been praised by 94 percent of Rotten Tomatoes’ on-call critics, is, in fact, a turd.

The Rotten Tomatoes consensus, a general summary of approved critics’ statements, states that the film is “a thrilling leap forward for [the] director… an ambitious technical showcase powered by a layered story and outstanding performances.”
While scientists agreed with these critics’ assertion that “Birdman” was a technical showcase, they argue that technical showmanship is the only thing at which the movie succeeds.

“What a crock of shit,” Neil deGrasse Tyson said.

Asked to elaborate, he said, “The film has been shot and edited in such a way that it seems to be one long take without cuts. The result is dizziness, which makes some people nauseous and others hurl outright, in this case, emotionally – which a f—ktard could easily mistake for a sign of artistic authenticity.”

Tyson noted that this gimmick has been employed before, most famously by director Alfred Hitchcock in his film “Rope” (1948) – as well as by director Chris Carter in a 1998 episode of “The X Files,” titled “Triangle.”

“Surprisingly, Carter’s use of the long take might have worked best,” Tyson said. “He used it in an episode that involved time travel, murder, dancing, and espionage, while cutting between a World War II ghost ship and the J. Edgar Hoover Building… without cutting. I’d expect that story to be told with quick cuts for tension and tight, shadowy angles for nausea, a la Fritz Lang. Carter did the opposite, which was jarring, and pulled it off, which made what might have been a silly story thrilling.

“For a gimmick to pay off, he who gimmicks must use the gimmick as a contrast – not as the story’s lifeboat but as its iceberg. The trick is in narrowly avoiding it – not gracefully riding it away from the ship.”

Evolutionary biologist Lynn Margulis, whose theories have redefined the conventional understanding of evolution, said she would have to revise her theory to explain Alejandro Gonzalez Inarritu.

“His theories don’t seem to have evolved since he formed them, evidently at the age of 16,” Margulis said. “Note the sequence in which the character Keaton’s played, Birdman, physically manifests to tempt Keaton’s character back to Hollywood filmmaking. His voice is a hoarse grunt, like the stereotypical jock. He likes to talk about balls, and call people douches. He tells Keaton people don’t like depressing movies about talking: they like explosions, swift camerawork, action. He’s supposed to represent old shameless evil, but he’s absolutely right!”

Margulis pointed out that people are depressed enough without going to a theater to sit in their own emotional bile, though, she noted, there is a different between a tragic movie and a depressing one. She also noted various studies have shown no one wants to sit for two hours listening to people talk unless Garrison Keillor is involved.

“People like explosions and swift camerawork and action because they’re lively,” Margulis said. “The foundation of cinema is action, both in the images and in terms of the overall motion picture’s composition. Millions of people see Michael Bay’s movies because they want a thrill, not because they’re stupid. People paid millions seeing Wes Anderson’s last film, too. Anderson is known for his dialogue, but his filmmaking relies on action, from the composition of the frame to the dialogue to the emotional development and the camerawork. The same goes for Orson Welles or David Lynch, neither of whom would be so juvenile as to loathe their audience, condescend to them, and yearn for their approval. Even the apes I studied could see that.”

Charles Townes, who invented the laser, said he would like to shoot it at Inarritu.

“He uses humor like a bullfighter uses a red cape,” Townes said, “only Inarritu sits on the cape instead of waving it. The jokes don’t have the setup or contrast even a fart joke needs: he counts on the audience laughing at the characters’ sleaze or dry, cynical banter. Basically, he doesn’t push the button to activate his laser pointer: he just mocks the pointer and hopes to make us laugh.”

Craig Ventor, who completed the Human Genome Project, said, “My work on synthetic genomes is challenging our fundamental understanding of life. At least we have one. The only tragedy in Inarritu’s tragic tale is that there’s no life in it to mask a very familiar structure: hero’s desperate, hero makes a mistake, hero does the unthinkable and unwittingly achieves what he wanted all along. This is the work of a desperate amateur mistaking seriousness for profundity. You can predict the whole movie without even walking in… for example, there’s a scene in which Keaton’s character uses a gun in the play. After a critic savages him and he’s suicidally hopeless, what do you think is going to happen? A predictable plot is fine if there’s life in its telling, but there’s nothing here to experience: it just looks like one long handheld shot.

“His entire movie is made of artifically constructed cells.”

These scientists are not alone.

“Glad I missed ‘Birdman,’” said Roger Ebert, in a Ouija board interview.

Though the findings in their study of “Birdman” were negative, the scientists involved are optimistic about  girl-rockers Sleater-Kinney’s upcoming album “No Cities to Love,” their first record in 10 years, which will be released in Jan. 99 percent of scientists concur that the album will live up to the band’s high standards, with Richard Dawkins the lone dissenter.

“i THINK it. will BE GREAT,” said astrophysicist Stephen Hawking.