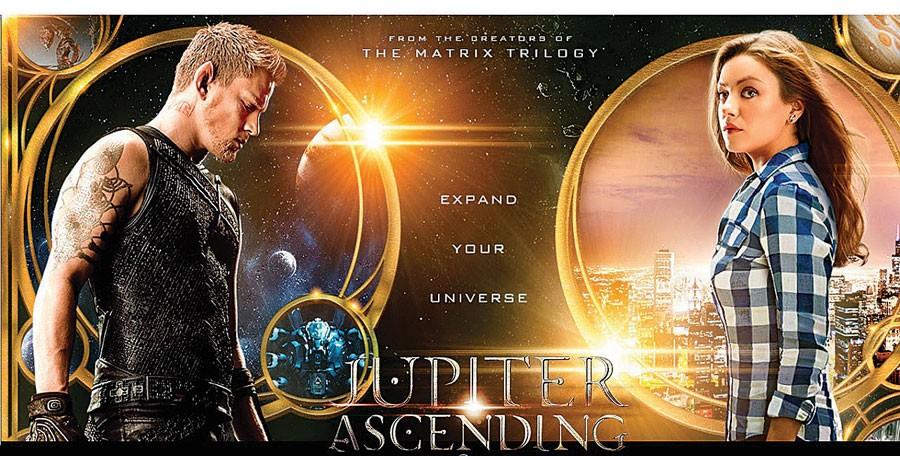 I hoped and prayed that the Wochowski duo (writers and directors) would blow my mind and create a new sci-fi action standard like they did 15 years ago with “The Matrix.”

“Jupiter Ascending” was going to be a revelatory experience. Channing Tatum’s dog-ears and goatee were going to transform him into the new Han Solo. Mila Kunis was going to be Katniss Everdeen and Neo mashed into one amazing heroine. Indeed the film was going to set a new bar in space-adventure, planet-saving flicks.

Instead, I left with a dwindling faith in Andy and Lana Wachowski. Their 2012 release, “Cloud Atlas” was 172 minutes, and any damn movie that dares to be that long better have the Academy in sight. “Atlas” was entertaining, but the story flopped and twisted through centuries in a way that was less than awe-inspiring.

“Jupiter Asceding,” has a plot that flops through space and is told way too thoroughly by its characters. It often connects dots that have already been connected, and disallows the audience from making connections with their own workable brains. Other parts of the plot flew over my head and were left unthreaded and abandoned.

The flick begins with the central figure of the space opera, Jupiter Jones (Kunis), a young Russian girl whose family trade is janitorial service. The rightful owner of the entire Earth is first seen scrubbing a toilet and selling her eggs at the advice of her comically assholish cousin. A few galaxies away, the three Abrasax siblings are mourning the death of their mother who died at a healthy age of 90,000 years young.

With her gone, Balem (Eddie Redmayne- “Les Miserables,” “The Theory of Everything”), Kalique (Tuppence Middleton- “The Imitation Game,”) and Titus (Douglas Booth- “Romeo & Juliet,” “Noah”) divvy up their inheritance. Their eyes are set on Earth, a key piece of real estate due to her plentiful resources. It’s a weak chiming bell that brings to light the actual real-life resource dwindling of Earth and greedy oil mongers who view dollar signs over planetary life.

Oh yeah, how the hell does one live to be 90,000? Good genes baby, and Earth’s humans are ripe for the picking. Harvesting planets for a youth serum is one of the lucrative endeavors of powerful alien societies, and the Abrasax family is top dog.

While being prepped to donate at the fertility clinic, the nurses transform into probing aliens. The probers were sent by the dapper and ruthless brother Balem who decides that killing Jupiter is the best way to get Earth for himself. In swoops Caine (Tatum) on his rocket boots (Heelys on crack!) and saves the day.

The genetically engineered Tatum is an ex-soldier sent by Titus, the younger, devious brother who plans on marrying Jupiter. The reason for the brotherly battle is told by Kalique when Jupiter visits her breathtaking alien castle. It turns out that Jupiter is the genetic reincarnation of the sibling’s mother, and as the late matriarch’s will states, the rightful heir to Earth.

The only things that stands in the way of Earth being sucked of all life is for Jupiter to ascend into and accept her royal place in the universe. And holy shit, when she finds out who she is . . . “Oh my god, I can’t believe this. I just can’t believe this. Wow. This is . . . ”

Those aren’t direct quotes, but seriously, where is the heart?!. I want a heroine who is passionate and complicated and who feels the weight of the earth on her shoulders because it actually is. This area of potential was replaced by Kunis who couldn’t get her doe-eyes out of the headlights. Her character seems too accepting of everything, while maintaining whims of naivety, and sadly, her inner badass never springs to its potential.

It turns out Titus’s marital intentions are not totally pure. And here comes the action. Caine saves Jupiter’s life many times, often with the help of friend Stinger Apini and his accompanying crew. They are all great at killing aliens with cool weapons. They blast aliens that look like small upright dragons, aliens that look like Orcs, aliens that look like aliens. The action sequences are fast and explosion heavy, with lasers, flying boots and cruisers zipping in and out of focus. Watching this in 3d left me with multiple headaches, and even though the scenes were cool to watch, they got old fast.

The best visuals were the alien world landscapes. On one end there were dark city views with lights piercing the cluttered, smoky, industrial parts of planets. This was paired with glorious shots of the royal cities with shimmering lakes and architecture that would make Ted Mosby splooge his pants.

I did enjoy that the setting of the film felt vast, and that multiple planets were backdrops for plot movement. Many scenes were spent in space, where dozen-winged dragonfly ships whizzed by, and other bulky crew ships armed with explosives ascended through space clouds of all colors. The cinematographer John Toll helped create environments meant to be seen on the big screen. Toll is best known for his work with “Cloud Atlas,” “Braveheart,” “Iron Man 3,” and “Vanilla Sky.”

Jupiter’s personal interest in defeating Balem comes too late in the movie with the capture and imprisonment of her family. I rooted for her and her chiseled dog-man-friend Tatum, but not wildly enough where I would say their ascension is something that needs to be seen by all. Wait until you can rent it for three bucks and make sure you have some beers nearby. Most of all, do like I did, and just comes to terms with the fact that the Wochowskis may never make another “Matrix,” and maybe your heart won’t be break after their next mediocre release.