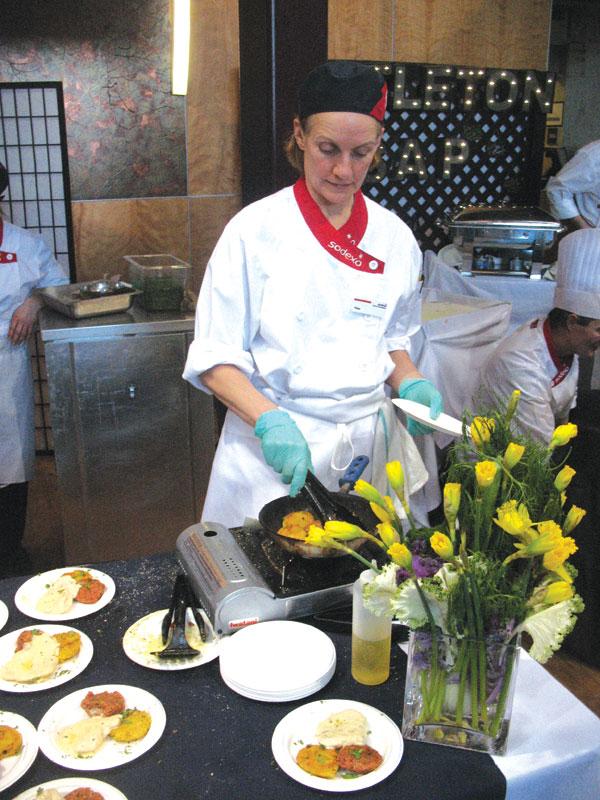 Luscious, succulent, flavorful, exotic, unique, ambitiously creative, exquisitely prepared and delicately presented by highly skilled, exceptionally experienced professional Sodexo chefs, The Vermont First Locavore Culinary Challenge was not an event to be missed. And speaking as a long-time professional chef, I am very glad I was there.

This was a competition where everyone in attendance was a winner. The atmosphere was filled with joyful energy, with students, faculty, staff and guests contentedly munching away.

The competition, which highlighted the culinary creativity of Sodexo chefs from Castleton State College, Champlain College, Lyndon State College, Johnson State College and Saint Michaels College, was held during lunch at JSC, which was a definite change of pace and a culinary adventure for all attendees – students, faculty, staff and invited guests.

Over 375 people enjoyed a range of innovative food prepared from local Vermont agriculture. According to Sodexo, “Dishes prepared for the challenge featured ingredients and products from 35 Vermont farms and producers.”

Chefs had a great deal of latitude in creating their own unique lunch menus for this particular competition.

While it might not be financially feasible to recreate the day’s offerings as standard daily meal selections in the respective Vermont colleges, it is entirely possible that many of the meals will make their way into students mouths and stomachs as individual schools adopt much of what was created for the event into standard food options – for lunch or dinners.

I spoke with Paul Bahan, Area Marketing Coordinator, from Sodexo, who shared that  “Vermont First was developed by Sodexo for state government and as a pledge to the State of Vermont. – When we are buying food and provisions from around the state, they (Vermont sources) will come first before we go to an outside entity. In order to honor that pledge, we are also building different relationships, as many relationships as we can, new relationships to bring people into the fold, so that we can get them online with us.”

According to Brian Roper, Sodexo’s District Executive Chef, the company is seriously committed to expanding its use of local food throughout its college operations. “Our objective is to increase the local food served on college campuses in Vermont,” he said.

From my perspective, the energy and passion of professional chefs competing was exciting, enjoyable and most importantly exceptionally tasty. Everyone attending the lunch was encouraged to vote for their favorite dish. A team of judges from the Vermont food community participated in the analysis of the chefs’ offerings.

Based on the votes tallied, Castleton State College placed third, with a Vermont BBQ Sunday featuring cheddar cornbread topped  with BBQ beef brisket and maple glazed bacon, served with a side of fresh beet celery root and apple slaw.

Champlain College took top honors for the day with a winter apple crepe. Crepes were made to order, filled with a mixture of local apples and apple cider reduction, drizzled with Vermont maple syrup and topped with local whipped cream. As an option, hot chocolate sauce was served to complement the dish.

Abby Willard, (who was on the judging panel,) from the Vermont Agency of Agriculture said part of her focus is on expanding local food production and consumption in Vermont. “My work with the Agency of Agriculture is about increasing the production and consumption of local food,” she said. “We’ve worked with colleges, healthcare facilities and schools to see them increase local food consumption. This event – This Vermont First Pledge is a nice celebration of trying new foods and exploring different ways to use as many different local ingredients as possible that are attractively presented and delicious. We have been particularly interested in Sodexo’s commitment to this Vermont First strategy of making a commitment to buying locally from local producers and seeing it served in their institutional kitchens. All of the foods presented are grown in Vermont. It is exciting to see this many producers with this much agricultural enthusiasm.”

Judging from the reaction of many of the diners attending, that enthusiasm was widely shared.