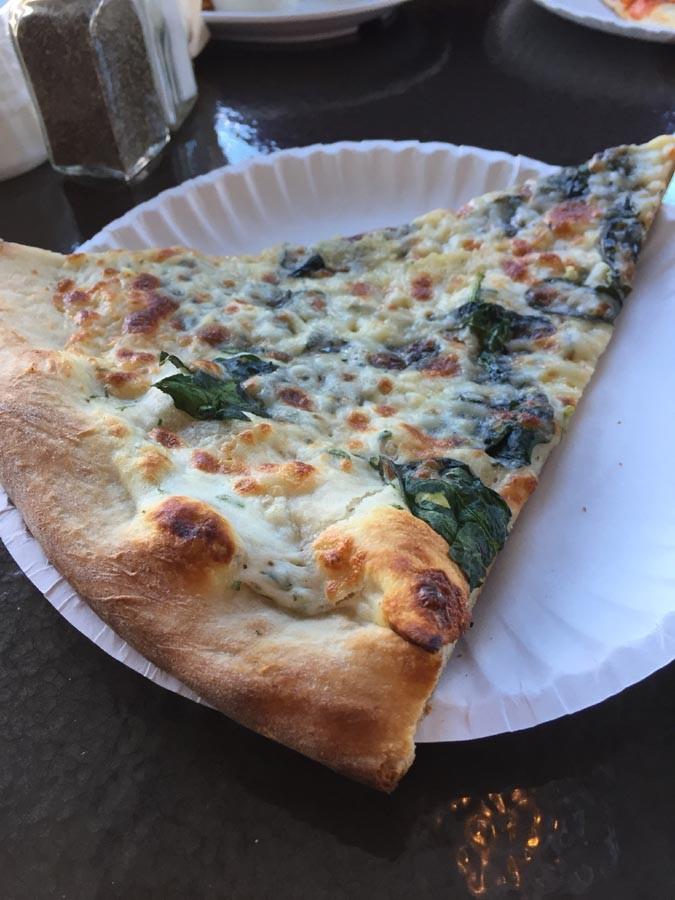 After visiting Pizza on Main, located where the Arthur’s clothing store resided for 40 years, I say: No, Morrisville didn’t need another pizza place, but it did need this pizza place.

Having opened just a few weeks prior to my visit, everything in and around the restaurant looks and is new. This includes bringing in a simple but modern styled black exterior to the main street of Morrisville, which is just subtle enough to fit in with all of the rustic looking businesses that  surround it.
The owners of Pizza on Main have a very simple goal that they are looking to meet: provide a place where all types of community members can gather, or grab a quick slice of traditional New York-style pizza.

They meet this goal and then some.

I was pleasantly surprised that Pizza on Main offers most, if not all, of their specialty pies minutes from ready to go, in slice form. The case that they’re displayed in also contains some of their calzone/hot roll options, leaving my dining companion and me satisfied with the mere minutes we had to wait for our selections. They also offer a wide variety of appetizers, salads, and subs called wedges.

Whole pies–baked in the traditional gas oven–go for $14 for a small (14”), $15 for large (16”), $17 for an extra-large (18”) and $19 for a Sicilian pie, which comes in square form. Pizza on Main also offers a 10” gluten-free pizza for $10. Any toppings are $2 extra for each, and the specialty pizzas have their own set rates ranging from $17 to $28. The most expensive option they offer is called the “Queen Bee,” consisting of pistachios, honey, caramelized onions and goat cheese. The “Queen Bee” is also one of the most interesting things on the menu, with the baked ziti pizza coming in at a close second.

I had a slice of both thin crust margherita and white spinach, while my companion had a buffalo chicken roll and a slice of buffalo chicken pizza. My total came in at $7.00, with $3.50 per slice. Each slice starts at $2.50, and then goes up $0.50 per topping. This seemed reasonable, since the slices hold true to the traditional wide NY-style, and each slice seemed like it was a little under the size of two slices from anywhere else.

My biggest concern around thin crust pizza in general is that it seems like there’s a very delicate line between a good one and when it’s burned. Both of my slices were satisfyingly crispy and perfectly browned. I got the feeling that they wouldn’t have even considered serving something that was less than satisfactory, anyway, based on the level of excited and talkative communication behind the front counter. I don’t know if everyone who works there is part of the same biological family, but they have definitely all formed a great relationship at work.

Aside from the crust, everything else about my slices also worked. There was a really good balance of the homemade sauce and mozzarella cheese on my margherita slice. The mozzarella was sliced very thin, but still actively added a lot of cheesy flavor to it overall. Each slice seemed almost premeditated, with there being a careful spread of basil on the margherita and of spinach on the white spinach slice. I was also pleased that the mozzarella and ricotta on the white spinach stayed put. Sometimes when cheese is cooked a little too much it will peel off from the crust, but this was not the case. It stayed in place, and locked in moisture, making for a second great slice. My companion was also happy with his selections, and started planning the next trip there before we had finished eating.

Pizza on Main presents a great dining experience for any type of customer. I can see groups of kids gathering there to hang out after school, and I can also picture my grandmother being impressed by the selection and feeling satisfied with options for her delicate dietary needs. There are options for the broke college student, to those willing to spend a little bit more for exotic combinations. No matter what the circumstances, it’s worth the visit.