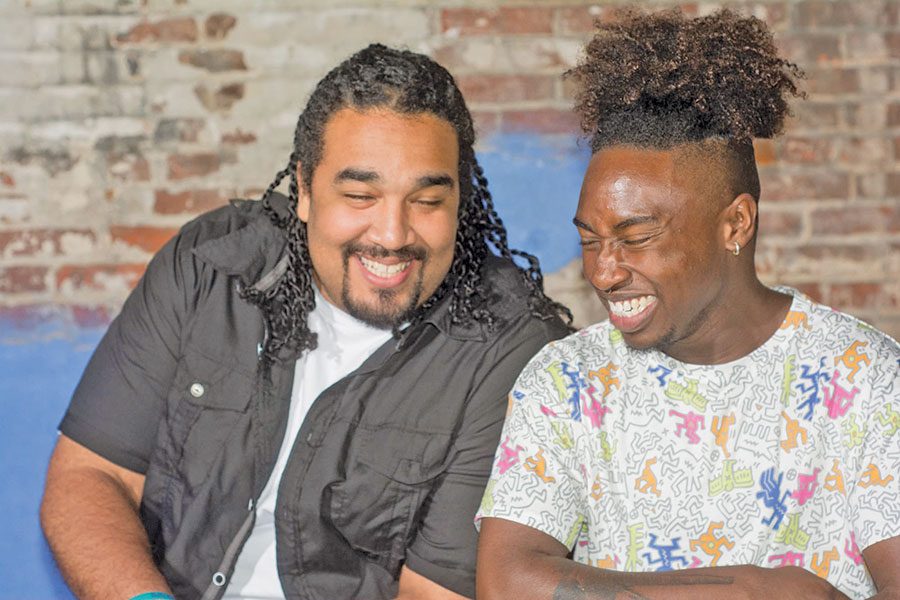 Kavi Ade and Vision are not only mending masculinity, but also spreading mass amounts of inspiration and healing energy one poetry performance at a time.

Both of them are nationally recognized poets and they use their performances and writing workshops in schools and other facilities around the country to generate conversation encompassing all forms of masculinity. They both provide a unique perspective, one being transgender-queer and the other cis and heterosexual.

On Sept. 18, the charming duo came to Northern Vermont University-Johnson in the Stearns performance space and recited some of their poems and gave dialogues relating to self-love and combating toxic masculinity. After their performance they stayed for a Q&A where they answered personal questions and shared powerful and funny stories.

The two presented great chemistry, playfully picking on each other between the emotionally heavy content in their poems. Their friendship was refreshing in the midst of the tension-filled concepts. “Give me some weenus,” said Vision, referring to the loose skin on the outside of Kavi’s elbow joint. It’s a friendly joke where they rub weenuses in front of audiences to make them uncomfortable, because weenus rhymes with penis.

Both men are African American, Vision being lighter skinned than Kavi Ade. Vision comically towers over Kavi Ade, at least a foot taller. Vision appears to be a large rambunctious teddy bear where Kavi Ade seems very gentle and poised in all of his movements.

They shared vulnerable memories of their past relationships and interactions they had with people who tried to shame them for their identities and bodies.

Both talked about their lack of a mother due to them not being able to accept them for who they are. Kavi Ade’s mother couldn’t let go of her grudge against him for being a boy, when she wanted him to be a girl like he was when he was a child. Vision’s Mother hated herself for being black and chose to raise Vision only because he was mixed, unlike the first four children she abandoned.

Vision read a beautiful poem and prompted us to write one as well, following the same principle. He told us to write a love poem to our least favorite body part of ours. He wrote his about his stomach, noting how insecure he felt in the gym knowing the expectation of men to have six-packs.

They addressed men’s constant need to be validated and how their retaliations to being rejected are violent and harmful. They encouraged other men to stand up against toxic masculinity and call out those who think it’s okay to disrespect others in order to stroke their own ego.

They encourage all to be an ally and if you have privilege, use it to your advantage to help others. They told an inspiring story about black students at a school being protected by their white peers by forming a circle around them and linking arms to separate them from the police.

Their poems were heartfelt and had great rhythm. Both men were great at performing, using their body language and facial expressions effectively. They knew when to take pauses and when to get caught up in the words so much they had to gasp for air at the end.

They suggest to those in the audience who want to peruse poetry or writing as a means to send a powerful message to look inside themselves and to be completely and entirely honest with themselves. That’s the only way it will be truly beneficial to you. As someone who would like to do so more often, I appreciated the reminder.

The audience seemed to receive their performance well, sharing many laughs and even a few cries. They encouraged the audience to join them in having a sip of water between poems. Some audience members raised their water bottles to them and said cheers.

At the end of the night, I felt compelled to care more about others and simply be compassionate. We should always be present in our lives in a way that we are proud of. I’d like to believe others walked away feeling a similar sense of contentment and realization.