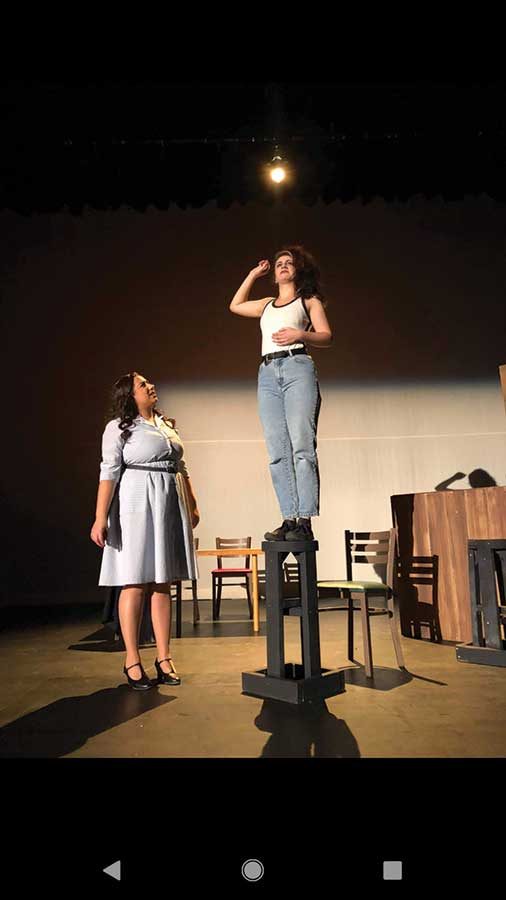 “Defying Gravity” was NVU- Johnson student Jessica DeRosa’s senior thesis project for her BA in theater and drama. DeRosa directed the show and gave a brief introduction before the play began.

DeRosa has been the stage manager of over 20 productions at Johnson but this is her first show as director on the Dibden stage.

“Defying Gravity” took place on the Dibden Center for the Arts main stage on Nov. 26 and 27.

“Defying Gravity” is written by Jane Anderson. The story is about the space shuttle Challenger and the subsequent disaster that shook the country in 1986. The morning of Jan. 28 that year, NASA planned to send McAuliffe, a teacher from Concord, New Hampshire, and six other astronauts up into space. McAuliffe would teach lessons in zero gravity, and these would be broadcast back down to earth. Horrifically, the shuttle broke apart less than two minutes into its flight, killing all seven crew members. Anderson’s play tells this story through the mind of Christa McAuliffe’s daughter, who was only 5 years old when the tragedy occurred.

At its core, “Defying Gravity” is about overcoming fear in order to live your dreams and see your potential to fly. Every scene was either tragic, funny, or heartfelt. I was very impressed with how many emotions this play brought out of me within its run of 90 minutes.

When the box office crew was leading audience members onto the stage for seating, I felt a little worried I would not like that set-up. Very shortly into the show I realized this was a smart decision as the actors did not have microphones. I also just enjoyed being closer to the performance because it did make me feel more involved in the experience.

All performers were dedicated to their characters and did a great job portraying them. They all showed chemistry and made some enjoyable dynamics on stage. Roman and Sargent portrayed a really convincing mother-daughter bond and Sargent impressively pulled off playing a 5 year old as a 19 year old. I also really loved the relationship between Rose’s and Kifner’s characters as an older, unaffectionate couple who later in the show become warmer towards each other. These two provided most of the humor in the show and were great at breaking up the tension in a non-forceful way.

One thing I admire a lot about Dibden productions is that they rely very little on props and elaborate sets. This production was very simple with the set being only a chalkboard, a table and a little bar set-up. They also had a projector that was used in some scenes that added to the set.

The stage manager was Corrie Aldrich and the scenic designer was Andrew Tascarella.

Jenna Knight was the assistant stage manager and the projection designer.

I’d say overall the most effective prop used was a small red Lifesaver candy. It wasn’t flashy or theatrical, but it held great power because of the influence it had on the story while being such a simple object. The prop master was Larissa Stride.

The most memorable and effective use of the lighting was during the scene where the space shuttle went up and the lights flashed to a harsh red when the shuttle exploded. This was a jarring scene and was done with grace.

The light designer was Jared Aldi and the lighting board operator was Chantel Haslam.

Some scenes had instrumental music playing quietly in the back ground. This play had a very calm tone and sound to it. The sound designer was Emily Pike.

A stand out character for me was Eugley. While he was reciting the letter he wrote to the teacher’s daughter after the accident, he became red in the face, shaky and teary eyed. This was a moment that was significant to his character because beforehand he’d been portraying a hard-exterior guy whose every other word was a curse.

Anderson, on top of being a performer, was also the costume designer. The costumes were all simple and fitting to the characters. Eugley’s character wore flannel, Constantine’s character wore clothes covered in paints and both Roman and Rose’s characters wore dresses. I really enjoyed the final outfit on Roman being a navy-blue space jumpsuit.

It was very satisfying to see the arc of every single character, making the play feel very cohesive. Sargents character was able to overcome her fears and forgive her mother, Rose’s and Kifner’s characters fell back in love and Eugley’s character proposed to Anderson’s character. I very much enjoyed this simple yet effective production and I appreciate the hard work of all the performers and DeRosa.