Isaac Eddy and the power of vulnerability 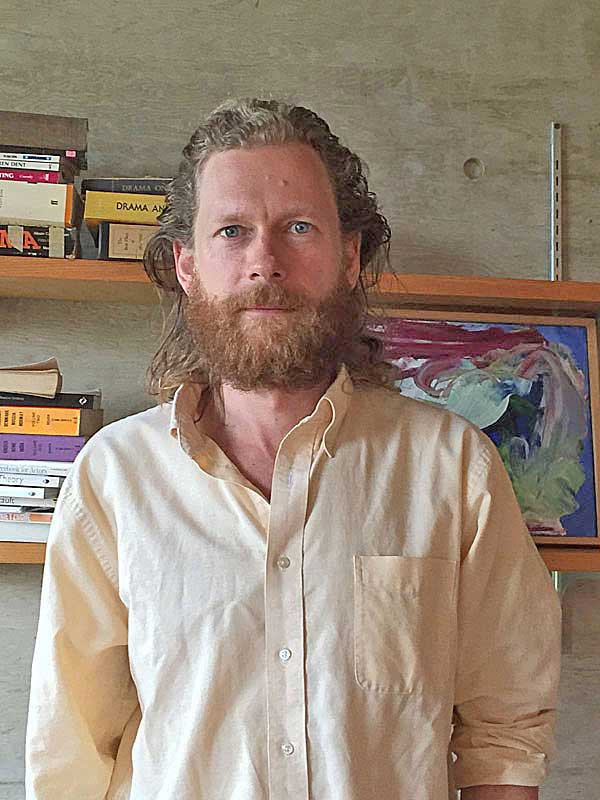 The main speaker was Professor of Performing Arts Isaac Eddy, who spoke about fear using examples from his time as a Blue Man to illustrate the power of vulnerability.
The talk started with an artful depiction of a devil and angel on Eddy’s shoulders, presented with a combination of projected animations and silent acting which he performed.

That was followed by anecdotes about his own sometimes debilitating experiences with stage fright, starting in the fourth grade, when he first experienced a major episode during a school play, and leading up to his nearly 4,000 performances with the Blue Man Group around the world.

Although a fair amount of the presentation was about theater-related experiences, his words had great relevance to his personal life off the stage. “Certainly there was a new self that was formed when I inhabited this character,” Eddy explained, “but the Blue Man also changed me as a person as well, and my hope is that in sharing these changes with you, it could possibly give you a roadmap on how to use your vulnerabilities as strengths this semester.”

Eddy outlined a number of major points and challenges for students to take with them and use over the course of the next semester, the first of which was listening.

“A lot can be learned about the people around you and about yourself when you just shut up for a little bit,” he said. “This is true for learning more about the people in the world around you, and it’s also true for yourself and for your own body.”
He mentioned that a lot of roadblocks we see in our way are purely mental and completely conquerable.

He spoke about his time training as a Blue Man and how he felt so much pressure from the intense process that he began to develop a nerve problem, causing his entire left arm to go numb. Eddy said he feared that he would no longer be physically capable of playing the role and that he would be cut. However, he noticed one night that this nerve problem was only triggered by being afraid and that the problem was entirely emotional.
Once he realized this, he was able to overcome this obstacle and grew as a performer and a man as a result.

“It’s possible to make your fear [into] your superpower if you listen to it properly,” he said.

He next discussed innocence, pointing out that it does not equate to being stupid.
“When I was younger, I was always afraid to speak up when I didn’t understand something, because I feared that I was relinquishing one last bit of social control that I had,” he said. “The Blue Man character allowed me to feel empowered in this state of innocence and showed me how much I could truly learn when I was open to it.”
He explained that neurologists have found that the human brain is most active when it is in awe, and without being unsure, we can never achieve that point. “I want you to challenge yourselves this semester to stay in the business of being confused,” he said.
Continuing to challenge common beliefs, Eddy maintained that contradiction, while often perceived as negative, can in fact be a positive thing.

“I always thought of contradiction as weak and ill planned. But if we are comfortable enough to stay in this liminal space for a moment, there is a strength and a true depth there,” he said.

And finally, Eddy explained how performance itself is transgressive.
“There are bodies in space together, and we don’t know what will happen. This experience can’t be repeated; it’s fleeting ephemera, meant only for the people in the room, here and now. Because it can’t be duplicated, it goes against the main tenet of capitalism, which makes it inherently transgressive and it makes you all vigilantes with me.”

His talk was brief but seemed to resonate with those in the room.