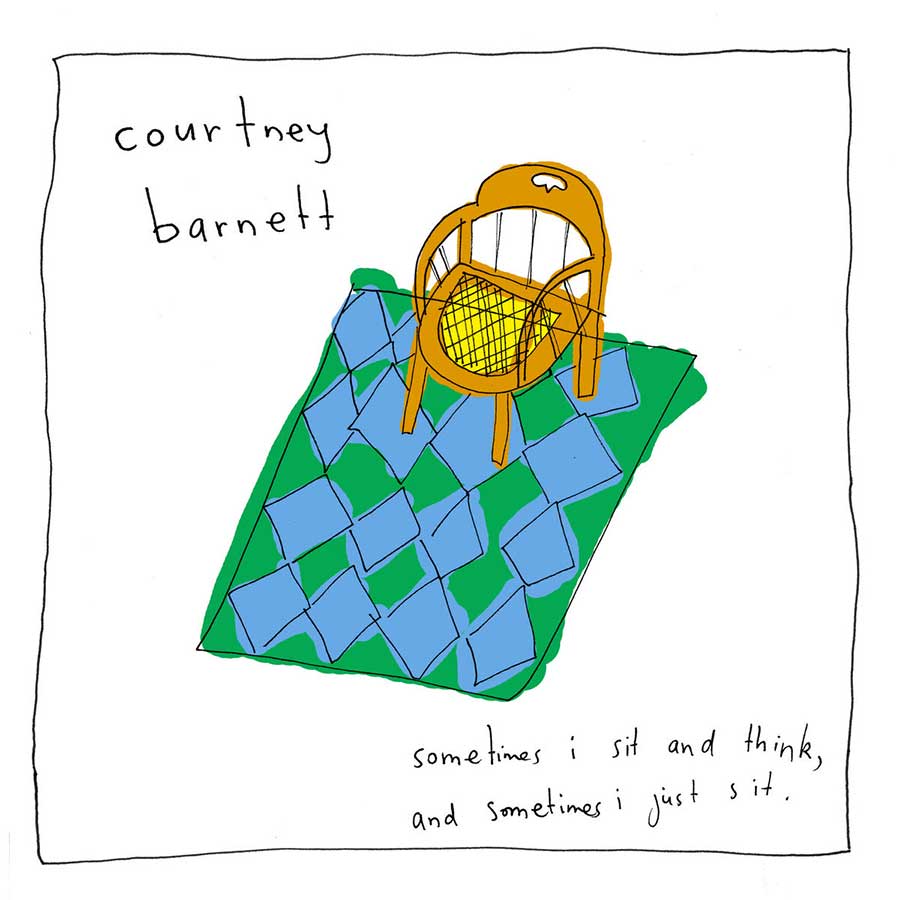 “Sometimes I Sit and Think, and Sometimes I Just Sit” by Courtney Barnett appeared on the indie-alternative scene in 2015 and has become a must-listen for fans of her music. It was received well from critics and fans alike, and was considered one of the top albums of the year. Barnett herself was nominated for Best New Artist at the 2015 Grammys.

The artwork for this album is very personal as Barnett worked with the drawing on the cover, which is a chair sitting on top of a blue and green blanket. It’s not great artwork, as I could jokingly critique her inability to color in between lines, something that my preschool teacher was strict on me for, but the amateurism is what draws me to this album cover.

I am a fan of the sound of the album. Most of the hits like “Pedestrian At Best” and “Nobody Really Cares If You Don’t Go To The Party” combine the elements of punk and grunge music to create this high tempo rhythm in these songs with a rough, but melodic guitar sound. At times, there is a somber sound with a handful of songs, such as “Small Poppies” and “Depreston.” I liked this change of pace while listening, especially with “Depreston” as the sound comes from an acoustic guitar as Barnett is softly singing the lyrics.

The biggest highlight is the lyrics of each song. This is what draws fans of her into her music. Through her songwriting, she comments on her everyday life and her struggles as a normal human being. She does a great job being relatable, but in a very quirky way. One of her stand-out lyrics of the album comes out in the song “Pedestrian At Best” where she sings, “Put me on a pedestal and I’ll only disappoint you/Tell me I’m exceptional, I promise to exploit you/Give me all your money, and I’ll make some origami, honey/I think you’re a joke, but I don’t find you very funny.”
The themes of her depression, love life, the environment, and more can be related to the title, the idea of her sitting and thinking. Her mind wanders around from idea to experience in this album, making it fun to listen to.

Another fun song to listen to is “Aqua Profonda!” where she talks about being at the local pool one day and is trying to impress someone she likes, and by doing this, she tries to hold her breath as long as she can, and when she can’t hold it for much longer, she comes to the surface only to realize that the person had left. It’s a funny story played along with this up-tempo sound coming from the band.
My favorite song was “Dead Fox.” It’s got a really catchy guitar riff going along with a balanced rhythm section. Barnett opens with the lyrics “Jen insists that we buy organic vegetables/And I must admit that I was a little skeptical at first/A little pesticide can’t hurt/Never having too much money, I get the cheap stuff at the supermarket.” Definitely relatable for me as I am currently living through the peak of my college life.

She then sings later on in the song “More people die on the road than they do in the ocean/Maybe we should mull over culling cars instead of sharks/Or just lock them up in parks where we can go and view them.” This was Barnett’s best lyrics, as it mentions that humans are a bigger harm to the planet than sharks are who are arguably one of the scariest animals on the planet. Throw in the fact that sharks population are going down as well, and it made me really go into deep thought about how reckless humans can be.

One thing that might turn away listeners is Barnett’s singing voice. She doesn’t have a great singing voice, but I didn’t really mind it. It’s comparable to other vocally imperfect musicians that have gone on to have very successful careers like Bob Dylan and Tom Waits.
If you’re trying to get into Barnett’s music, this is the album I would start with. It is a great work of art and will be listened to for decades to come. She has also released a EP called “The Double EP: A Sea of Split Peas” and a full-length album called “Tell Me How You Really Feel.”