An a-maiz-ing performance with an Afro-Carribean twist 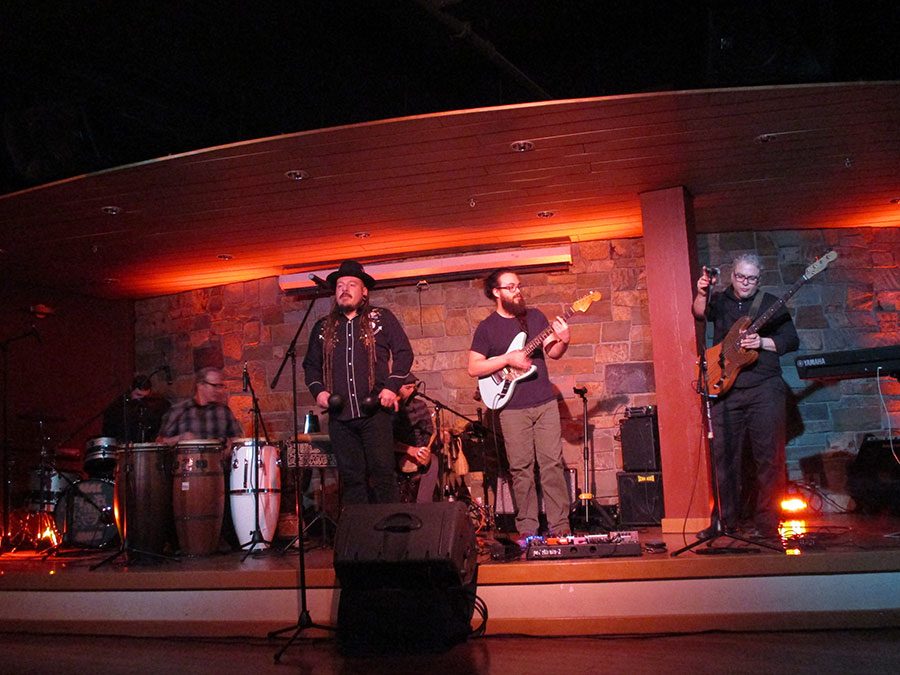 On March 26, Burlington-based Afro-Latino band Mal Maiz rocked NVU- Johnson’s Stearns Performance Space. I attended with a few of my friends who were also intrigued by the Creative Audience posters posted around campus. It looked like a funky, alternative jazz show of sorts, but what it ended up being was far better and made for a really fun evening.

The group is headed by lead vocalist and miscellaneous percussion player Maiz Vargas Sandoval, who shares his Costa Rican roots through the music. A lot of his banter between sets was in Spanish, which I don’t understand, but he translated, aware of his woefully (mostly) non-cultured audience. He had a very artistic appearance with dreads that hung down his back, bright eyes, and a voice that was clear and powerful enough to be heard and understood over the myriad of percussion, a keyboard, an electric bass and guitar, all of which filled the very small room.

I was worried that one sound or another might get lost in such a space, with a capacity probably topping out at 200. But I was pleasantly surprised, and because of that, the evening was probably the high point of my week.

The group had a lively and dynamic sound and incredible cohesion, making for seamless transitions between complex rhythms and varying tempos. I was simply blown away by the accuracy and the talent on stage. I’ve never seen a live performance of that genre before, but it really is a full and amazing experience.

Although I was unable to understand 95 percent of the lyrics based on my insistence on taking three years of French in high school, I still enjoyed the descriptive snippets that Sandoval gave between sets, which gave me something to think about. I looked them up later and found that many of their songs are inspired by folktales from Sandoval’s childhood, his grandparents and parts of his culture that he misses.
Some of this, he explained in performance, was the reason he was so thankful to be there that night to share the music with us.

They played a mix of some older songs and some newer songs including “Country,” “Hüru Hurü,” and “Barrio,” which they also played live at VPR’s Stetson Studio One in January as part of Live From The Fort’s New Voices Project, which will showcase world music traditions that are present in and around Burlington.

There were also some killer jazzy licks on keyboard performed by Mike Hartigan as well, which really added a modern element and fresh twist to the sound. I always appreciate a good keyboard solo, but he knocked it out of the park.

Graham Lambert on electric guitar also shone with his impeccable accuracy and skill through the performance. He had a couple of solos through the night that were just wild and skillful, and I think his personality on stage during them really made them shine. You can’t play something that intense and not get really into it, and I was so happy to see that.

I was also a big fan of all the people who came out to dance from the NVU- Johnson community. It’s a similar group every show, but they always seem to pull new people in, which is really what going to a show is all about; bringing people together. At some point, a couple started doing some goofy dances, such as the classic “grocery shopping,” and a couple band members saw and were amused. That was priceless.
The only thing that disappointed me was the lack of a merch table up front or some means of swag, which I (and my group mates) would have happily bought.