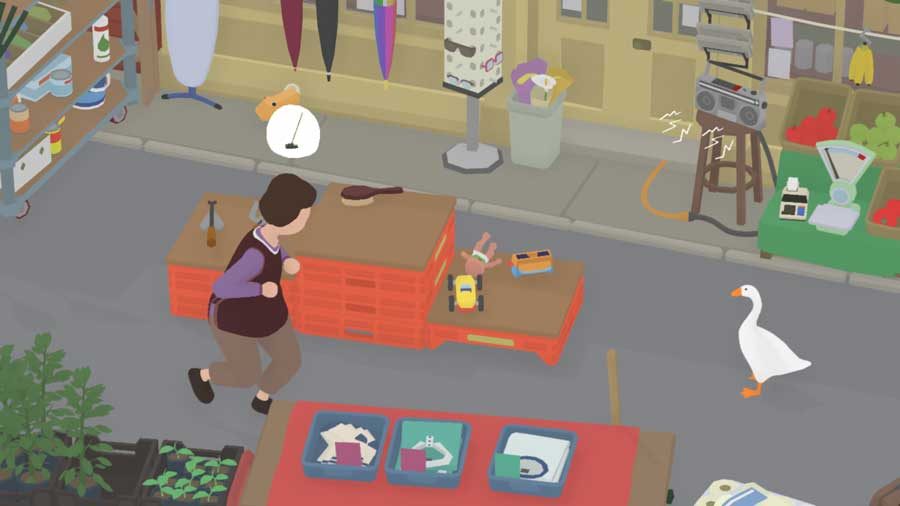 Cue me-as-goose acting like a defiant, feathered jerkbag while the exasperated shopkeeper searches for her broom to remove me from her shopfront. Joke’s on you, lady, because I already dropped half of it into the lake.

I wasted about 10 hours pretending to be a goose, and I enjoyed every minute of it.
I’m not normally a big ‘gamer,’ but after seeing the memes, I spent $15 on House House’s “Untitled Goose Game” for my laptop. The visual style of the game is cartoony and unpatterned, favoring a simple style of animation.

The idea is simple. You are a goose, and you want to be as much of a bother to the townspeople as possible. You can honk, flap your wings, and grab things in your beak. Don’t let them catch you, though, because you’ll drop what you’re holding and have to steal it back. The townspeople make general noises, but they never speak. Their bodily gestures are always extreme, so it’s always fun to watch when they notice something is wrong.

The main game is split into areas to unlock by fulfilling objectives like “lock the groundskeeper out of the garden” and “rake in the lake.” Often, the written objective won’t explain exactly what it means, leaving the player a fun (and often difficult) puzzle to solve. In some cases, the townspeople aren’t frightened of the goose and if necessary will chase the player across their area in order to retrieve stolen items.

Stealth is also a large part of the gameplay. The goose needs to hide, dodge and weave to avoid being detected to retrieve a couple of important items. I enjoyed employing a certain maneuver I’ve nicknamed the “snatch and run,” in order to solve some particularly difficult objectives.

I think the music is the true ‘cherry on top’ of this ridiculous (and yet lovely) game. In response to a chase sequence or a certain stealth mission, the game will play different versions of the twelfth prelude in Claude Debussy’s Préludes, called “Minstrels.” When the trailer for the game dropped in 2017, the reaction to the music was so overwhelmingly positive that composer Dan Golding recorded two versions for use in “Untitled Goose Game,” a quiet one for stealth and regular play, and a loud one for chases.

I have to say, nothing gets my heart rate faster than trying to run across a certain area carrying a necessary item and a townsperson noticing me. The music swells, and I’m forced to run as fast as my goosey legs will carry me, outside of the radius of the NPC (Non-player character). I have been known to yell expletives loudly when I accidentally hit a wrong key and drop something instead of honk or vice versa.

Given that a good bit of the game relies on sneaking and then running very fast, the controls can be very frustrating. As I said, I’m not a ‘big gamer,’ so I’m not used to lightning-fast controls. Sometimes the running animation will stop, and the goose will walk, even though I’m pressing the right controls. The goose is supposed to drop things when near the townspeople, but I’ve completed some objectives because of a momentary lapse in that mechanic, which I theorize is a small bug.

If there are several things that may trigger a townsperson’s “stress response,” wherein they go looking for the goose and/or return their possessions to the correct places, sometimes they will just walk in circles aimlessly, while their stress speech bubble indicating what they are trying to go after changes constantly. This is how I imagine I look when I have five different homework assignments to do and only a couple hours to get them done.

The controls can be changed to fit a handheld controller, but I chose to reset the keyboard controls to WASD for movement, Space Bar to honk, and R to grab. Shift meant I flapped my wings. That was the easiest way for me to control the goose, because the handheld controller idea did NOT work for me.
Overall, I think this game is perfect for those who love the whimsical idea of being an asshole goose with no consequences. Speedruns of the game take about an hour, but I spent about 10 on the main quests. Once players complete the original set, the game restarts with a whole other list, which can take much, much longer. I think this was worth every dollar I spent on it.

Kotaku’s review sums this game up beautifully: “The real magic of the game lies in brief, endlessly funny interactions. There’s an insidious joy in drawing out increasingly infuriated reactions from the small town’s people—all of whom are, in their own way, kinda douchey. They had it coming, I think. Or maybe I’ve come to so thoroughly inhabit the goose’s headspace that now that I have an implicit bias. I appreciate that the game’s humorous sensibility rarely tips over the ledge into outright absurdity, preferring instead to take an understated route where the punchline is almost always “Wow, that goose is kind of a dick.” You, the player—the artist of avian assholery—paint within those lines.”

And avian assholery it is. Find Untitled Goose Game on Epic Games– for Windows, Mac, and Nintendo Switch.