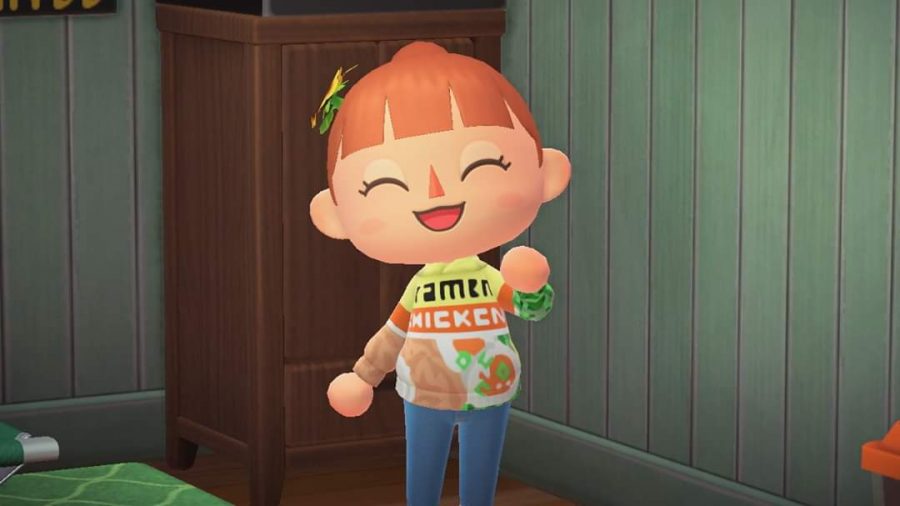 The game includes a clothing editor, which allows players to recreate their favorite clothing in-game.

Released on March 20, 2020 for the Nintendo Switch, “Animal Crossing: New Horizons,” has become more than just a simple game for players of the series seeking nostalgia. With the current state of the world, “New Horizons” has provided many, including myself, with a much-needed getaway from the stress and anxiety of real life. Bringing the highly missed outdoor activities and social interaction right to our screens, “New Horizons” is a meaningful way to pass the time we spend indoors.

The game starts out when the player (a human) embarks on a flight after signing up for the Nook Inc. Deserted Island Getaway Package, a vacation deal set up by the series’ well-known raccoon/tanuki business tycoon, Tom Nook. With his sons Timmy and Tommy, Tom Nook gives the player the task of making the deserted island the town of their dreams.

“New Horizons” remains the same day-to-day life simulator the “Animal Crossing” series has always been. Players can choose to spend days doing whatever they wish, whether it be planting flowers, chatting with locals, fishing for exotic (or not so exotic) fish or catching bugs.

“Animal Crossing: New Horizons” brings two new mechanics to the series that sets the game apart from its predecessors: crafting and terraforming. In previous games in the “Animal Crossing” series, players were required to buy all their tools and furniture.

“New Horizons” allows players to build their own tools and furniture through collecting and buying recipes. While the option to buy pre-made tools and furniture still exists, crafting adds a new element to the game that freshens up the formula. Terraforming, the second new mechanic, allows players to tear down mountains, create and remove bodies of water, and build paths to turn the island into their personal paradise.

Although it is a small addition to the game, there is one other new mechanic that stands out: Nook Miles. Nook Miles are premium points that you earn through completing specific tasks, and players can use them to purchase a variety of goods that improve their island and quality of life.

In the past, “Animal Crossing” games included very little incentive for leisurely activities. While that lazy-day feeling was nice, the addition of Nook Miles has me constantly checking to see what I can do for the day, and trying to earn points to afford a round-trip ticket to the dreaded-but-profitable “Tarantula Island.”

No other Animal Crossing game’s soundtrack can rival that of the original “Animal Crossing” for the Nintendo GameCube, but “New Horizons” comes close with its relaxing melodies that play as the day progresses. While there is no singular individual to credit for the game’s soundtrack, the music still holds a whimsical charm that can whisk the unsuspecting individual into their island adventure for hours on end.

However, there is so much more to the music of the game than meets the ears. While the calming instrumentals are quite the treat, the music of K.K. Slider, a dog musician based on one of the game’s composers, Kazumi Totaka, provides players with an extensive discography of various tunes both old and new.

The graphics in “New Horizons” are breathtaking and transport players into a cartoon-like world full of wonder. While I do find myself missing the polygonal animals and pointy hats of the past, “New Horizons” brings a new, modern-day charm to the table that continuously captivates me the more that I play.

Customization has evolved greatly throughout the series, and its evolution can clearly be seen in “New Horizons.” The most notable change is that the appearance of the player’s avatar is no longer locked behind a series of questions, and players do not need to choose whether they are male or female.

At the start of the game, players are asked to “choose their style” in place of gender and can pick their physical attributes to create a character that best represents themselves. This appearance can be changed at any point in the game. Additionally, with a variety of brand-new clothing items, players are given the opportunity to choose whatever outfit they want to wear.

I had never expected this game to become more than just a nostalgic trip. While it still conjures up feelings of nostalgia, I find that this game is so much more special during this hectic time. The hours that I’ve played so far have filled me with so much joy, and I always look forward to the time of day when I can turn on my Switch and be whisked away to my virtual home away from home.

If you are a long-time fan who has been on the fence about buying this title, or are a newcomer to the series who has had their interest piqued by this review, I highly recommend giving “Animal Crossing: New Horizons” a chance. In these difficult times, we all need something to make us smile, and “New Horizons” could not be a better fit for that task.