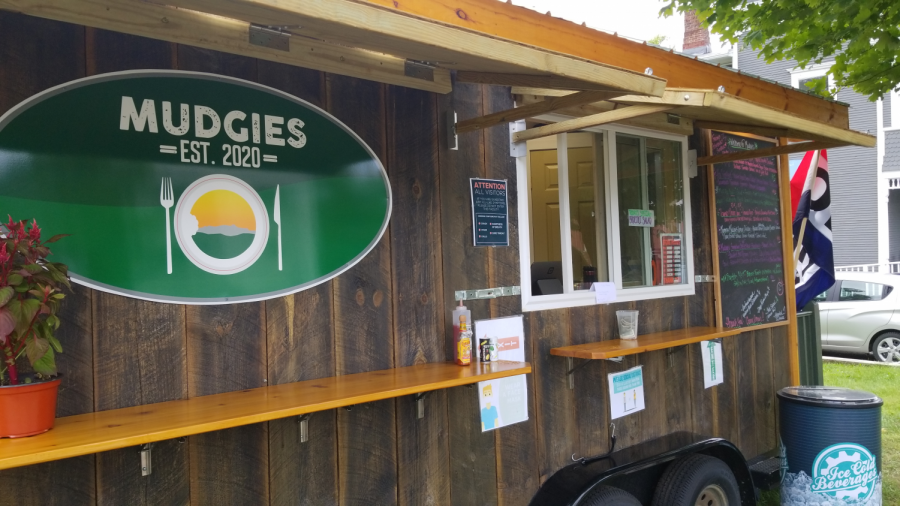 Mudgies' front on the village green

Sometimes, a full belly is just the thing you need from a meal. If that’s the case, Mudgie’s food truck is an exceptional choice.
Mudgie’s, named for its owner Cody Mudgett, is a Mediterranean food truck in Johnson that was established this year. It’s situated on the village green, and its menu hosts several wraps and sandwiches that change each weekend.
Johnson’s neighborhood online discussion board on Front Porch Forum lit up with commentary when the food truck was first announced. Some locals were opposed to its location, arguing that its presence takes up space on the green and mars the view, whereas others welcomed the new business as an addition to Johnson’s small local options.
After my experiences, I have to say the fuss was entirely unwarranted. The truck blends in perfectly well with the rest of Main Street and leaves plenty of space on the village green for people to sit and enjoy themselves. Mudgie’s is a fine establishment serving pleasant and affordable lunches to college students and townsfolk alike.
Mudgie’s truck is a rustic kind of cutesy – the exterior is almost entirely decorated and built with wood. Their menu is on a chalkboard, and there are a respectable number of options for a food truck. Because the options change every week, there’s a reason to come back next weekend if nothing strikes your fancy.
When I visited, I ordered the VegHead in a minor panic since it was the first vegetarian item I saw, and the person running the stall had already asked me what I wanted – social anxiety be damned.
The wait was brief, maybe five minutes before my sandwich was handed to me in a foil wrap. I was offered compostable utensils, which I declined since it was a sandwich and I was going back to my dorm anyway.
When I opened up the foil on my desk, the utensils made much more sense. The wrap was absolutely packed with greens – cucumbers, peppers, and spinach were practically leaping from the naan bread. The mushrooms and tomatoes added a welcome splash of color to the vegetable ensemble.
I very carefully folded the naan back over itself, losing a chickpea or two in the process. I kept the sandwich wrapped in the foil for the rest of my meal, rolling down the edges as I progressed.
The naan bread was soft and satisfying to tear through, especially when rewarded with the crunch of cucumbers and peppers after the fact. The soft leaves of spinach alongside the mushrooms added to the tender chewiness of the bread. The tomatoes added a splash of juiciness and helped counteract the drier insides of the chickpeas.
Overall, the texture of the VegHead was stellar, and my favorite part of the experience. It was a wonderful combination of soft leaves, squishy bread, and crunchy veggies.
In terms of taste, I could have used a bit more. The tomatoes and peppers were the only flavors I could really notice while I was eating. I would describe the overall palate as soft – welcoming and enjoyable, but not something that would stick out, and I was left wondering how much lemon vinaigrette was actually added.
That said, the food truck did have a small collection of sauces and spices on a shelf for customers to use. Pepper, salt, ketchup, and hot sauce was their limited selection. After a few bites of the sandwich as it came, I remembered seeing those and grabbed the hot sauce out of my minifridge to try it out.

The added zest was exactly what the VegHead needed. What I had wanted from the lemon vinaigrette wasn’t entirely replaced, but the hot sauce added a lot of complexity to the previously simple flavor profile. The gentle taste of the vegetables was still noticeable – the juiciness of the tomato and the cool crunch of the cucumber were present at the start of every bite, then gave way to a rush of warmth that the hot sauce provided.
My largest complaint about Mudgie’s would be the hours – only being open Friday through Sunday 11:30-4:30 doesn’t provide a lot of convenient opportunities to swing by and grab a sandwich. The prices are fair for what you get, and the changing menu makes sure you won’t run out of options.
I think I’d like to visit Mudgie’s again. The VegHead was a great base with a satisfying texture and a flavor that was complemented well by the condiments available.
My experience, much like my sandwich, was comfortable and provided a start that I could continue to explore.