“The Boys”: jarring and delightful 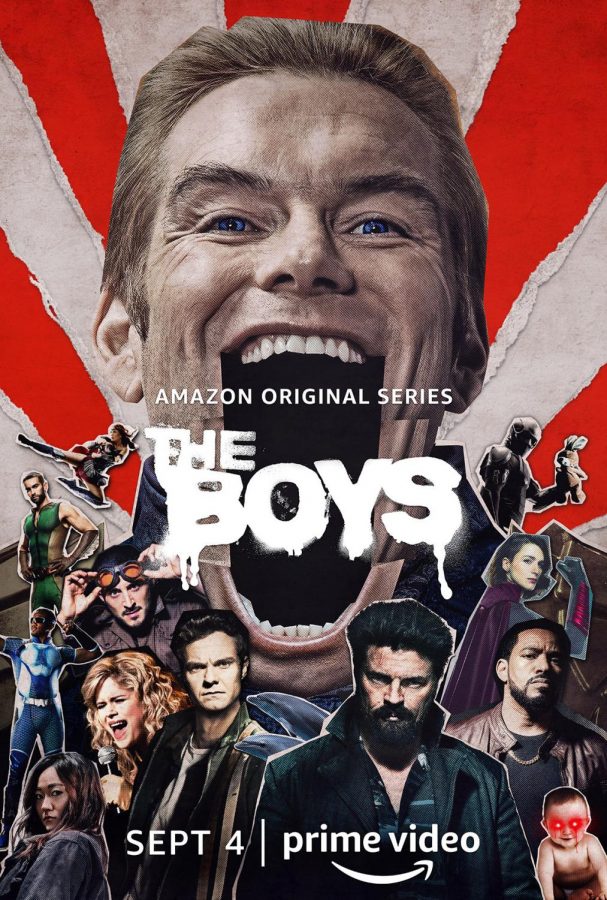 Promo poster for "The Boys"

Recently, superheroes have become a staple in the media world, with remakes, sequels, and crossovers dominating the movie and television landscape. While occasionally entertaining, many are simply rehashed plots and used up arcs from comics or earlier movies. Few of them manage to bring any sort of substance or novelty to the genre. Enter the new Amazon original series, “The Boys.”
I admit to being skeptical as I sat down to watch the first episode. My previous experiences with the genre have often left me wanting or bored. Within the first 10 minutes, however, I had seen a person explode into a cloud of gory jelly and witnessed actor Simon Pegg being forced to imitate an American accent, something that I found jarring and delightful all at the same time.
The world portrayed by the show is a clever one. The premise is centred around the idea that superheroes are all subject to a overseeing corporation who markets them and their exploits–engineering sponsorship deals and branding schemes for their next movie deal rather than being the paragons of justice that they are typically wont to be.
Then enters the protagonist, a young, bland gentleman by the name of Hughie, played by Jack Quaid, who faces a tragedy in the early scenes of the pilot episode.
Contrary to most hero films in which the protagonist is a superhuman themselves, “The Boys” takes its star in a different direction, making him a relatively powerless mortal in a world of mythic titans with unreal levels of power. His main conflict centers around the idea of vengeance: how does a mortal without powers get justice for the wrongs he has suffered, especially when those wrongs come from the same heroes who purport to be arbiters of “good”?
The premise of the show is a good one, providing an interesting and novel approach to a already-saturated genre.
Enjoyably, the show also tackles many relevant social concepts of today. While ploughing through the eight-episode first season over a single weekend, I watched as the writers skewered such subjects as male privilege, corporatization, hero tropes and even the current government and its bent towards the fundamentalism of conservative Christianity. Heading this absurdist take on our beloved heroes and the America we know are such figures as Homelander, played by Antony Starr, a Superman clone with a dark twist and a hidden kink that made me squirm in my seat. Joining him is a Wonder Woman-esque Queen Maeve, played by Dominique McElligott. Last in the main lineup is a satirical take on Aquaman who everyone claims has sex with dolphins. These are joined by others who are often cunningly parodied versions of existing superheroes.
In terms of cinema quality, the show was gorgeous and dark, a gritty lens into an even grittier world. The soundtrack mirrored this aesthetic with a grungy rock theme and a few modern pop hits that fell perfectly into place in the fake trailers and previews of the superhero movies that they inhabited. With multiple writers and directors for each episode, I still found that the flow was seamless, and the story arcs followed through rather than becoming a jumble of loose ends to be ignored or butchered by the succession of writers in later episodes.
I would be remiss, however, if I didn’t mention my disappointment with several aspects of the show. The protagonist is male, along with most of his crew, which are all also men, hence the name of the series. The few women present fall to the wayside too often and though they occupy places of power, their amount of screen time is less than optimal. In every case, each of them is in a relationship as the token partner, either to the protagonist himself or one of the other lead characters in the story. With each episode, I found myself thinking that a simple gender swap of the main character would have given the show more meaning than the tired trope of a boy’s club hell bent on revenge.
I was also disappointed to find that the queer community was represented only once in a small side plot that added little value to the narrative, which was a shame. Again, I kept fantasizing about how much better the show could have been if they had made the protagonist some flavor of LGBTQ+. The added depth and inclusivity seemed like a missed opportunity and would have placed “The Boys” in the company of several other films and shows in recent history that have chosen to leave the whitewashed halls of male heroes behind in favor of a more diverse cast.
All of this notwithstanding, I enjoyed the many laughs and moments of reflection at the cutting satire of the hero narrative and dark world of “The Boys.” Their world is much like our own and the political and social relevance of much of the story arc kept me interested enough to finish the first season despite its lack of compelling female characters and casting diversity. In terms of an action piece, it’s a gem, the absurdist, over-the-top violence and gore a delightful spectacle for those who are interested in such things. The narrative was sound and kept me engaged, and there were only a few moments in which I rolled my eyes at the script or the dialogue of any given scene. Given the entertainment value of the series, I will likely pick up the second season when it releases this September. I am curious to see what new exploits “The Boys” will get up to next.