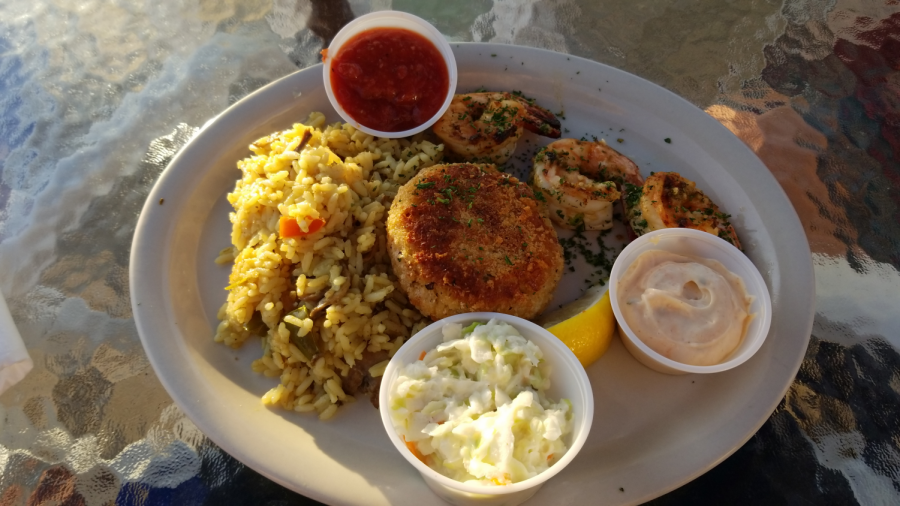 Baked Crab Cake and Jumbo Shrimp at The Shanty on the Shore.

Way back in 2019, on the last day of March, I decided that dinner would be the last time I ate meat. For about a year and a half, I didn’t eat meat. I found the experience to be rewarding in the sense that I had accomplished a lifestyle change for the better.
After the first month passed, it became matter of fact, and I hardly noticed the absence of dead animals from my meals. However, in recent months, I became existentially aware of how much I missed seafood – before I stopped eating meat, it was one of my favorite categories of food.
So, for our anniversary dinner on Sep. 12, my girlfriend, Nathalie, despite not liking seafood herself, agreed to have our date at Shanty on the Shore – my favorite seafood restaurant from before I went vegetarian. Their menu ranges from seafood classics like Fish and Chips to more unique options like the Maple Ginger Salmon.
The Shanty is on the waterfront in Burlington, and the view is beautiful. Knowing this, I reserved an outside table so we could watch the sunset over Lake Champlain while we ate. The restaurant is quaint and is made up of browns, whites and blues, calling to mind a sailing ship on the water.
We were seated quickly, and our server arrived shortly thereafter. By the time we had finished eating, the restaurant had become much busier, so it took a little bit of time to get our check. Aside from that minor nitpick, which our waiter apologized for unprompted, the service was kind and timely.
I asked for a water, and my girlfriend ordered the Lakeside Lemonade. I was more than a little upset that I’m still not 21, because the thought of the Shoreside Mary and the pictures I’d seen of it online were enticing beyond reason.
Nathalie ordered the Chicken Parmigiana, one of the few non-seafood items on the menu. She said the breading was flavorful and crunchy, and the sauce was tasty and had just the right amount of acidity. She did notice a bit of a fish taste in the chicken but could have been the marinara.
I ordered the Baked Crab Cake and Jumbo Shrimp – two of my favorite seafood items before I went vegetarian, Shanty on the Shore offers them together as a single meal. It came with rice and coleslaw, along with a Cajun remoulade. I also asked for cocktail sauce.
I started with the rice, which seemed to be Spanish inspired with a creamy tang. It had peppers and mushrooms, which both added a bit of firmness to the otherwise soft and fluffy rice. The coleslaw was well constructed, crunchy and with a nice blend of sweet and sour.
After I’d had a bit of the vegetarian portion of my plate, I started to feel a bit nervous. I was going to have to eat the shellfish portion eventually, and I was worried that almost 18 months of not having fish was giving me unrealistic expectations.
Biting into my first shrimp, I felt a rush of ecstasy at the return of my favorite food to my palate. The meat was tight and bouncy, and it tasted smooth and savory. I had taken a bite without any sauces first, and I’m glad I did. The seasoning on the shrimp added an enjoyable, fresh herbal twist.
The creamy and mellow flavor of the remoulade gave some depth to the chewiness of the shrimp and tasted of homey comfort. The cocktail sauce was chilly and zesty, and I was glad I requested it. While the remoulade absolutely belonged on the plate, I couldn’t imagine having my first shrimp in so long without the classic combo.
The crab cake’s breading was crunchy, and it matched the flaky and shredded texture of the crab wonderfully. On its own, the crab was a nice mix of sweet and salty, and the crust had been seasoned well.
With a bit of the remoulade, the creaminess added another interesting texture to an already dynamic bite, as well as a pop to the previously gentle flavor of the cake. I was pleasantly surprised to find the crab cake meshed with the cocktail sauce as well – the cool sting and thickness of the sauce went much better with the light and flaky nature of the crab cake than I thought it might.
After having such a blissful experience being reunited with seafood, I talked with my girlfriend about what my eating habits would look like moving forward. While I’m still not certain how often I’ll be eating fish, especially since I’m living on campus, I know I want to add it back into my diet.
The price came out to be a little under $55 without the tip, but the food and service were certainly worth it. Returning to Shanty on the Shore was a great way to kick off a reintroduction of seafood into my diet. I’ve already convinced Nathalie to go there again for my birthday – and I’ll be ordering that Shoreside Mary without a doubt.