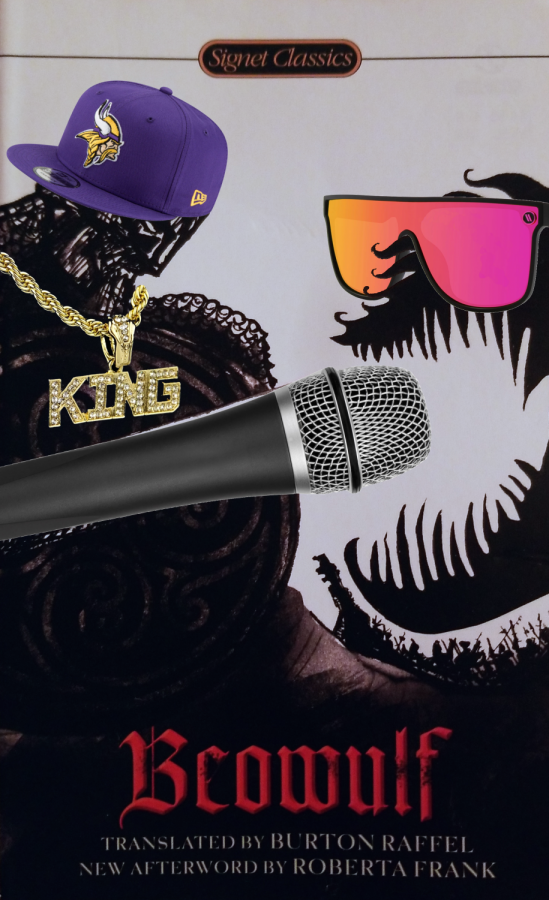 Beowulf is an epic tale of heroism and bravery, where men who fight with honor are bestowed great wealth and fame. It is a story about slaying vicious beasts in the name of God and never giving up no matter the trial at hand.
It is also story which features Viking rap battles, and if that’s not a selling point, then this review isn’t for you.
The art of storytelling has come a long way since “Beowulf” was written, although its date of initial conception is lost to history. The British Library puts its estimate in the early eleventh century, giving society roughly 1,000 years to refine the craft of poetry and narrative.
However, there are many aspects of the ancient epic that might still appeal to the modern reader. The battles are dramatic and over-the-top, as are the detailed descriptions of the mountains of treasures and gifts that are being traded between the characters constantly.
There’s enough fantasy spectacle to rival a Michael Bay film – except instead of explosions and giant robots, there are sword fights with evil monsters, bards dramatizing historical wars and flyting, or, more simply, Viking rap battles, complete with diss tracks, call outs and death threats.
The titular character Beowulf is a pretty unstoppable machine. He’s like a condensed can of muscles and bravery, and the story makes sure you understand that. When Beowulf is tasked with killing a monster whose skin is too hard to be cut with a sword, he just rips its arm off with his bare hands, then calls it a day.
And that’s only one instance of the several times throughout the book where Beowulf is referenced as being so strong that using his fists is more advantageous than swinging a weapon, including one where he shatters a sword because he hits his foe too hard with it.
The only thing more badass than that would be some sort of competition of verbiage and poetic form to boast about one’s own qualities over the flaws of another, as performed by ancient Norse warriors – something like a Viking rap battle. Of which there are several in “Beowulf.”
Main man Beowulf, son of Edgetho, is also an adept swimmer, and he seemingly can’t drown judging by the story he recounts of fighting sea monsters underwater, a feat that lasted the whole night. He must have worked up a pretty hefty lung capacity with all the flyting he does.
Aside from the spectacle of slaughtering sea monsters while being held under skull-crushing water pressure, there are also some truly beautiful poetics throughout the piece. A number of them that pertain to death stand out as especially poignant – “death / and Grendel’s teeth came together, / snapping life shut,” and “he would sleep in the fire soon, his soul / left his flesh, flew to glory,” being two such instances.
Plenty of other lines in the piece were just as striking. Amidst the fighting and flyting – which, as a reminder, means a Viking rap battle, there are some lines of poetry that wouldn’t be surprising to find in a modern work. The imagery and metaphors are remarkably fresh for such an old piece.
Of course, the conventions of narrative and storytelling have been subject to substantial improvement over the many centuries since “Beowulf” was written. There aren’t any real moral quandaries that Beowulf has to punch his way through – he’s the good guy, and all of the monsters he’s beating up deserve it.
There’s also a lot of God talk, which is due largely to the values at the time. This adds a lot to the black and white storytelling, giving that the antagonists in “Beowulf” are regularly described as enemies of God, and our leading character consistently attributes his ability to vanquish these supernatural fiends to the Holy strength given to him by the Lord.
However, when there is a gripping story present, it often comes accompanied with something few other pieces of media have ever done justice to: flyting. Because, as aforementioned, there are Viking rap battles in Beowulf.
An area where the story falls flat is its depth of character – a lot of the people in the tale have only one or two character traits, including Beowulf himself, who often comes across as a quaking manifestation of aggressive masculinity.
That said, who needs character depth when you have rap battles as the ultimate means of entertainment? Because those happen in Beowulf with a much higher frequency than you might expect of a poem that’s older than the modern English language. Apparently, humans were spitting bars at each other before we knew what a mixtape was, and I think that’s pretty cool.
If you take one thing away from this review, let it be that Beowulf is actually a pretty good read despite its age. There’s plenty of spectacle fighting and depictions of hordes of treasures, and the poetics can be genuinely gripping and, at times, moving.
Oh, and it also has Viking rap battles.