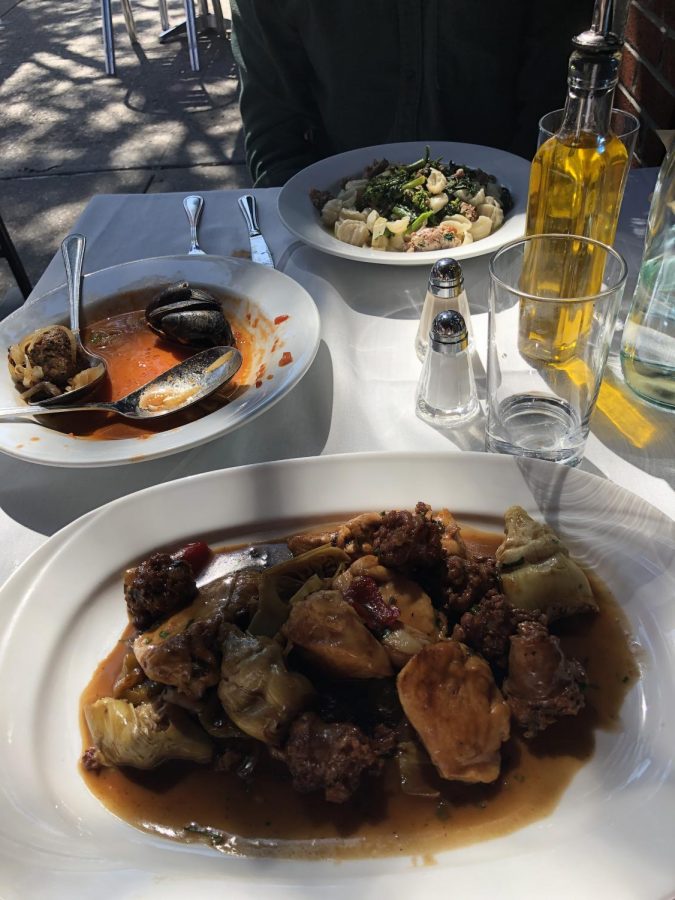 It was my 26th birthday, and all I could think about was what I was I going to eat that day. Luckily for me, my father knew exactly where to go, so we headed to New York City.
New York has a wonderful mixture of cultures that make for great food no matter what part you’re in. For our lunch on my birthday, we parked the car in the Bronx and walked a block over to Arthur Avenue.
For those who do not know Arthur Avenue, it’s a strip in New York heavily populated by people of Italian descent. It’s home to many restaurants, bakeries and shops — all very Italian.
When we got to Arthur Ave., there was a protest going on. People were wanting to take down the Christopher Columbus statue. The area was teeming with NYC cops, shopkeepers and other Italian locals.
With all this excitement, my head was on a swivel and from what I could see, the many restaurant and store owners were not happy. They were screaming and shouting at the many students from Fordham University who were there to protest the statue’s existence.
After observing the tail end of the protest and walking around a bit, the excitement of the Bronx had me building up an appetite, so off to Enzo’s Italian Restaurant we went. Although we could not sit inside, I could see the authentic Italian decor that my father said had not changed in years.
After waiting a few minutes, my father and I got seated at a small table outside the restaurant where we could hear Italian music and conversation in the air, all making for a great ambiance.
To start, my father and I ordered the Mussels Marinara that consisted of Prince Edward Island mussels in a marinara sauce, and their Signature Fried Meatballs made from Beef and Veal and topped with sautéed onions and hot peppers. I also ordered some house Chianti wine to complement the dish.
Our first course came out and my mouth had already began to water. As far as how the dishes were plated, it was nothing super fancy; just how Italian food should look.
First, I dumped a few muscles onto my side plate and saved the meatballs for later. To complement the mussels, I poured some of the fresh juices from the bowl on top to get all the flavors out of this dish.
At first bite, I was certainly in awe. The mussels weren’t overcooked and chewy, but tender and juicy. The sauce was very traditional, not over herbed or spiced, and tasted very fresh. I find sometimes when a dish like this is ill-prepared, it comes out salty and displeases the taste buds, but not in this case.
Next, we had the fried meatballs, and they were like nothing I have ever tasted before. First off, the texture of the meatball was slightly crispy on the outside, but it was soft and moist on the inside.
The onions and peppers on top were also delightful. They not only helped add taste, but visually they looked superb. They were piled on top of the meatballs making for the perfect bite every time.
For our second course, we ordered chicken rustico and the broccoli rabe and sausage over orecchiette pasta. The chicken rustico consisted of sautéed boneless chicken, sausage, cherry peppers, and artichoke hearts in a balsamic sauce.
This meal was to die for. The chicken was cooked just right. It was juicy and flavorful and nicely complimented in the light balsamic sauce. The sauce also had a light splash of olive oil that added to both the taste and visuals.
I find great satisfaction in watching the balsamic split slowly from the oil on the plate. The cherry tomatoes added a nice touch as well. Taste-wise, they were very mild and sweet, as well as aromatic.
The green and red peppers visually completed the dish along with the artichoke hearts. These are both vegetables that add great flavor without overpowering the meal with too much spice or sweetness.
Lastly, the best part of the dish — the sausage. The sausage was the most tasteful thing in the entire dish, calling to mind a variety of delicious herbs and spices. If I had to guess, I would say the two main spices were fennel and garlic from what I could taste and smell.
The second dish, broccoli rabe and sausage, was delightful. It consisted of nothing more than sausage and broccoli rabe that had been sautéed in garlic and oil then laid over orecchiette pasta.
Typically, I like my broccoli rabe to be bitter, but it wasn’t in this preparation. That aside, the dish was still very tasteful and gave off this wonderful scent of fresh garlic. Visually, the green vegetable complimented the bed of pasta underneath.
The perfect balance of leafiness and crunchy stem to the broccoli rabe was also a pleasant surprise. It blended well with the al dente orecchiette pasta that was topped with a sprinkle of fresh parmesan cheese.
Overall, Enzo’s was a pleasant surprise. The location, decor and food made this the spot to be on a bright and sunny day in the Bronx. I plan on returning at least one more time before it gets too cold, and I highly recommend it to anyone who plans on traveling to the New York City area.