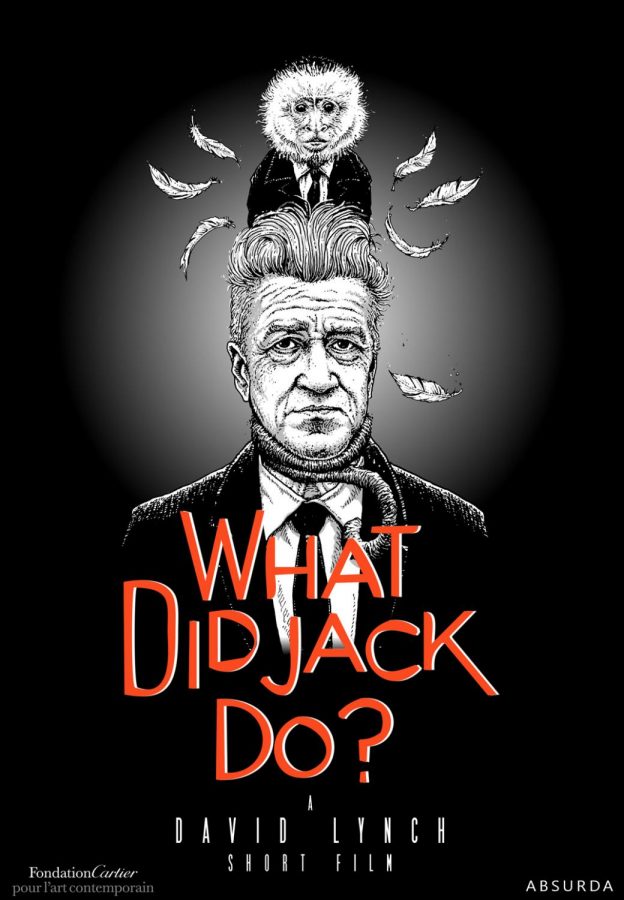 “What Did Jack Do?” is a fifteen-minute short film that takes place in a locked down train station. Director and writer David Lynch stars as a detective interrogating a Jack, a monkey voiced by Jack Cruz, who is suspected of murder.
The film is in black and white and has the screen scratch and vignette of the noir movies it was inspired by. The first shot opens with Jack sitting alone at a table before being joined by the detective.
The film is utterly surreal. Almost all of the dialogue is delivered in cliche phrases and jokes. It’s a fascinating experience for viewers to eke out meaning from the occasional line that is delivered straight.
The lines usually follow some sort of conversational logic, the slew of idioms slowly informing some sort of meaning. Whether that meaning is relevant to the plot can vary.
However, sometimes they’re delivered nonsensically, such as when the detective declares “Well, there is no Santa Claus,” completely unprompted. In this way, the comedy comes in its purest form by simply delivering something unexpected.
The film can elicit quite a laugh as Jack’s mouth shifts uncomfortably across his face, and his creaky, almost robotic voice keeps spouting overused one-liners that somehow still manage to be funny due to their absurdism.
These moments are engaging and could certainly carry the movie on their own. However, what’s even more compelling is when the cliches themselves advance the plot, which is more often than one might think.
As the film proceeds, certain themes and concepts tend to recur in the cliches that are being used. Farm animals, especially chickens, become evidently important early on. The first cliche Jack says is “Birds of a feather flock together,” and the nods to something fowl continue.
When the occasional line comes through that isn’t an overused gag or saying, it can be almost startling. These usually come from the detective, who begins to grill Jack suddenly. The monkey keeps level though and diverts the conversation back into a barrage of cliches.
Picking out the plot from all the red herrings is a joy. However, watching the movie more than once reveals there were fewer of these metaphorical fish than the initial sitting might have left the viewer tasting.
The plot itself is fairly straightforward, but the movie delivers it in a way that keeps you guessing and just too short on information to make any real judgements.
Lynch did a great job of showing and not telling in a very strange way. The dialogue between Jack and the detective makes up the entire film, but the details of past events are slowly shaken out of Jack. That is, when the detective can get him to stop spouting out-of-context punchlines.
There’s no score in the film, but music does make an appearance. How exactly that works is a bit of a spoiler, but when it happens, the laughs are unstoppable.
As a result of its noir stylization, the film has limited camera angles and simply cuts back and forth between Jack and the detective for most of the film.
There are a couple shots of the hallway off from the room they’re in, and towards the end, there’s a few minutes where the camera does something other than stare directly at the character’s faces, but these are the exception.
Given its short running time, the camerawork doesn’t get too stale, but a bit more exploration wouldn’t have hurt.
Overall, “What Did Jack Do?” is a great way to spend 15 minutes being utterly confused, amused by a monkey and a man spouting lines that are entirely overused. It’s a strange film that doesn’t overstay its welcome.
“What Did Jack Do?” is available for streaming on Netflix.