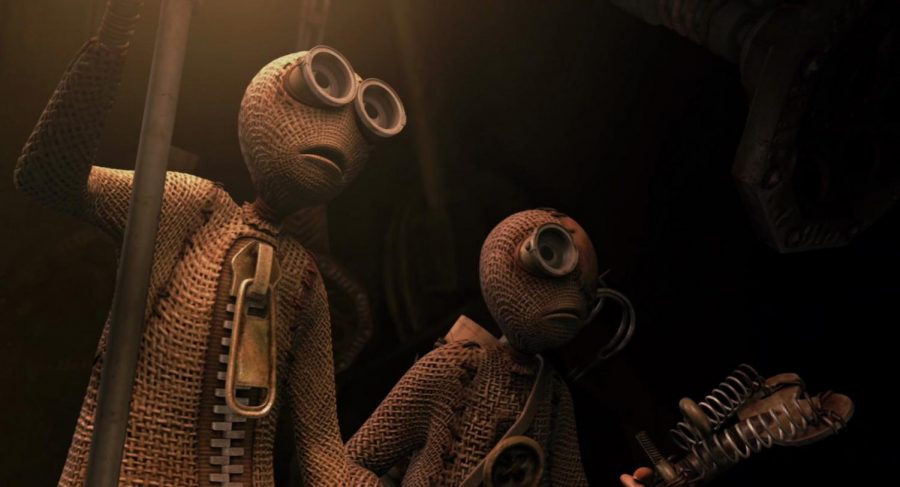 9 and 5 exploring some old ruins

One of my favorite underrated gems of animation is a post-apocalyptic horror movie starring a collection of ragdolls whose goal is to save all life on Earth.
Based on a 2005 short film by Director Shane Acker of the same name, “9” is a visually stunning animated work. Tim Burton’s role as producer left a clear mark on the film’s style, and it was even released by Focus Features, the same production company that brought us “Coraline” in the same year.
In the aftermath of a war between robots and humans which killed off all life on the planet, hope rests in the mechanical hands of nine sentient ragdolls who are hiding away in the ruins.
All of the ragdolls, also called Stitchpunks, are numbered and known to each other and the audience only by these numerical monikers. Elijah Wood stars as the titular main character, the youngest of the ragdolls who is driven by compassion and curiosity.
He and the rest of the cast do a commendable job, even if a few of the more emotional lines seem a little flat. John C. Reilly plays #5, a nervous caretaker to the rest of the group, and he does a wonderful job.
#7 is played by Jennifer Connelly, who portrays the aloof feminine warrior well. As #1, Christopher Plummer delivers a cowardly old man, blinded by his fear and misplaced faith, a character whose symbolism as a priest is painfully obvious to adults, but may be lost on children.
#9’s curiosity ends up inciting the main conflict of the movie when he awakens the Machine—a broken down piece of technology which spends the rest of the movie hunting down our heroes as they fight for survival and search for a way to defeat the awoken evil.
We learn more about the Machine as the movie progresses, but it is a bit overexplained. Exposition is another of the areas where “9” struggles because of its split audience, spoon-feeding worldbuilding to appease younger audience members who might be lost without these information dumps.
This is part of the film’s greatest shortfall—the undecided audience. It seems that the team was unsure whether to market the movie towards adults or children, and as a result the tone seems to suffer.
Its grim setting and violent nature lend it to being enjoyable by a more mature audience, and the daring choice to include gruesome character deaths pushes it firmly into a PG-13 rating.
While often labeled as an adult movie, “9” seems to have suffered from the stigmas that animated means “for kids,” and “for kids” usually means painfully obvious storytelling, so much of the story was inelegantly forced to attention when it could have unfolded beautifully in the background.
That said, it also does a lot with its scenery, and the atmosphere of the film conveys a great deal of meaning. There is almost always plenty of light in “9,” but that simply leaves viewers more able to see the destroyed landscape in greater detail.
The light itself is almost unsettling—with so many horror movies depending on darkness to scare viewers, the brightness requires creativity in the approach of something sinister.
And the sinister things that the Machine sends at our protagonists are terrifying indeed. All of the monsters are robotic, assembled from metal scraps and human bones alike, in some truly twisted and creative character design.
The use of small objects in the design of the world is also incredibly thoughtful. X-Acto knives, scissor blades and sewing needles become spears, swords and crossbow bolts for the miniature protagonists.
A calendar page that tracks the living and dead ragdolls, the wheeled sole of a roller skate which serves as a gurney and film reels which operate as pulleys are a few of the details in “9” which provide a sense of scale and lend themselves to the aesthetic of a world ravaged by war.
The animation and art are also beautiful on their own—a healthy balance of visual realism and grungy stylization helps keep the film looking fresh and high quality, even after ten years of animation technology developments.
The action sequences are fluid and intense, and the way the shots are composed are artistically informed and resonate with a meaning of their own.
The scenery’s carefully constructed nature often plays into the action. Decrepit buildings crumble under the weight of the Stitchpunks’ robot assailants, and broken-down machinery poses threats to both sides of the fighting.
Overall, “9” is an aesthetically beautiful, if story-hungry example of animated horror. It is available for streaming on Netflix and other sites.