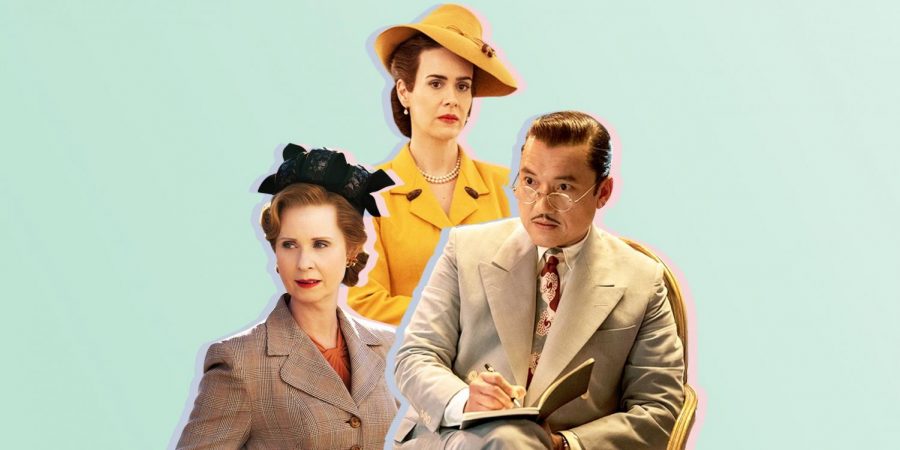 “American Horror Story” creator Ryan Murphy released his newest glam and gore series on Sept. 18. The Netflix series, “Ratched,” follows the origin story of Nurse Ratched from the book “One Flew Over the Cuckoo’s Nest.”
The show is stylish in its costumes, has gorgeous set designs, but has obscene storylines that distract from the story of Nurse Ratched.
The show takes place at Lucia State Hospital in Northern California in 1947. The set designers did an outstanding job creating scenery that fits the time period. The costumes were perfect replicas of what nurses and normal people wore that year.
Sarah Paulson stars as Nurse Mildred Ratched. This is her fifth show with Ryan Murphy, and I am surprised she was picked for this role. Paulson is an amazing actress in her other work that she does with Murphy, but this role falls flat. Paulson can be a chameleon with her acting to transform into historical figures she is portraying but her Ratched is bland.
The acting for this show is great but not fantastic. Sarah Paulson’s Nurse Ratched is nothing compared to Louise Fletcher’s portrayal of Ratched in the 1975 film “One Flew Over the Cuckoo’s Nest.” I could be judging Paulson harshly here since this is the first season, but Fletcher was outstanding.
The cast list is amazing. Most of the actors are new to Murphy’s work and they did not disappoint me. Finn Wittrock stars as Tolleson, a serial killer who murdered four priests, who is sent to Lucia to be cleared for trial.
Cynthia Nixon stars as Gwendolyn Briggs, the governor’s press secretary and Ratched’s love interest.
Jon Jon Briones is Dr. Richard Hanover, the doctor in charge at Lucia, who uses a deranged set of treatments on his patients.
Sharon Stone is Lenore Osgood, a wealthy heiress who hires a hitman to kill Hanover for disfiguring her son.
A few of the characters give off their own sinister feel: Nurse Ratched and Dr. Hanover most notably. Hanover is a strange man and his backstory is eerie. The name Ratched gives her character a sense of mystery as none of the characters know who she is once she arrives in California.
Ratched’s harsh demeanor appears whenever she speaks to patients or to people who negativity interact with her. A moment that stands out is when Ratched learns that a young woman arrives for a lobotomy to cure her lesbianism.
The show uses all eight, one-hour episodes to reveal the horrors that patients receive at the hospital. From flesh-burning hydrotherapy to botched amputations, but the level of gore is not as crazy for a Ryan Murphy show. I have watched every season of “American Horror Story” and the level of depravity used to depict the characters’ deaths or punishments does not compare to the little this show offers. I was expecting gruesome murders, but this show left me disappointed.
The setting at Lucia State hospital is clean and crisp. The walls and exterior of the hospital are a dreadful white and the patients’ rooms are full of the missing colors. The nurses wear bright teal uniforms that give them a striking, authoritative look. Ratched herself is a stylish woman. Her lavish and bright colored outfits hide her dark, monstrous interior. The supporting characters wear dull, boring browns and reds in their suits or dresses. Even Ratched’s mint green car has more style than the elusive flapper dancer Louise.
The show has a confusing number of storylines. This first season tries to give the backstory of every character but fails miserably. One of the major disappointments about this season is how long it takes to learn Ratched’s backstory. She was an Army nurse during World War II and had no nurse training. Ratched forces her way into her nursing job at Lucia State Hospital before her serial killer brother Edmund Tolleson arrives.
The one thing I was not disappointed with was the cinematography. The visuals are stunning. The crisp and vibrant costumes make the characters stand out whenever they are placed in a dull setting. Ryan Murphy has always worked with the best set designers, costume designers, casting directors and finds unique locations for filming. Murphy’s collaborators on his shows are the best in the business. The behind-the-scenes work is spectacular. The writing, lighting, music, and editing make Murphy’s shows stand out.
Overall, this is not my favorite show from Murphy. “Ratched” did not fall as short as Murphy’s “Glee” did. I enjoyed what I watched and would recommend this to anyone who loves his work. The next few seasons will develop Ratched’s character more in-depth and will soon tie into the film. Season two is on hold with production because of the pandemic, and this gives me hope that the next season will be better.