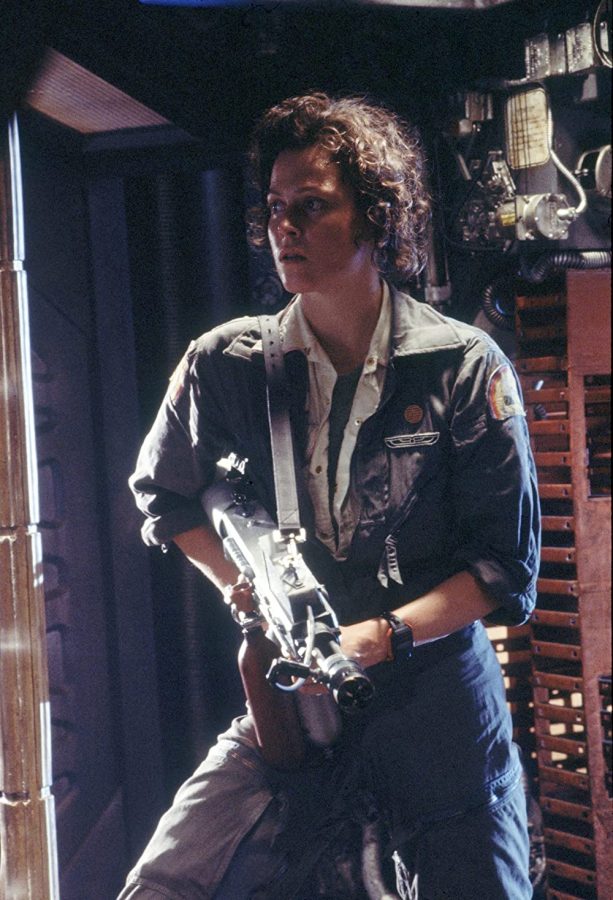 Sigourney Weaver as Ellen Ripley in the 1979 classic "Alien."

Despite it being on my mind as a film I wanted and needed to see, I dawdled for a long time before watching 1979’s “Alien” since I was worried it wouldn’t live up to my expectations.
However, I was delighted by a slow-burn horror film with moments of explosive terror, all taking place over a grungy sci-fi backdrop.
“Alien” tells the story of the crew of the Nostromo, a company-owned space-freighter transporting ore back to Earth. The crew takes on an unwanted visitor after landing to respond to a potential distress signal, and the guest soon becomes a deadly threat.
Directed by Ridley Scott, whose work also includes the original 1985 “Blade Runner” and 2015’s “The Martian,” Alien received mixed reviews on release, but over time has become a classic of both the science-fiction and horror genres.
Produced and written by Dan O’Bannon, “Alien” was based on a story by O’Bannon and his friend Ron Shusett. However, the final screenplay saw much influence from producers David Giler and Walter Hill.
In her first major role in film, Sigourney Weaver leads “Alien” as Ellen Ripley, and she breathes life into the unnerved but determined warrant officer. Ripley became intertwined with the franchise resulting from “Alien,” and Weaver has made appearances as her across several films.
Ripley also became one of the first archetypical strong female protagonists, defying the gender norms of film at the time, while still maintaining a depth of emotion and a few flaws that make her a fully fleshed-out character.
The rest of the crew is made up of captain Dallas (Tom Skerritt), executive officer Kane (John Hurt), science officer Ash (Ian Holm), navigator Lambert (Veronica Cartwright) chief engineer Parker (Yaphet Kotto) and engineering technician (Harry Dean Stanton).
The whole cast’s acting is marvelous—the tension seeps through the screen as the crew’s numbers begin to dwindle, and emotional moments don’t feel forced or undersold. The characters all have a depth of personality, and their responses to stressful situations are believable.
The iconic chestburster scene contains some of the best performances by the cast—in part because they were not fully informed what would be happening. The blood came as a surprise to them just as much as it did to the audience.
The gore in the film actually hit a sweet-spot for me—I enjoy a properly bloody wound, but I often find horror movies to over-expend on the fake blood budget in a pitiful effort to shock audiences. “Alien” hit a satisfying balance of selling the wounds without dumping buckets of red goo across the actors and set.
The set itself was beautifully designed, and it informed much of the tone of the movie. The interior of the vessel looks more like a diesel-punk submarine than anything that should be put to trial in the expanse of outer space.
The hallways are cramped, and corners are tight. Pipes and electronics are exposed rather than being tucked safely behind a wall. The lights are dim, and the layout of the spaceship feels unintuitive, lending to the horror of the alien possibly being anywhere.
The retro-futuristic aesthetic served “Alien” incredibly well. Though I don’t remember where, I once heard it used as an example for setting’s impact on storytelling—imagine if “Alien” was set on a brightly lit and fully functional craft. The horror would be all but lost.
The stunning visuals carry outside of the spaceship as well—the models used to display its exterior are incredibly detailed, and the brief time spent on a planet is interesting and filled with intimidating structures and unsettling atmospheres.
The cinematography is also impressive. The beginning of the film features long, trailing shots which establish the setting of outer space and gothic space-ship. Once the action starts, the cameras emphasize how cramped the Nostromo really feels, and the daunting size of its invader.
When fully visible, the big bad is unfortunately not as scary as the uncertainty of its location. While certainly grotesque and physically imposing, it’s a little too stiff and clumsy when removed from the shadows, though this rarely happens.
The dripping saliva and tightly stuffed teeth redeem this in close-up shots as the alien peeks out from the darkness. Most of the horror in “Alien” comes from the environment, and the looming threat of the monstrosity is more daunting than its occasional appearances.
One of my favorite aspects of the movie is its impressive commitment to the “show don’t tell” rule. Information is delivered nearly seamlessly through intentional visuals and careful dialogue. Only a few exceptions are present where the crew overexplain to each other.
For the most part however, these slightly unnecessary exposition dumps are made believable in the context of the movie—such as the science officer explaining theoretical information to the more hands-on and practical members of the crew.
If you want to watch a horror movie that slowly builds tension and has genuine scares, then don’t make the same mistake I did. Watch “Alien” as soon as you can.