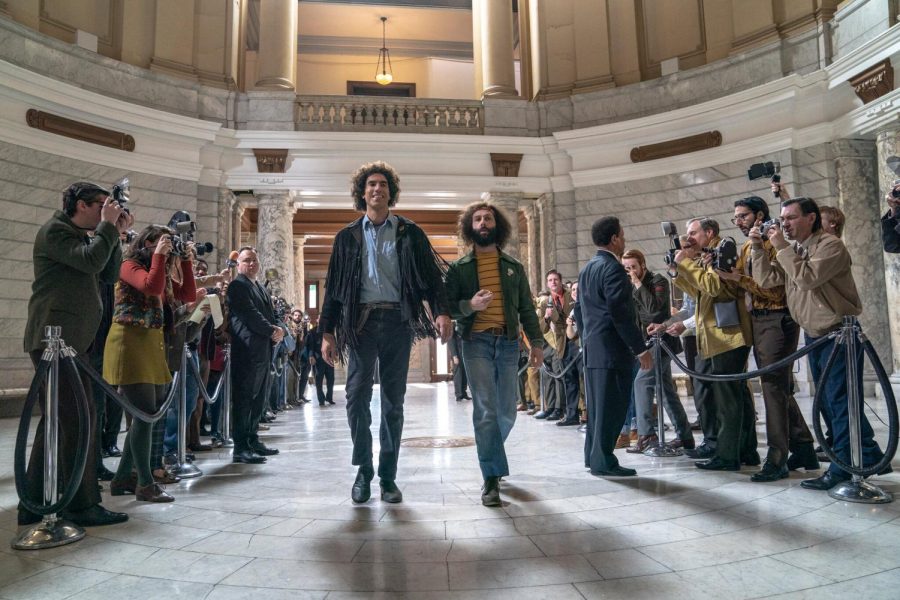 The war in Vietnam was not going well in 1968, and although some 16,000 police and national guard were deployed to the streets of Chicago, the Democratic National Convention in that city did not go well either. Ten thousand protestors gathered during the convention to call for an end to the war: violence ensued, and the Chicago Seven were born, though they did not know it yet.
“The Trial of the Chicago Seven,” written and directed by Arron Sorkin, brings the events of that summer to your small screen and living room couch in a smashing manner.
Sorkin, creator of “The West Wing,” brings his knack for tight dialogue to bear on the Chicago Seven, though perhaps not in quite as free ranging and aggressively witty a way as in “The West Wing.”
This film is based on real events, so a more serious tone is to be expected, though that does not preclude sharp dialogue – searingly so in some cases. The interplay between Tom Hayden (Eddie Redmayne), Abbe Hoffman (Sacha Baron Cohen), and their lawyer William Kunstler (Mark Rylance) is particularly memorable.
The Chicago Seven, as they became known, were charged with conspiracy and crossing state lines with intent to riot in connection with the mayhem outside of the 1968 Democratic National Convention.
The trial amounted to a kangaroo court, in which the defendants and their attorneys received a total of 175 citations for contempt of court, and nearly all charges were dropped or thrown out on appeal. It’s not an inspiring view of the American criminal justice system.
The Chicago Seven were initially eight. Bobby Seal (Yahya Abdul-Mateen II), leader of the Black Panther Party, was charged alongside the seven others, but the court declared a mistrial in his case (the circumstances of which yield a particularly disturbing scene in the film).
The film skips back and forth across time and space: from the riots to the courthouse, to Hoffman doing standup (though calling it “standup” is a “little reductive,” in his words), and back to the courtroom.
The court is the anchor of the film, though many of the best performances happen elsewhere. The cutting back and forth through time works remarkably well most of the time and is established early in the film as its most unique character trait, though it can lead to occasional confusion.
In the end, the clever editing produces a pleasing effect, particularly Barron Cohen’s performance of Hoffman doing a standup show intercut with other people explaining what happened in different settings, and of course, the ever-present courtroom. The drama moves forward effectively in a sort of crabwise manner.
“The Trial of the Chicago Seven,” a CrossCreak and DreamWorks film, was released directly to Netflix due to the pandemic. It comes just in time for the election and drops into the middle of yet another seething-hot time of political tension in this country.
It’s not really the kind of film to inspire, and it does not do a perfect job of explaining what really happened in Chicago, but it’s a drama, not a documentary, so the lapses can be forgiven.
Whatever factual failings it has, they are fully overcome by the quality of cinematography, writing, and production. The film does not show the same out-and-out gooey idealized vision of democracy as “The West Wing.”
Rather, it’s the opposite, with the assassination of Black Panthers, police brutality, and a judge apparently completely uninterested in the rule of law. Yet it strikes an idealistic note nonetheless.
It shows people – all kinds of weirdos – putting themselves on the line for what they believe in, and that, somehow, ends up leaving a feeling of agency that is appreciated in this season of uncertainty.