A much maligned magnificent masterpiece 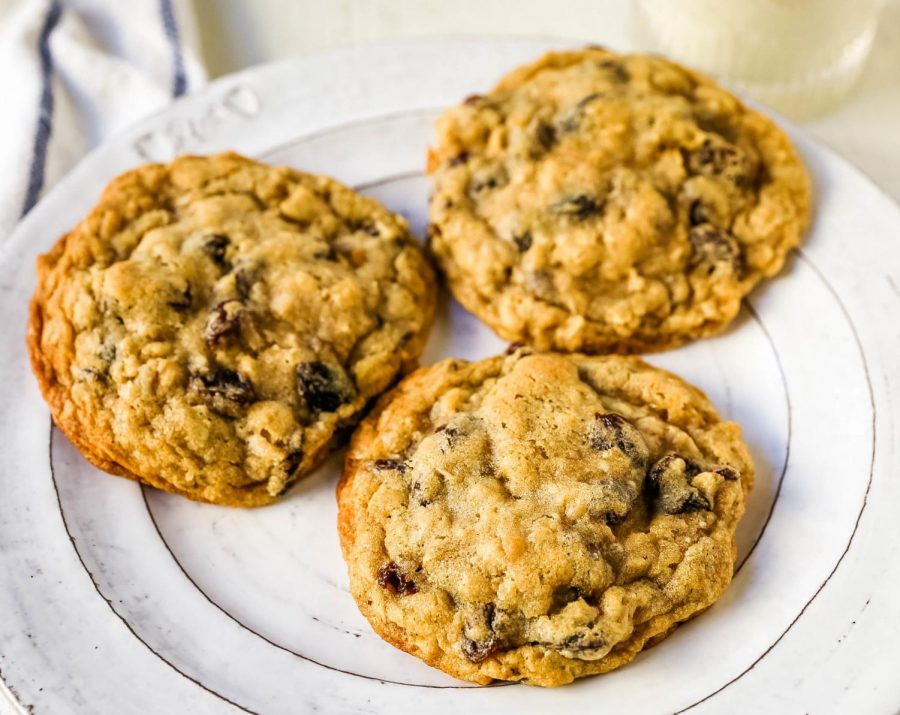 Oatmeal raisin cookies!
For anybody who hasn’t run screaming, let’s talk about these delightfully packaged sources of… oatmeal and raisins.
I’m not exactly the most food-oriented person in the world. On the scale of gourmet to gourmand, I fall pretty firmly on a different measurement system–one which labels my culinary preferences as just above “lizard-brain” in terms of pickiness.
I try to keep a professional relationship with my food–I eat it for sustenance, and I typically do so quickly. I do not make comments or uncomfortably suggestive noises while I eat, aside from an occasional, “Oh, heck, that’s good,” on an enjoyable first bit, after which I return to silence.
I like good food as much as any person, but when it comes down to it, I really just eat what looks like it will keep my body running the longest.
That said–y’all gotta lay off oatmeal raisin cookies.
Given my incredibly low food standards, I’ve never understood the fiery disgust with which some people treat these sweets. I think they’re an excellent way of combining two generally unpleasant foods into a single, operational snack.
I’ll be the first to say that raisins alone are gross–they’re despicable little welts that taste like the worst parts of wine and the best parts of kerosene. Those tiny, red boxes that are only sold in October, sporting little miss Dorothy Sunshine on the front, can go straight in the trash where they belong.
But once you put the raisins into something else–such as a mix of nuts and chocolate, a peanut butter-filled stick of celery or a harmless blob of baked oats–those little dried-out berries add a bittersweet flavor to rival even the most heartfelt of series finales.
Now think about a plain oatmeal cookie.
Yeah, that was unpleasant, wasn’t it? If only there were another flavor to go along with that classic combo of oat and meal. Something sweet and textured that pops with just enough sour to let you know it means business.
But nope. Like yourself, casual cookie consumers across the country will have my head for putting these shriveled-up sugar pellets into my oatmeal-filled mixing bowl.
“Chocolate chips!” you cry. “We wanted chocolate chips!”
“Plebeians,” I mutter, shaking my dehydrated juice sacs into the mix while you aren’t looking.
The only valid argument I’ve ever heard is that they sometimes look like chocolate chip cookies and can “trick” people into taking a bite of something they didn’t want–but that’s not even a good point.
Just look at the damn things! Read a label, good lord. Do you people just bite into the first thing you see?
That was something our ancestors did so that we wouldn’t have to–myriad proto-humans willingly sank their teeth into mystery meals, and some, I assume, died–so future generations could look before they lick.
Then, immediately after forsaking this gift, you blame it on the food that you just shoved into your mouth without a second glance.
Why? Why is it the cookie’s fault? It knows what it is–it’s an oatmeal raisin cookie. It shouldn’t be blamed for you not properly educating yourself before taking that oral leap.
Would it be your fault if someone bit you on the arm said, “Sorry, I thought you were an ice-cream cone,” then spat a chunk of your flesh into the trash can?
Would it kill you to ask? Somebody had to have made those cookies–I would hope that they know what’s in them. Maybe just stand at the table and pester passersby until someone with better vision than you can take a closer look at that suspicious little pastry.
And you know what?
Oatmeal raisin cookies aren’t any worse than classic chocolate chip.
Maybe it’s just because of my general disinterest in food and my ability to be satisfied with anything put in front of me, but I’d go so far as to say I downright like oatmeal cookies more.
Some of the best cookies I’ve ever had have been oatmeal raisin. They’re good cookies. There’s a reason grandma has been making them for so many years–they just work.
Plus, there’s just so much hate for these little guys that I just feel obligated to love them. If nobody else wants these lumps of grains stuffed with dried grapes, then I’ll gladly take them.
So don’t expect me to have a memorable experience with your macaroons or see God in your souffle–if I reach enlightenment by eating food, it’ll be an oatmeal cookie, baked by a kindly old church lady, and donated to a school fundraiser.