Del Toro has a bit of Gothic fun 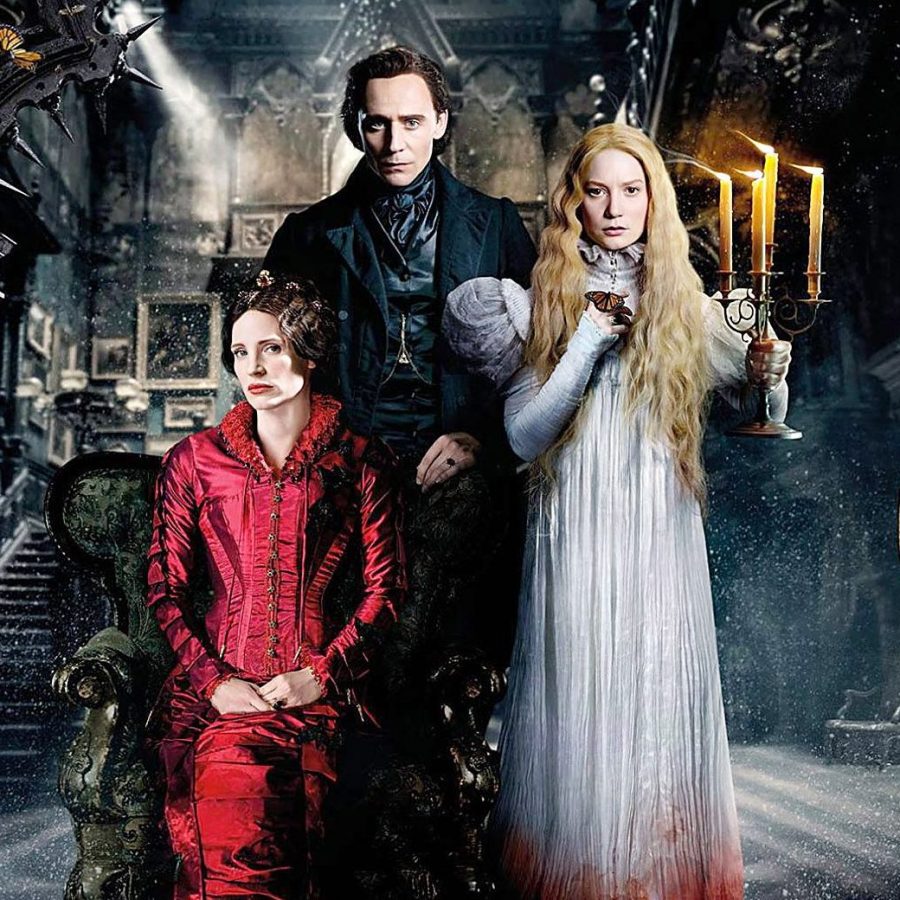 Everyone loves a good ghost story, especially one that takes place in a beautifully enticing and spooky location. The idea of dancing in a mansion where snow is falling through the roof to light yet striking piano music does sound like an enticing dream.
That dream might quickly turn into a nightmare if I were to mention that four ghosts, victims of a brutal killer, are sharing the halls that are meant to be an example of peace and beauty. The 2015 horror/romance “Crimson Peak” is the epitome of a dream turned nightmare.
In this gothic piece, a young woman from Buffalo, New York is in the process of writing a novel. Edith (Mia Wasikowska) is obsessed with ghost stories, stemming from a visit from her deceased mother when she was a child.
Quickly, she is infatuated by a charming traveler from England, Sir Thomas Sharpe (Tom Hiddleston). After the death of her father, Edith marries Thomas and moves to his remote English mansion, which he shares with his secretive sister Lucille (Jessica Chastain).
Edith isn’t bewitched by the beautiful home for long and suddenly finds herself seeing ghosts and visions from the past, alluring her to the tragic history of the mansion and those who live within it.
This movie is definitely one of the more interesting films that I have seen in the past couple of years. It was directed by Guillermo del Toro, who also directed “Pan’s Labyrinth” as well as “the Shape of Water.”
Del Toro is known for his abnormal film ideas that often leave viewers with a sense of disgust and intrigue, and “Crimson Peak” is another to add on to his list of creepy yet beautiful. Not only did he direct this film, but he also co-wrote it alongside Matthew Robins.
Their writing brings the audience back to the Victorian era, while also allowing a feeling of familiarity coinciding with the delicately sweet love story between Edith and Thomas.
There is never a moment where it feels as if the dialogue is rushed or out of place within a scene. The writing is only exemplified by the genuinely amazing acting from everyone within this movie.
“Crimson Peak” has a small cast, which can sometimes throw off the entire structure of the story if one person is even the slightest bit off on their acting. In this case, however, the small cast is what makes this movie even more enjoyable.
It allows the audience to truly delve deeper into each character and know how they fit into the overall story. Mia Wasikowska’s portrayal of the young and innocent yet strong-willed Edith is divine.
Wasikowska became known due to her appearance as Sophie in HBO’s “In Treatment” and as Alice Kingsley in Tim Burton’s “Alice in Wonderland.” Her work in this movie is just as amazing as any other, and she is able to keep us on her side the entire time without ever faltering or stepping out of the battered character.
This can also be said for Tom Hiddleston and his portrayal of Sir Thomas Sharpe, arguably the most interesting character of the film, only rivaled by his sister. Hiddleston’s ability to charm the audience is only the beginning of his character.
He is able to show us each layer of Thomas Sharpe, slowly but surely allowing us to catch a peek at his past and why he is suddenly questioning the life he and his sister have been living.
Lady Lucille Sharpe is an utterly complex and emotionally tortured character whose story is perfectly shared by the expert skills of Jessica Chastain. Chastain earned wide recognition in 2011, when she was nominated for best supporting actress for her role in “The Help.”
It’s easy to see just how Lucille got to her state in life due to Chastain’s level of expertise. Of course, the acting and writing can only go so far, and without the costuming and cinematography of the film, we would just have three actors in a mansion.
The film is full of vibrant colors despite being a gothic piece, which helps the audience feel more attached to the story. We can look at the colors of the costumes and set and feel the life within them rather than be detached by the bland blacks, whites and grays of other gothic films.
The costume designer, Kate Hawley, who also worked on del Toro’s film “Pacific Rim,” goes above and beyond for each character and truly encapsulates their personalities through color and presentation.
Director of cinematography, Dan Laustsen contrasts the colors of the set and costumes enough to constantly give an unsettling yet welcoming feeling. Laustsen later went on to work with del Toro again for “The Shape of Water.”
Of course, the tone of this movie would not be complete without the haunting score composed and conducted by Fernando Velázquez. His compositions add to the already anxiety-inducing film and allow the audience to be fully immersed into the horror.
Overall, this movie was a ride that I’m glad I took and would most definitely take again. It is available on multiple streaming services and will shake audiences in all the best ways, making them contemplate how much truth is behind old ghost stories.