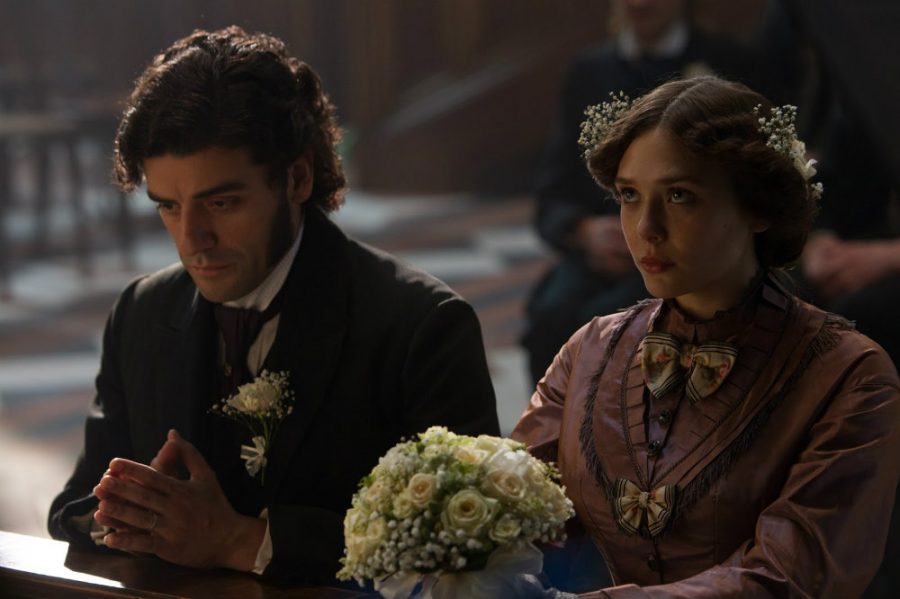 Everyone can enjoy a sweet romance story every once in a while, even those who think they are rather cheesy. However, what happens when the sweet story turns sickening in the blink of an eye?
I recently watched a film that matches that description perfectly, and it was shocking how amazing it was. The 2013 romance/thriller “In Secret” is a perfect depiction of sweet turned sickening.
The movie follows the life of young Thérèse (Elizabeth Olsen) and her rather awkward and unnatural family life. After the death of her mother, Thérèse is brought to live with her aunt, Madame Raquin (Jessica Lange), and her sickly cousin out in the countryside of France.
As she grows up, she is forced into being the caretaker and wife of her cousin Camille (Tom Felton) by her aunt, and they eventually move to Paris. In the new setting of the city, Camille brings an old childhood friend, Laurent (Oscar Isaac), home for an evening of games with other friends. Laurent quickly becomes a regular in the house, allowing him to get closer with Thérèse, where an affair begins.
The film is interestingly adapted from an 1868 French novel titled “Thérèse Raquin,” written by Émile Zola. This was actually the third novel written by Zola, but the first one to achieve wide fame mainly because of its rather controversial topics including adultery and murder.
There is also a stage play by the same name adapted by Neal Bell, as well as multiple movie adaptations produced between 1928 and 2013. This most recent adaptation for the screen was done by Charlie Stratton, who was also the film’s director.
Stratton’s direction is something to be marveled at simply because of the false comfort that is constantly promised throughout the piece. Of course, his work wouldn’t be complete without the actors chosen to give it life.
The heartache of this movie is brought together by the phenomenal acting of its rather small cast. Elizabeth Olsen’s portrayal of Thérèse is truly outstanding and impressive. She is able to beautifully encapsulate all of Thérèse’s torment of being forced into a life that she has had no say in.
Olsen’s breakout role came in 2011 when she was in the thriller “Martha Marcy May Marlene,” which earned her a nomination for Best Actress for the Critics Choice Movie Awards. However, Olsen is best known for her appearances as Scarlet Witch in the Marvel Cinematic Universe.
Of course, Olsen’s character wouldn’t be complete without the ones who are constantly pushing Thérèse down, the first being her aunt, Madame Raquin.
Jessica Lange puts so much emotion into every character that she plays, and that is the same for this movie. Her portrayal of Madame Raquin is award-worthy and only adds to the discomfort that is felt throughout the film.
Lange is best known for her roles in “Tootsie,” “Grey Gardens,” “King Kong” (1976), and “American Horror Story.” She has won many awards including multiple Emmy Awards as well as Golden Globe Awards. Her exceptional work in this film only adds to her long list of amazing performances and allows us to better believe her relationship with her son, Camille.
Tom Felton’s portrayal of Camille is outstanding. We are never told what sickness Camille has throughout the film, but that never seems to matter because of the way that he pulls us into the story and leaves us fully believing that there is indeed something wrong with him. Camille is nothing like Felton’s better-known character, Draco Malfoy, and it allows us to experience his wide range of acting.
Last but not least is Oscar Isaac, who gives us an outstanding performance of the love-struck and tormented Laurent. Isaac’s portrayal of an unhinged man will leave any audience member questioning if they truly know someone. His ability to charm not only Thérèse but everyone else around him makes his character so intriguing.
Of course, this movie wouldn’t be complete without cinematography. The director of cinematography, Florian Hoffmeister, has worked on many different period pieces, including “The Deep Blue Sea” and a “Great Expectations” mini-series. Through his work, he is able to paint a picture through camera shots that can sometimes tell more than the characters do.
The magnificent shots are brought out even more through the costuming done by Pierre-Yves Gayraud. Throughout this film, we are given dull lighting to express the oppressing feeling that Thérèse is left with, and the costumes only add to that. The period-perfect garments, while being interesting, are made of rather dull colors, adding to the bleak feeling of the film.
Working to perfectly complement this grim look is the score, composed by Gabriel Yared. His ability to put anxiety into music ties the film together and allows us to be fully surrounded by the twists and turns within the piece.
“In Secret” is a movie that I would definitely recommend to my friends who enjoy thrills with a bit of romance. At the moment, the film can be found on Hulu and Amazon, with a premium subscription, as well as Youtube, iTunes, and Apple TV starting at $3.99. No matter where it’s watched, it will be worth it.