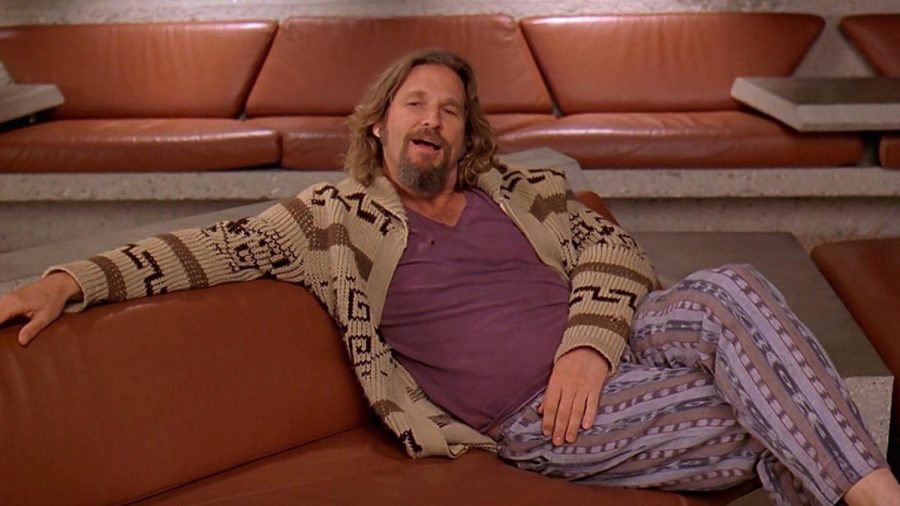 Sometimes when you’re down and out, it’s just nice to watch a nice family movie about pissing on rugs, German kidnappers, and a case of mistaken identity.
Of course, you won’t find a new family-friendly favorite in “The Big Lebowski,” but you’ll definitely find a new (old) favorite to play when the kids are asleep. This 1998 Coen Brothers classic is a must-see, and I was kind of ashamed that I’d never had the pleasure.
The Dude (Jeff Bridges), a rugged Californian stoner with a matchingly decrepit apartment, gets home one night to an ambush by two thugs. They give him swirlies in the toilet bowl and demand, “Where’s the money, Lebowski?” The Dude has no idea what’s going on, of course, and only after they destroy his apartment and piss on his rug, they realize that they’ve got the wrong Jeff Lebowski.
Thus begins one of the weirdest capers I’ve ever watched, complete with ransom notes, a severed toe, pornstars and German kidnappers.
Bridges’ on-screen chemistry with John Goodman and Steve Buscemi as The Dude’s bowling buddies makes for wonderful, cringe-worthy moments during the trio’s bowling tournaments, including quite possibly the best scene in the movie with a rival bowler named Jesus (John Turturro). Jesus would later get his own spin-off movie—a friend told me about this while we were watching, and I didn’t believe him. I had to Google the monstrosity myself. It is, in fact, real.
Speaking of chemistry! Julianne Moore plays Maude, a whip-smart redhead feminist with a thing for, well. Naked painting, I think. After he’s summoned to her studio, The Dude and Maude get just a little tangled up… in more ways than one.
Another bright spot for this film is the meek Donny, whose stellar bowling and shy demeanor immediately made him my favorite. While Walter (Goodman) has complex feelings about Donny’s wacky and often interruptions, the interactions between the two are as heartfelt as those little chalky candies you get on Valentine’s Day: somewhat forced but ultimately friendly and endearing.
With few exceptions (the viking helmet?) the costuming of “The Big Lebowski” is just as stellar as you’d expect a Coen Brothers film to be. High contrast, brightly colored sets and dazzling cinematography abound.
Because of the movie’s wacky plot and various dream sequences, the film almost feels like a fever dream played out through reels. One scene towards the end of the movie encompasses The Dude’s new love interest, his love of bowling, and other aspects of the movie into a kind of well-lit dance of props and actors with sex appeal, which ultimately comes across as both visually stunning and disturbing. Ostensibly it’s a replacement for a sex scene, but I didn’t get that the first time through.
The cinematography is unequalled—at least in my ignorant, unqualified mind. I tend to find emotion can be ham-fisted into movies by way of music and good angles, but I don’t feel forced here. Heartfelt, thoughtful moments are amplified by set design and a thoughtful score.
Some comedies push fluff throughout the main narrative as a way to pad the story, but “The Big Lebowski” refuses to make anything superfluous. Just like all the rest of their movies, the Coen brothers pack each minute with details to make even the most astute moviegoer need a second time through. Every tiny detail, every ridiculous scene, they all build to the conclusion. What might appear to be a one-off gag originally will come back, and I found myself wanting to re-watch just to catch all the little things—something I very rarely do.
Sam Elliot plays the Mysterious Stranger, whose deep voice is as mellifluous as is it is distracting. What the heck is this mustachioed cowboy doing in a bowling alley, and what kind of godlike omnipotence does he possess? He’s a deus ex machina… in a cowboy hat?
It’s a heartfelt story of brotherly love and loss wrapped in Coen comedy clothing, and it really deserves to be a mainstay in your movie collection.