Burned but not forgotten 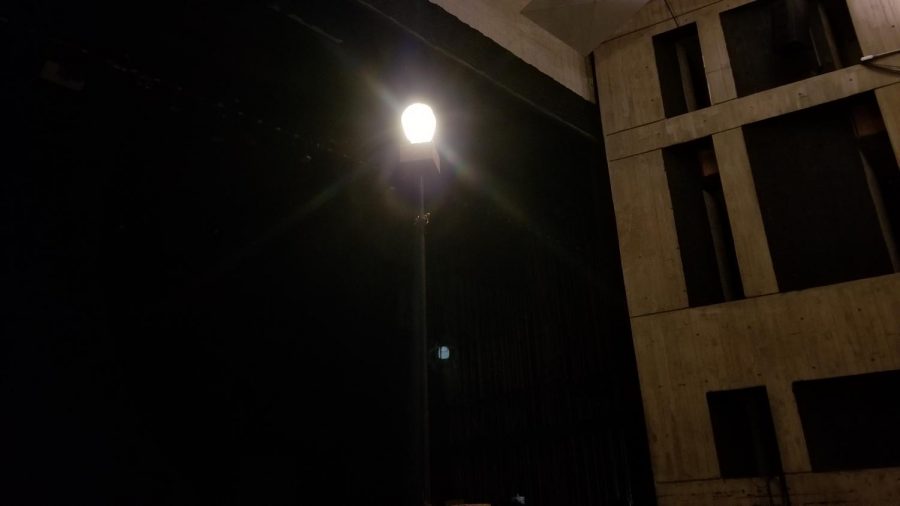 The lonely light on an empty Dibden stage

Upon entering the mainstage of Dibden, you can see a single light bulb on a long stalk as it sits patiently in the middle of the stage. The unshielded source casts a brilliant luminescence on the room and its occupants, making the shadows wiggle and shimmy much like a crowd of spectral dancers running along the wall.
Before this beacon stands a circle of students, tautly eager to begin with the evening’s rehearsal of Dibden’s fall production, “Unburn Me,” an adaptation of George Bernard Shaw’s “Saint Joan.”
Even during nightly housekeeping, the Polaris Company, NVU-Johnson’s student theater company, stands with rapt attention, each listening to the list of business items that Director Laura Roald is outlining before the first run through of the play can commence.
It’s a peculiar sight, unique to a devised theater production only a few weeks out from its debut. Among the items listed on the agenda is a full run through of the play — the script, narrative and scenes freshly constructed only a few weeks before.
The play has come a long way since its inception at the beginning of the semester as cast member Addie White pointed out.
“Even in just one rehearsal too. It’s wild how fast it happened,” White said. “It was a shock for me the first time it happened, because I’m used to just doing a more classic play.”
This fall’s production is part of a new chapter of devised productions for the Performance Arts and Technology program housed in Dibden Theater, the first of which came out last year.
Directed by Laura Roald, “Unburn Me” set out at its inception to bring together all aspects of theater and performing arts. Students have worked to research and write the performance, create the musical compositions, build a digital media accompaniment and, of course, serve as actors in the final production.
For Roald, this method of student-driven production is familiar in concept if not necessarily in practice.
“This is a different kettle of fish because it really is putting the emphasis on bringing out the students’ creativity … and working on the skills to make that polished and professional,” Roald said. “If you want to be here and be a part of this process, I will find a way to work with you. Some shows, you have to say there are x number of roles, but here, we’re making the roles.”
As for her own role in the Polaris Company, Roald noted that she intended to be more of a mentor than a heavy-handed director.
“My directing role in this is about guiding and shaping this [play] and making sure we have something to put on stage,” Roald said. “To get there, my role as dramaturge is to listen and provoke and do my darndest to make sure what we put on stage is what we as a company have developed and worked on.”
Such a student-centric production is not without its challenges, and for Roald and her fellow company members, there has been plenty of opportunity to learn.
For many of the cast and crew, this is the first time that their opinions have been asked for and respected, though with that freedom and agency comes the responsibility to be a productive member of the company.
Matt Parker, a theater student and another member of the Polaris Company, praised the atmosphere that he and his fellow cast mates have cultivated.
“It’s a unique environment to actually have a say and to be able to choose to participate in,” Parker said about devised theater. “I could be a fly on the wall and still be thrilled to be a part of it because it came out of all of our brains.”
“Unburn Me” centers around the legendary historical French figure of Joan of Arc, also the eponymous hero of Bernard Shaw’s work “Saint Joan,” which just came into the public domain this year and has served as the basis for the production.
Once they determined a place to start, the hard work of reverse engineering a play in eight weeks began.
“The idea of Joan of Arc was already there, and we went through George Bernard Shaw’s version of ‘Saint Joan,’” Parker said. “We went through as a company and broke down where he was coming from and the things that we knew to be historically true, and where he filled in space, where he made stuff up, and where he gave voice to people and opinions and character traits to Joan that historically just didn’t fit but were in the show.”
The members of the Polaris Company had their own ideas about how they wanted to work with Joan’s story, a matter that was seriously considered as they worked to build the production from the ground up.
“We kind of came to the conclusion that Joan is very projected upon and used as an icon for a lot of different things, and no one really knows who she was. We’re taking that concept and turning it into a play, being aware that we also don’t really know who she was,” White said when asked about the inspiration for the play.
The production of “Unburn Me” is scheduled for Nov 4-6 at 7 p.m., though what form the production will take is still in question. Depending on COVID-19 restrictions at the time, the Polaris company is hoping to perform the play live on the Dibden stage, though masks may be required for the cast and crew. If things worsen, then Roald is prepared to go remote, an eventuality that will demand a little more creativity for the company before the final show.