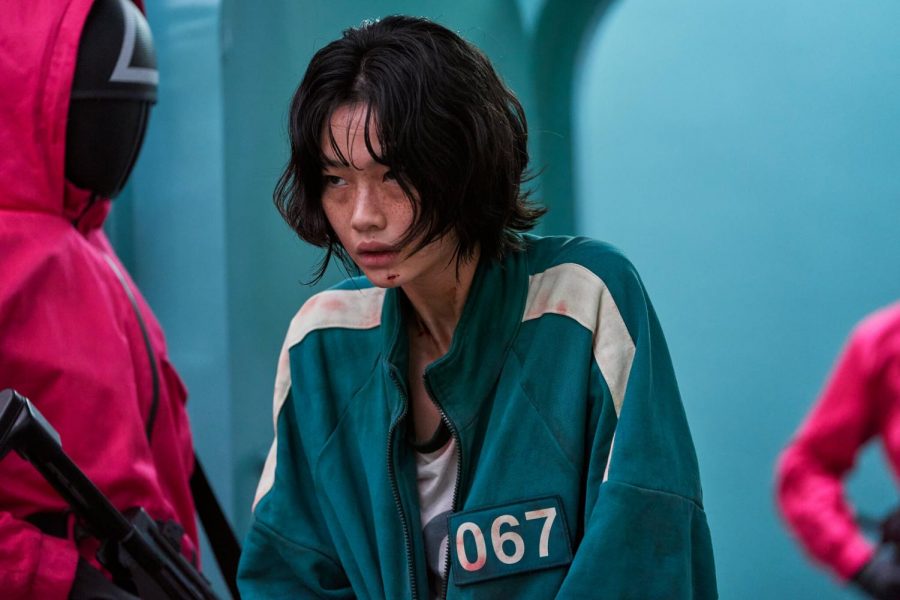 If you’ve been following pop culture, you’ll know “Squid Game” is now the most streamed television series on Netflix. Beyond bringing in millions of dollars for the platform, “Squid Game” is also bringing millions of viewers to the world of Korean cinema – and it’s about time.
Created by South Korean director Hwang Dong-Huyak, “Squid Game” has exploded into the global streaming charts. Topping global hits such as Netflix’s very own “The Witcher” and “Bridgerdon” with over 142 million streams since its release on Sept. 17, “Squid Game” is an impressive feat to behold — especially with only a $2.8 million budget.
The “Hunger Games”-styled series brings to light numerous issues of the modern world, asking questions of the status-quo and what we so blindly accept. It’s a story of worker exploitation, wealth inequality and defeat under the crippling realities of capitalism, all brought to life with stellar acting and writing.
“We are living in an era where people follow neoliberal ideology without even knowing,” noted director Hwang Dong-Huyak in a New York Times interview, “so I think people are able to identify with the story.”
“Squid Game” takes place in South Korea, a country that, much like the U.S, suffers from massive wealth inequality. Within the show, a secret organization run by masked elites seeks people in extreme debt or financial hardship to compete in a series of classic Korean “playground games” in hopes to be the sole winner of a 46 billion won prize (38 million USD).
Those who do not make it to the end are eliminated. Literally. But even with the looming threat of death, the contestants — who have volunteered to be a part of these games — decide that living in the real world is a fate almost worse than death and continue in the competition.
Those who fail to pass the games are carted away to be disposed of while a bedazzled “piggy bank” fills with the money each contestant’s life was worth, an ironic fate no different than that of the outside world.
Post-war South Korea saw a massive boom in economic prosperity after the Korean War, often dubbed the “miracle on Han River” according to South Korean journalist for the NY Times, Jin Yu-young.
Yet now, South Korea faces growing household debt, growing home prices by upwards of 50% and political scandal as just the surface of issues surrounding the country. Sound familiar?
Outside of impeccable storytelling, “Squid Game” is a visual masterpiece. Set pieces are beautifully created from colorful mazes to grandiose structures of childhood memories representing lost days of freedom the contestants once had.
Coupled with the brutality and vivid violence present in the show, this juxtaposition of innocent child’s games and cheerful colors to savagery and death is on its own a brilliant decision within the director’s vision. If the story doesn’t grasp attention, the satisfying visuals will.
Beyond the subtle, and not-so-subtle, hints of anti-capitalist rhetoric and reality checks of the world many live in, “Squid Game” has been chosen as a welcome mat to the world of Korean Cinema.
Korean films making their way into the Western world is nothing new. Films such as “Parasite,” directed by academy award winner Bong Joon-ho, and “The Handmaiden” by Park Chan-wook were large successes in American theaters — yet pale compared to the massive success and praise of Netflix’s newest release.
As a result of “Squid Game’s” sudden popularity, more and more people once ignorant to the world of Korean film may now indulge in the dense selection of Korean cinema that offers a unique lens into the nation’s culture and history.
For those who love film and the creativity possible within it, it’s a dream come true. Hell, there’s still people who still don’t know who Wes Anderson is — shame.
If you haven’t seen “Squid Game,” do it. It’s a tremendous experience through and through. It’s intriguing, brilliantly acted, and it’s the perfect baby step in learning to read subtitles in film. But, let Squid Game be the first in many.
“Parasite,” “The Handmaiden” and “Burning (Beoning)” are incredible works of storytelling and are must-watch films if you haven’t already. So, if you don’t already have an account, go sign up for a free trial on Netflix and prepare yourself for a wild ride of emotion, surprise, and reflection. Witness what you’ve been kept from for years.