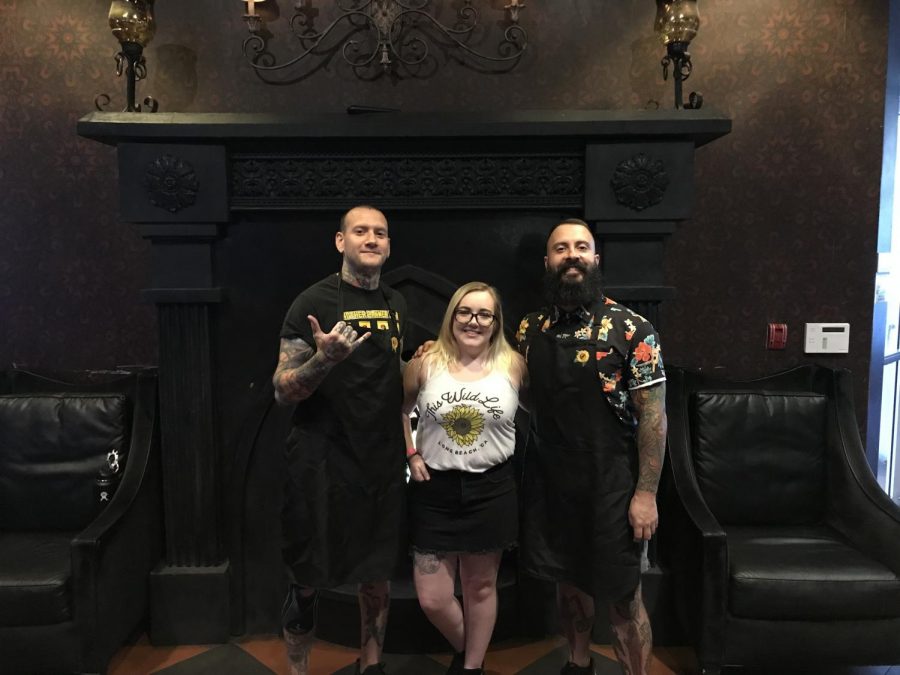 Reporter Alli McLaughlin with the band This Wild Life

The self-declared “Hot Topic Mumford & Sons” band, This Wild Life, just released their fourth full-length album on Oct. 15 titled “Ever Blossom.” The album includes 10 songs, ranging from upbeat summer bops to emotional deep-cuts. Although they mostly play acoustic ballads now, the band originated as a five-piece pop punk group.
“Our first release was an EP back in 2011, but that was written in 2010,” said front man Kevin Jordan. “At the time, we had another vocalist sing on the tracks, but before we released it, he decided he didn’t want to sing in a band anymore. I took a stab at it, and ten years later, here we are.”
The band self-released their first two EPs, titled “Pop Shove It” and “Heartflip.” Eventually, however, they decided to make the move to acoustic music.
In 2013, they released a cover of a song by metal band Bring Me the Horizon, which gained them a lot of attention and eventually led to them signing on to Epitaph Records. They released three full-length acoustic albums during their time with Epitaph, but in 2020, they announced their departure from the label to pursue independent production.
“[The] biggest difference was doing all the production and engineering ourselves,” Jordan said. “I’ve always been interested in recording, so I’ve been a sponge in all the studios we’ve worked in over the years. Anthony, on the other hand, never had any experience recording, so he had to learn to record guitar and bass from scratch.”
Although some of the songs from “Ever Blossom” were originally conceived as far back as 2015, This Wild Life did the bulk of the writing and all of the recording in 2020. They’ve relied heavily on their community on Twitch and Discord to gain engagement during the pandemic since they could not play live shows.
“To be honest, the main driving factor behind self-producing the album was cost efficiency,” Jordan said. “We’ve made records with a $10,000 budget, and we’ve made records with a $100,000 budget, and the final results are so similar. Of course, it’s nice to have someone else do the editing and heavy lifting on a production, [but] there is a lot of gratification to being involved in the whole process.”
The album starts off with an upbeat acoustic tune and the lyrics, “If I could throw a stone against your home/So hard that it would knock it down.” The first track, titled “I’m Scared to Lose You,” has a more unique inspiration than most of the band’s lyrics.

“That song is about Forrest and Jenny Gump,” Jordan said during a Twitch stream. “I watched that movie a million times when I was a kid. The very first lyric of the song is that scene where Forrest and Jenny are older… and she just freaks out and starts throwing rocks at the house. When I was really young, I didn’t understand that.”
The emotional lyrics paired with a catchy beat and light-hearted chorus make for a well-rounded song. I found that most of the album seems to follow this pattern, especially in “If It’s Cool With You, I’m Cool With Being Through.” This song is filled with dance-inducing summer vibes.
The bridge of the song says, “I am broken, I am down here on my knees/Too much emotion, too little of the things I need/I am cautious to let another lover in/I am nauseous, your love it left me with the spins.”
The music video of this song features Jordan roller-skating through Joshua Tree while band member Anthony Del Grosso, posed as the grim reaper, chases him down.
The band likes to feature one “wedding song” on each album, and many fans have used their music in their own weddings over the years. The wedding track for this album is a song called “Through all the Gloom.” Although most of their music is acoustic, this song is much softer than the majority of the album.
The second verse of the song tells the story of what the relationship has become. “Got the house and the dogs, soon kids will come along/I’m just grateful to watch as you become a mom/Your love is common sense when my head is full of stress.”
When I listen to this song, I can’t help but imagine getting married some day and swaying along to the rhythm. You can tell just how in love Jordan is with his wife through these lyrics.
“Ever Blossom” also includes “I Don’t Love You Like I Want To” featuring a band called The Happy Fits, who opened for This Wild Life on their tour in 2019. Although this song is short in comparison to their other songs, This Wild Life was able to capture so much emotion simply in the way the song is sung.
The album closes with the most emotional song, “Still Wondering Why You Left Me Behind.” This slow song was written by Jordan about how his dad wasn’t present in his childhood and how it impacted him at such a young age.
Jordan sings, “And by the time I got the nerve to call you off/Well, the tar and nicotine finally did their job.” This is not the first song the band has released about Jordan’s father, as his childhood has had a major influence on his lyrics throughout the band’s discography.
Overall, this album feels true to the band’s self-described theme of “prescription-strength emotional music” while still feeling fresh and new. You can stream “Ever Blossom” on Spotify, Apple Music and YouTube.