Dune disappoints but not fully 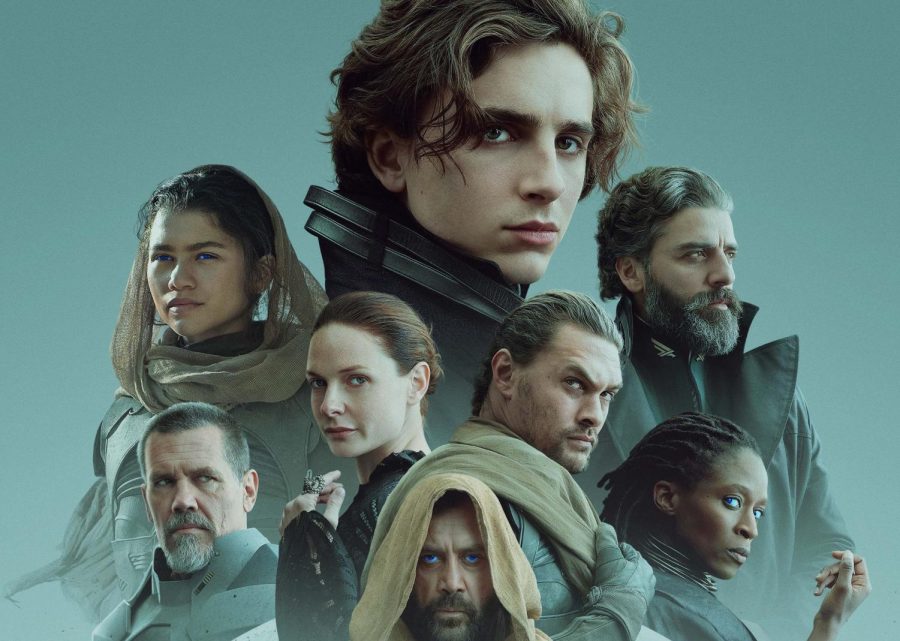 If you’re a sci-fi nerd, then I’m sure you’re already aware of the long-awaited film adaptation of Frank Herbert’s beloved and iconic 1965 novel “Dune,” starring Timothee Chalamet as the 15-year-old protagonist, Paul Atreides.
This film adaptation was talked about for at least a year before its release in October 2021, but being completely honest, it wasn’t worth all the hype. Don’t get me wrong, there are some absolutely beautiful aspects of this movie; the scoring gave me goosebumps multiple times, and the cinematography is absolutely stunning. But, I have to say I am pretty tired of a couple key aspects of this film.
If you’ve seen any of the advertising for this adaptation of “Dune,” you’ll probably remember that Zendaya’s character, Chani, was featured heavily in the trailers. This advertising does not make much sense for what is seen in the film; Chani is mainly shown in Paul’s dream sequences, and she does not get introduced until the last scene of the film. A little disappointing for a Zendaya fan like me.
Another thing I am pretty tired of seeing in any kind of popular media is white-knighting for some kind of alien desert people who are clearly coded to be Middle Eastern. While the Middle Eastern influence on the music was beautifully done, the scenes of graphic violence being committed against the people of Arrakis was difficult to watch.
Showing colonizers and making them out to be the good guys is just not what I am looking for in such a historically political genre as sci-fi. I am fully aware that house Atreides might have been nicer than their Harkonnen counterparts, but in the end, they were both trying to manipulate the people of Arrakis for their own gain. Not a great move, in my opinion.
My last gripe, before I get to more positives about the film, is with the casting choice of Paul Atreides. Now, I know that Timothee Chalamet is a pretty popular actor among the young demographic that “Dune” would be targeting, but he is 10 years older than the character he is playing.
Paul Atreides is an uncommon teenager in many ways, but making a 25-year-old man play a pubescent teenager is never the way to go. There are plenty of young actors that might have been able to bring more perspective to the role. There was only one scene in which I thought Chalamet had the energy of a young teenager.
Now, on to more positive notes. Again about the music — the soundtrack for this film was done absolutely masterfully. The scoring was done by Hans Zimmer, who also did the scoring for films like “Bladerunner 2049,” “Interstellar,” “Inception,” and “The Lion King.”
It’s not surprising at all that the music for this film was absolutely gorgeous. With the unconventional use of empty sound and focus on women’s vocals, the “Dune” soundtrack truly has an exceptionally otherworldly atmosphere to it.
The other main thing I enjoyed was the cinematography done by Greig Fraser, who also did the cinematography for “Zero Dark Thirty” and “Rogue One.” Some of the shots I specifically remember are those of the Fremen and the Bene Gesserit. Both were often featured from far away, which I felt really added to the mysticism of their roles in the story.
Other than Paul Atreides being played by Chalamet, who is far too old to convincingly play a 15 year old boy, most of the acting in the film was decently satisfactory. Oscar Isaac did a wonderful job playing the hardworking and determined Duke Leto Atreides.
Isaac portrays the caring father and plays a sweet partner toward the equally well acted Lady Jessica, who’s played by Rebecca Ferguson, which makes a family of extremely strong and angular jawlines in house Atreides.
I also specifically enjoyed Jason Momoa’s character Duncan Idaho, who had a fun dynamic with Paul Atreides. Momoa gave Duncan a very fun feel to him, along with the characteristic sassy energy Momoa brings to all of the performances I’ve seen of his.
If you’re in the market to have a decent movie-going experience, I would advise going to give Dune a shot. While I did not love the film, there are absolutely plenty of redeeming aspects as well. If you are a fan of classic science fiction, then you’ll probably find the film generally satisfying with its very otherworldly atmosphere and classic chosen one and interplanetary-colonization tropes.