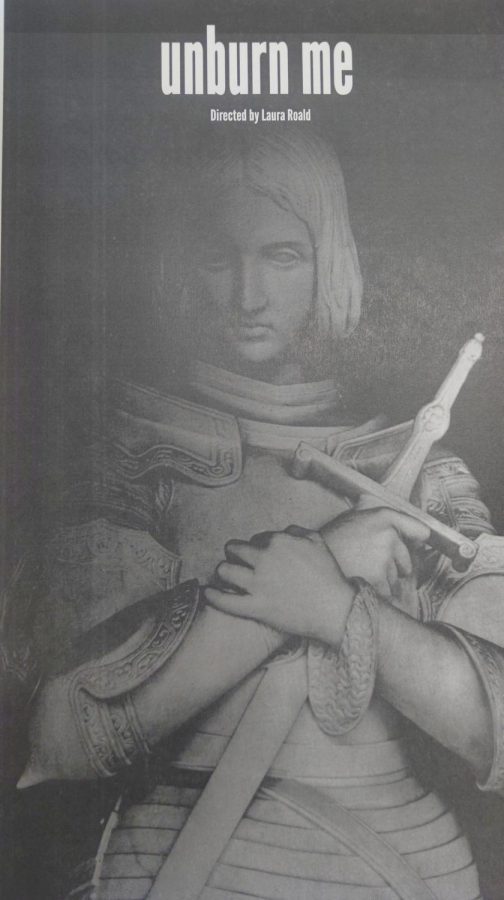 On Nov. 4, I caught the opening night of “Unburn Me,” presented by NVU-Johnson’s new theater company “Polaris” and directed by Laura Roald. Though I was a theater kid in high school, I am a little disappointed to say that this is the first live play I have attended in nearly ten years.
My girlfriend joined me, and our expectations were low. A comedy about Joan of Arc written by the theater company who were performing it was not checking a lot of the boxes we look for in our entertainment.
However, by the time it was said and done, we couldn’t have been happier that we attended the show and found ourselves thoroughly entertained by the entire performance.
The show begins with the ensemble taking the stage in front of the curtain to give us an overture of Joan’s life and what we could expect to see in the show. As the cast leaves the stage and curtains rise, we are stunned to see Joan of Arc being burned at the stake with impressive flames produced by a projector.
The flames soon turn to bolts of electricity and Joan of Arc is resurrected by way of Mary Shelley and brought to the stage of Dibden Theater, confused but very much alive. Actress Addie White plays the character of Person Joan, and her performance is one of the highlights of the show.
Person Joan is the backbone of the story in “Unburn Me.” White received zero breaks and stayed on the stage for 100% of the performance. Person Joan is the real Joan of Arc, unburned and resurrected, returned to the present-day and forced to watch a play depicting her life and death unfold before her.
Person Joan is accompanied by an empathetic member of the audience, Tate, who was played by Taylor Michaud. Tate and Joan watch the ensemble from the stage and give context.
White’s performance grows in strength as the show rolls on, and audiences might eventually begin to realize that “Unburn Me” is a play that is as much about looking back on your life and analyzing how your decisions made you who you are today as it is about Joan of Arc.
Different actresses assume the role of Joan of Arc at different points in her life. This, in my opinion, added a fun range of performances to depicting Child Joan, Citizen Joan, Soldier Joan, Prisoner Joan, and Saint Joan. This function certainly helped move the show through checkpoints in Joan’s life and made the subject matter easier to digest.
I can honestly say that there wasn’t a single weak point in Polaris’ ensemble, and each player had a key part. After the intermission, I was surprised to see that they peppered in some original music and featured a great interpretive dance number by Theresa Montalbano playing the role of Prisoner Joan.
I was mentally prepared for there to be a struggling cast member forgetting their lines or whispering inaudible dialogue, but that was not the case. The weight of “Unburn Me” was evenly distributed among the cast, and there were truly no small roles.
Each actor and actress brought nothing but thunder, and I found myself genuinely impressed by the talent on display and proud of each and every performer that took the stage on opening night.
In particular, the performances of Katelyn Shaw and Alex Gallagher stood out along with White’s. These three thespians embodied their roles and commanded the attention and appreciation of the audience. Controlling a stage while elevating the performances of your fellow castmates is no easy task, but they made it look that way.
There were great jokes throughout the performance, and I very much considered this to be a subtle comedy that aims for something more than humor. The conclusion featured a powerful idea that your life, though short — and in rare instances, ended by being burned alive in front of over a thousand people for listening to your heart — can carry purpose after you’ve departed the realm of the living.
My only notable criticism of the play would be the runtime of three hours. Google is telling me that most plays last between 2.5 – 3 hours, but this just felt long to me. Scenes such as Joan’s trial seemed to be twice as long as they needed to be.
While strong performances from the entire cast make the length bearable, it is hard to sit in a tiny seat for that long when you kind of understand where the show is going by the time the intermission is over.
The epic length of “Unburn Me” is a small complaint when the play so impressively exceeded my expectations. The sets were minimalistic yet large and impressive. The lighting was creative and professional. The performances were first-class.
Polaris did a wonderful job putting this show together, and I will jump at the opportunity to review their next performance at Dibden.