Gathering of Fools no such thing 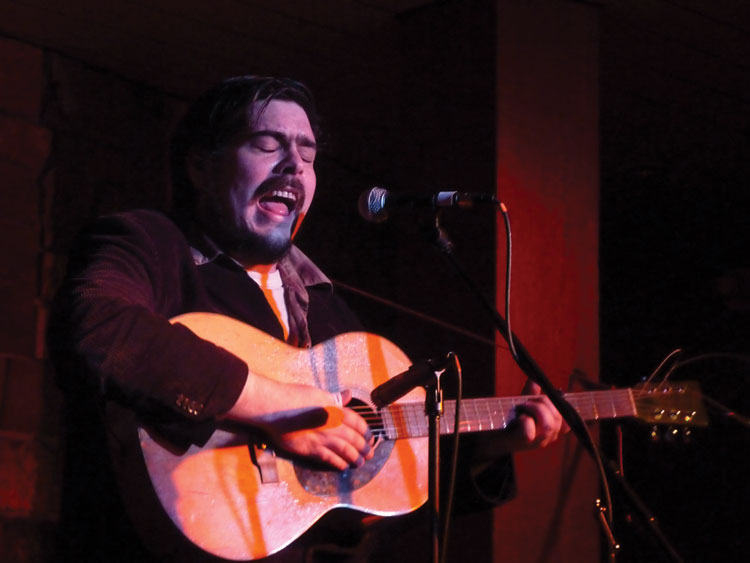 Feral Foster, who was up early that evening

It wasn’t a gathering of fools. It wasn’t even a gathering of idiot savants. Those assembled, three groups from Brooklyn – Feral Foster (one man), the Whiskey Spitters (four men, one woman) and Avo (three guys) – transplanted American music roots and set ‘em down in the Stearns Performance Space, Apr. 3.

All three groups are associated with the Jalopy, a musical theater/school/bar in Red Hook, Brooklyn. It’s a place for musicians to gather, play roots music and set down roots for a musical family. One of the Whiskey Spitters, Geoff Wiley, the standing bassist, owns the Jalopy. He started it with his wife after their marriage in 2006.

A recent New York Times profile described the Jalopy as “like some soulful machine stalled at the mouth of the Battery Tunnel.”

In the same article, one Jalopy student called its classes “a God experience for the nonreligious.”

The Times noted the student experienced a “harmony-inspired buzz” during the class, her first voice workshop.

The Fools brought enough “harmony-inspired buzz” to fill Stearns. They were as harmonic as heartbeats while two people kiss as a tractor lifts hay bales in the background, which is to say theirs is an Americana rhythm. I’m specifically talking about the Whiskey Spitters, who reminded me of hard work, accepted morals, rickety gas pumps, shining Thirties sedans, an economy gone to shit, straw, husbands and wives, and non-processed food on the table. Also gas lamps.

They play folk music, the Whiskey Spitters do, the kind that came before Pete Seeger swung it toward political rally. It’s white blues. They all have classically styled ‘do’s – but styled nonetheless – and some breed of facial hair. Mr. Wiley takes the cake with a beard almost as long as his bass.

But they aren’t like Henry Fonda in “The Grapes of Wrath,” the old sober “The old ways are the best ways”-as-they-chew-their-piece-o’-straw kind of American folk. They’re the guys who’d be regulars down at the bar on the corner of Main Street night after night, telling jokes, entertaining, shaking hands, making conversation, and having their beers bought for them at the end of the night.

They’d have earned them. The Whiskey Spitters have the jangling cosmic rhythm of an oooollllddd Ford tractor just after it starts.

They started with an old ditty from the Mississippi Sheiks. Line: “You gotta make it through the woods/If you can.”

The fiddler was particularly enchanting. They called her Chloe Swantner. She doesn’t quite fit in with the rest of the trim, bearded, professional men: she wore big overalls but had a Skrillex haircut, hair buzzed on the side, cut short up top, with a long ponytail down the back. She was tall and seemed to have the mental distance of a child – not an insult – mostly when she was playing her fiddle, adding a mysticism to her instrument to rival the green light in “The Great Gatsby.” When she played, she stood tall, so tall her spine stretched and her body looked like a question mark.

Feral Foster was a different story, the gloomy, terminally pissed kid in the back of the van. Slick dark hair, heavy black brow, cutting eyes, but gosh he’s got a warm smile!

His voice was like a badger that’d just drank a bottle of honey.

Then there was Avo, a goddamned rock band blitzkrieging this holy barnyard. They were loud in that little Stage Space, the pint-sized Seven Stories (a metal that stopped by Dibden last year – remember them?). And they were livelier than any rock group I’ve seen in my I’ll-never-tell number of years at JSC, like if Weezer had been listening to Chuck Berry, then drank a vial of Elvis Presley – fast, straight, simple, short rock ‘n’ roll by three guys in button-downs and khakis, bifocals optional.

The intimate stage setting was perfect for the event, even with the loudness of Avo (hey, they were good). All three groups, or two groups and old Feral Foster, who wore a dynamite purple suit, were cracking wise all through the evening, quipping to the audience, half of which seemed like they were already fans.

And in a tribute to the performers, who were not, they’ll be crushed to know, considered a Creative Audience event, those who wandered into the Stage Space, enticed by the noise, dark, cookies, brownies and coffee, stayed. They didn’t chat with their friends. They ignored the refreshments, or forgot about them – t’was a lot of cold coffee on that night. They were there for the music, and they stayed for it, just as, through these performers, roots music stays, breathes, lives, dances, jangles, cusses, spits and heals.