“Spring Awakening” exposes the angst of growing up 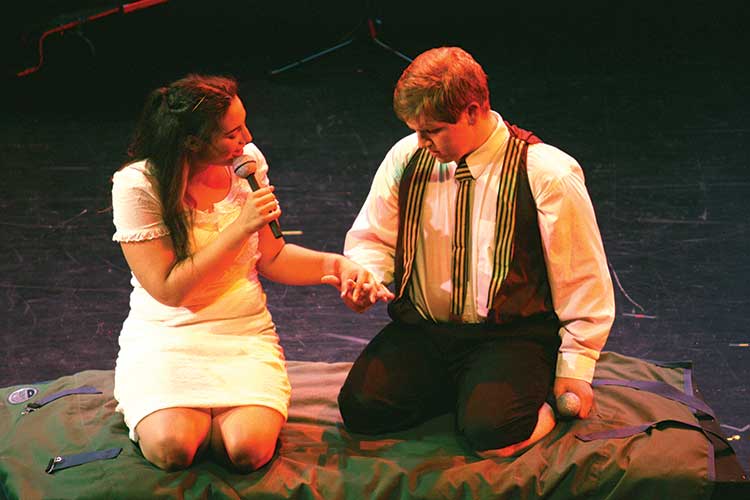 From April 18-21, Dibden audiences were treated to an eight-time Tony-winning musical, “Spring Awakening,” directed by Professor of Fine and Performing Arts Russ Longtin, and musical direction by Assistant Professor of Music Bethany Plissey.

This musical, written by Duncan Sheik and Steven Sater and based on Frank Wedekind’s 1892 German play, tells of a group of teenagers suffering from the throes of uninformed puberty.

When the tension in these characters’ lives reaches a boiling point, they reach for a microphone, hidden in their jackets, and they begin singing and dancing to one of the many songs that represent their internal monologues.

Multiple clueless (and cruel) adult characters, including professors, parents and clergy, try to stamp out the main characters’ individuality and conceal or confuse the truth about sexuality from them with often horrendous consequences. At every turn, the adults in the teenagers’ lives refuse to tell them the truth, refuse to listen to them, and refuse to have compassion.

At one point one of the girls, Lynne Dumais as Thea asks, “But how will we know what to do if our parents don’t tell us?” This is a testament to the play’s original writer, Frank Wedekind, that this question still resonates with audiences a hundred years later, in a completely different time and place.

Melchior (Marcus Provost) and the more naïve Wendla (Alannah Halliday) are playing with fire as their budding sexual desires begin to take root in a scene where Wendla begs Melchior to hit her with a switch. Wendla has no idea of the repercussions, even as their intimacy blossoms into passion and they make love for the first time. The tenderness Provost expresses during this scene is fabulous. If only all first-time sexual experiences could be this sweet.

Vanessa Cousins played Wendla for the Wednesday matinee and the Saturday night show, and was noted to have delivered a fabulous performance. This “Cast A” also had Alannah Halliday as Ilse, and Bridget Conway as Frau Bessel, the piano teacher, played by Sam Kilbride on Thursday and Friday as part of “Cast B.”

At the beginning of the play, Wendla begs her mama, deftly played by Michelle Sawyer-Houle, to explain the true idea behind the “stork” who had delivered her sister’s new baby. When her mother explains that a woman will only give birth when she is totally in love with her husband, Wendla believes she understands all there is to know on the subject, foreshadowing the troubles that her naïvete thrusts upon her, as she dies from a botched “back-alley” abortion later in the musical.

Another young girl, Ilse (Bridget Conway) has been rejected by “proper society” and is now an outcast living in an artist community and barely getting by, and along with the other abused young lady, Martha (Claire Demarais) we see two different interpretations on how youngsters deal with parental and sexual abuse.

Rounding out the adult women were Madeleine Gibbons as Frau Gabor, Melchior’s mother, and Taylor Cammer as Fraulein Knuppeldick. Both ladies delivered performances that left us wanting more, since the adults were not the focus in this musical.

Anxiety-ridden Moritz (Shani Stoddard), the most confused of the kids, has let his sexual curiosity unravel his already on-the-edge schoolwork and is one step away from failure. Stoddard’s eyes and facial expressions hold so much emotion that he gives one of the show’s outstanding performances.

Of all the kids, only Hanschen (Jonathan Howard) seems confident in his sexuality. He knows exactly what and who he wants and has no problem taking whatever that may be, even kissing fellow schoolboy, the sexuality-confused Ernst (Dan Schurman).

The adult males were played by a power trio of Tom Bartlau, Zane Watkins and Dakotah Senosac, who in total played 9 roles in this musical.

Abby Maurice, who played Anna, also took on the role of choreographer for this musical which was no easy feat. With over 20 musical numbers, Maurice succeeded in getting the characters moving with interesting dance numbers, using the platforms, the aisles of Dibden, and chairs as props in the dance numbers.

The show was wonderfully complimented by a six-piece pit band. Plissey and Ashley Dopp on piano, Steve Audy and Shane Hinkley on guitar, Pat Markley on bass, and Benj Spound on drums. The band was set back center stage with risers on each side where characters sat while on stage.

This show had an extensive tech presence who all performed their tasks well. Set design was done by Adam Higley, and the creative lighting was designed by Ethan McGovern. Stage Manager Taryn Glasser was assisted by Jasmine Carpenter and Tyler Wade. The sound design was facilitated by Charles Fredrick, who was assisted by Bonnie Cleverley. The period costumes were designed by Liz Spier and brought to life with Holly McDonald’s help, and make-up was done by Erin Keyes. Audio Visual was run by Liz Glasser, and Max Bowen operated the light board, with Liz Thompson as Spot operator. Props master was Taylor Shaw, and Kate-Lyn Pal also ran props. The run crew was Michael Brokowski, Adam Higley, and Nick Pepe.

This musical spilled its heart out into the audience more than once, and the feeling was overwhelming.