“Into the Woods” fills seats and enchants the people in them 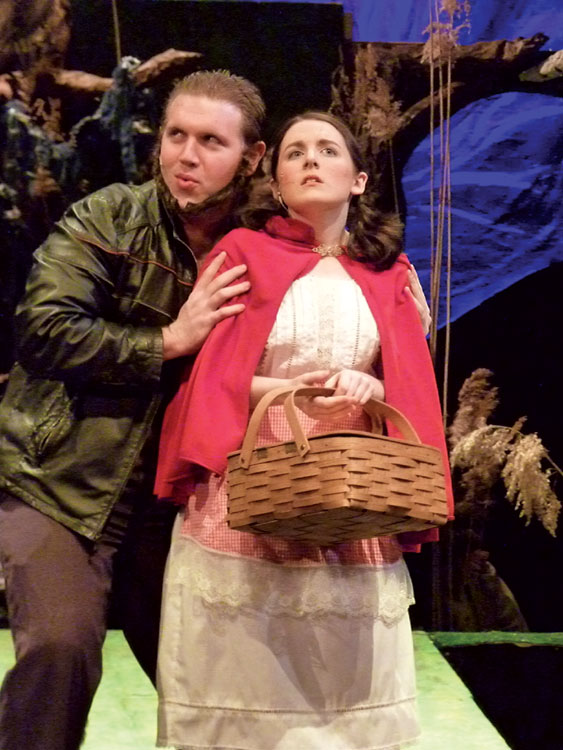 “I’m in the wrong story,” the Baker’s Wife (Kate Kendall) said to Prince Charming (Marcus Provost) after an illicit tryst in the woods. Throughout this fractured fairy tale, things that seem out of place continue to confuse, then delight the audience. Steven Sondheim and James Lapine’s 1988 Tony-winning musical “Into the Woods,” directed by Russ Longtin, was well-received by good-sized audiences each of the three evening performances.

The artful intertwining storyline weaves popular fairy tale and storybook characters in and out of the woods. It was filled with familiar characters like Little Red Riding Hood (Chelsea Detollenaere), Rapunzel (Vanessa Cousins), and Cinderella (Abby Maurice). The Baker (Jonathan Howard) and his Wife (Kate Kendall) yearn to have a baby. They go to the Witch, Taylor Cammer reprising Bernadette Peters’ Broadway role, who gives them a task involving Jack of Beanstalk fame (Thomas Dunn), Little Red, Cinderella and Rapunzel.

The couple is required to find “A cow as white as milk, a cape as red as blood, a slipper as pure as gold, and hair as yellow as corn.” All of them quickly learn that you have to be careful for what you wish. By the second act, these fairy tales blend into the human reality that is not at all “happily ever after.”

Detollenaere was tailor-made for the role of Little Red Riding Hood and delivered many of the lines that garnered guffaws from the packed theater. Rapunzel’s soprano voice rang through the audience as her Prince (Shani Stoddard) tried to find her in the woods. Dakotah Senesac, as the Narrator, sewed the action together and interacted warmly with the audience, until he was delivered to the giant, a certain death.

As both the Big Bad Wolf and Prince Charming, junior Marcus Provost delivers a performance that has the audience laughing and cringing at the same time. No one wants to believe that Prince Charming is not as charming as he seems. “I was raised to be charming, not sincere,” he says during the second act. As the wolf, Provost delivers the line, “There is no possible way to describe what you feel when talking to your meal.”

Jack’s mother (Liz Thompson) was frustrated by her son’s affection for a cow, and she sings “We’ve no time to sit and dither/While her withers wither with her/And no one keeps a cow for a friend.” Her frustration with Jack is palpable, as they are hungry, and Milky White (Shawn Wiebel) is not giving milk.

Cinderella’s stepmother was played by Danielle Godjkian, a Dibden veteran. Her daughters Lucinda (Samantha Drouin) and Florinda (Taylor Brown) were funny in their snobbishness, and once they were struck blind, the comedic factor was increased ten-fold. Newcomer to Dibden’s stage Jacob Crosslin played Cinderella’s weak-minded father.

Sam Kilbride played the dual role of Red’s Granny and Cinderella’s deceased mother. Dylan Ballou in his third performance as a freshman played the steward to Prince Charming. Adam Pilarski played the Mysterious Man (who turns out to be the Baker’s father) in his first role.

Designers set the stage cleverly. Scenic Designer Ethan McGovern and Master Carpenter Nick Pepe with the help of the Stagecraft class constructed an elaborate set employing numerous creative touches including reversible pieces transforming houses into woods and a suddenly unfolding bed appearing from nowhere in which the Wolf waits for his intended victim.
All set changes were done masterfully by a stealthy crew and were barely noticeable. Props Master Taylor Shaw and Assistant Props Master Ericka Salter added to this with well-placed props. Cory Dinsmore did an amazing job painting a beautiful backdrop of trees, which hung behind the set.

Set design goes hand-in-hand with costume design to set the mood of a production. Liz Spier has done exquisite costume design for over 10 Dibden shows, with this being no exception. Certified Bobbi Brown Makeup Artist Erin Keyes perfectly complemented the costumes with her makeup design.

As Master Electrician and Light Designer, Michael Brokowski set the mood with lighting that evoked the feelings of being in the woods at times, and the brightness of homes at other times.

Managing a large cast and crew is never easy and as third-time stage manager Jasmine Carpenter did a great job with Steph Zello as her assistant. Sound designer Charles Nelson kept the cast, each equipped with lavalieres (wireless mics), sounding great for the most part, although at times the band did overtake some of the vocals.

The pit band, directed by Assistant Professor of Fine and Performing Arts Bethany Plissey, provided the music and sound effects that helped audiences feel they were delving into the woods. The band consisted of Musical Director Michael Halloran on keyboard, Chelsea Gibbs on flute, Patrick Monaghan on alto sax, Ashley Clinger on clarinet, Joshua Clinger on trumpet, Benj Spound on percussion, Angela Hunt and Michele Sawyer-Houle on synthesizers.

With retirement looming in a year, this may well be Longtin’s last musical. With the help of Michael Halloran’s musical direction, Plissey’s conducting and Abby Maurice’s choreography, the timing, blocking and overall performances by the actors shone. Combined with the delicate art of fusing dialogue and music, this made this production a showcase of the hard work Longtin has put in during his 27-year “labor of love” at Johnson. “I have learned far more than I could ever fully teach,” said Longtin in the director’s note.

This was a big show with a large cast that enthralled audiences. It’s teeming with big messages and unforgettable music. Going “Into the Woods” might be scary, but if you avoid taking that plunge, you haven’t lived. Don’t keep your reality confined to a fairy tale world. The final message from the Baker’s Wife reminds one that people may leave you, but you’re never alone. And that’s the best kind of “Happily Ever After” there could be.