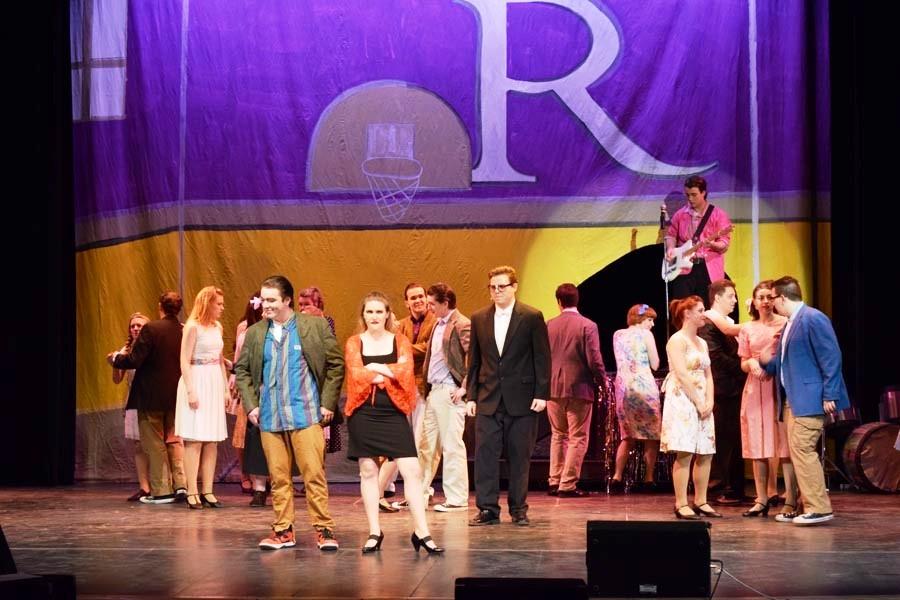 Director Patrick Sawyer-Houle sought to bring the musical back to its raunchy and quirky roots while still giving it an original feel.

Those thinking that going back to the roots meant the original script found that JSC’s enactment largely resembled the onstage revival that came about after the movie’s initial release. This mostly means that the songs that were written for the film were included, which isn’t surprising since they were the most popular to come out of the soundtrack (“Grease,” “You’re The One That I Want,” “Hopelessly Devoted To You” and the replacement of “Alone At The Drive-In Movie” with “Sandy”).

Instead, raunchy meant that we saw Jonathan Howard’s bare butt as he brought his character Roger to life. Howard’s skilled vocals were a funny contrast to his character’s mischievous personality, but this only added to the level of humor that he was able to convey.

Sam Lewis indicated in his biography blurb that he has dreamed of playing Doody since high school. I think that the character Doody has dreamed of having him play the role, instead. Lewis was boyish, wholesome and a great fit.

Together, the Burger Palace Boys were energetic and very obviously dedicated to their roles. Their goofy onstage relationships made the scenes where they interacted some of the most entertaining of the entire musical.

Thomas Gunn proved to be a cool and confident, but equally passionate and caring Danny. He delivered the great vocal and dance skills required to convincingly play his slick character.

With Mackenzie Brown as his innocent counterpart and co-star Sandy, the two maintained convincing chemistry and excellent stage presence.

The Pink Ladies (Taylor Brown as Frenchy, Vanessa Cousins as Marty, Taylor Cammer as Rizzo and Victoria Doughty as Jan) were also able to deliver enough sass and high school drama to bring anyone back to their own high school experiences.

Overall, I was pleased that I went back to see “Grease” for a second time, because when I left the first night, I had no idea what Doughty had said most of the time. Thankfully, the sound issue for her microphone seemed to have been sorted out by the sound designer, Patrick Monaghan Jr. when I went again on the last night.

Unfortunately, I couldn’t hear Athena Furioni as Cha-Cha DiGregorio either night. This was likely not due to any fault of her own, but rather to a lack of microphones. It was a shame that no one figured out a way to creatively sneak her one. It was also a little bit surprising that she was given a plain pastel yellow dress for the high school dance scene. An extravagant dancer with an extravagant name deserves an extravagant dress.

The band, under the music direction of Carol Spralding, also did a great job blending in and providing mood-appropriate sound.

Only at the high school dance scene did I wish for them to be a little bit quieter, which wouldn’t have made sense because they were supposed to be more noticeable at that point due to the nature of a school dance scene.

Unfortunately, this was the time when Furioni had most of her lines, and again it was hard for her to compete.

Overall, “Grease” looked like pure fun for everyone involved, including the handful of dance club members that were able to participate.

With choreography also designed by Cousins, the show was well-rounded and highly entertaining.