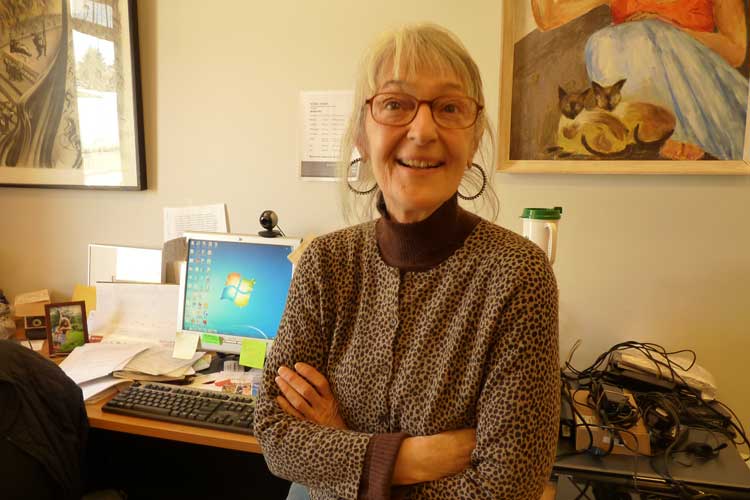 Anyone who knows Assistant Chief Technology Officer Sally Searles knows she would like to quietly retire from Johnson State College after 34 years of service, with as little fanfare as possible.

Given her long years of service to the college, however, that wish may not be possible. Her friends and co-workers understand this about Searles but think it’s also important to give credit where credit is due.

“She started working here, she did a good job, she worked tirelessly, and now it’s time for her to go and so I am glad you are doing the interviews because I think it needs to be highlighted because she is a pretty spectacular person,” said Dean of Administration and Chief Technology Officer Sharron Scott.

Today in her role as Assistant CTO Searles oversees the day-to-day operations of IT, identifying when computers need to be changed out, looking at the network infrastructure, working with individual staff in academic departments and really keeping her eye on technology to make sure that JSC is headed in the right direction.

She has seen many changes in the IT department since she has been employed at Johnson. Searles started working at JSC in 1978 as a faculty secretary. According to Scott she was essentially in the typing pool because everything was done by memos back then. “She would type letters, from faculty to faculty and faculty to administration and letters from faculty to people outside and as computers began to be introduced she really saw how computers could make things better,” Scott said.

At that point Searles moved from a faculty secretary position into working more with computers, specifically academic computers, working with applications such as WordStar, World Cat and Lotus 123.
Over the years there are a number of people who were thankful that Searles dug in and resolved their technological issues and worked until the job got done.

Faculty Librarian Joseph Farara met Searles in 1990 after he accepted the position of President’s Designee for Computing in which he advised the college president on technological developments affecting higher education and how they should be deployed at Johnson.

He was informed that nobody at Johnson cared about technology, but he soon found out that was wrong. There was one person who was very interested in technology at Johnson and that was Searles.

She had put together a computing lab on campus and he was impressed that she had a very great grasp of what was practical and where things were going.

“The reason there is really a robust technological presence at Johnson is in a large part due to Sally’s vision and perseverance,” Farara said.  “She has an incredible work ethic and a complete dedication to the students and the academic mission of the college.

“Sally is the kind of person who would loan people money, give them food, and give them rides, a really great member of the college community,” said Farara. “It was a really great experience working with somebody who was as passionate and as hardworking and as dedicated to the institution as Sally.”

Scott stressed Searles’ characteristic modesty and diligence when pointing out how she responds to thanks: “She would inevitably just say, ‘It’s all just part of the job, this is just what I am supposed to do, you don’t have to thank me.’ It is a hallmark of who she is,” said Scott. “It is a spectacular career and I am glad she is able to retire and be with her husband and spend time with her grandkids. We are lucky to have had her here these last 34 years. It’s pretty remarkable the change that’s she seen and that she has helped introduce to the college. She is going to be missed.”

Public Services Librarian Linda Kramer remembers that Searles had already been at JSC for several years when Kramer joined the staff in September 1984 to assist with the library’s transition to an online environment.

“In those early days of automating the library, I know we must have been a nuisance to the computing staff,” she said. “We were always requiring new outlets in a building that was not designed for what we needed and requesting hardware and software that was often hard to find and rarely worked out of the box. As part of that crew who had to deal with the increasing demands of the library and the college, Sally worked tirelessly to bring about the dramatic changes we began to see at Johnson State.”

After the technical pieces somewhat stabilized, teaching people how to use the resources was the next priority. Working directly with faculty and students, Searles helped them understand technology and then as things got to be more and more advanced, she took on greater responsibilities. “Sally was everywhere at once, filling in for media services before we had someone in that position, or making office visits to staff and faculty, fixing whatever needed fixing,” Kramer said.

For a period of several years, Searless had an office in the Willey LLC next to Kramer and she recalled how they liked to share stories of their love-loathe relationship with the electronic age.  “One day I found and posted a sign on Sally’s door that pretty much sums up what two veterans on the ‘bleeding edge’ of technology have witnessed over the years: Murphy’s Law of Media –”

If anything can go wrong, it will. Equipment knows when you are nervous. No two plugs are compatible. Slides are always upside down. Computer files are always incompatible. If it worked yesterday, it won’t work today–that’s progress.