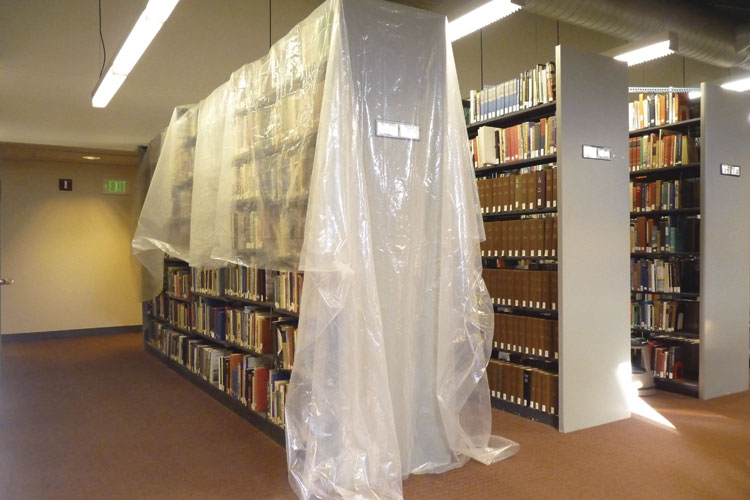 Clear plastic lies draped over bookcases in the Willey Library and Learning Center, and buckets wait ready to be set out. In the SHAPE fitness facility, ceiling tiles cover a leak that could resume with warmer weather.

It often seems that when it rains it pours, at least in the two buildings that have struggled for years to contain the persistent problem of leaky roofs.

Leaking has been observed in the WLLC since it first opened 16 years ago. Faculty Librarian Joseph Farara said that it was on the list for the original contractor for final work to be done, but that the contract ended before it was addressed.

The water consistently leaks onto a section of the third floor stacks.

Water damage is also observable on a column on the second floor. “Any kind of heavy rain for the most part will create some kind of a problem,” said Farara. He noted that it has been observed that leaking tends to occur when the wind is blowing from east to west.

The leaking is not always easy to predict, however, according to custodian Ronald Miller. “Sometimes we’d have a real downpour and you’d expect there’d be some leaks somewhere and you come in the next morning and there’s nothing,” said Miller. “Then other days you don’t expect it, somehow [you] have them.”

The severity of the leakage is also inconsistent. “It’s not really predictable,” said Farara. “There are times when it’s just a small dribble, and there’s other times where it’s getting things very, very wet…it’s like a shower.”

Farara says he has had to replace books that have been ruined by water damage or mold.

Dean of Administration Sharron Scott attributes the leaks to the poor design of the building. When the building was first constructed the leaks were much more serious, and extensive work was done to reduce the damage. Initially there were heavy leaks in the lobby of the WLLC.

“When the building was first built that water actually came down almost like a waterfall along that one wall,” said Scott. “The roof itself does not need replacing. There are some design flaws, all we can do is try and compensate for them. And we are constantly looking for new methods of trying to be able to do that.”

Five years ago, major repairs were carried out on the WLLC in an attempt to provide a long-term solution for much of the leaking.

In SHAPE, the leaks occur infrequently and in seemingly random locations. Their cause is unknown, but SHAPE Facility Coordinator Wendy Velander speculates that the roof of the building needs to be upgraded. “They did a lot of interior work with the renovations, but there’s definitely some exterior work that needs to be done on the roof,” said Velander.

Scott confirmed that there are plans to replace the SHAPE roof. “We have a schedule that we use for replacing roofs,” she said. “SHAPE has been number one on the list for the last few years.” The roof will be replaced within the next few years, with money taken from state funds given to the school that are put aside for extensive replacements and repair.

According to retired Director of Athletics Barbara Lougee, there were leaks when she started working at SHAPE 20 years ago. The leaks have occurred all over the building, showing up in the varsity and multi-gyms, the fitness center, and most recently the front lobby.

“It’s in different spots each year, in the spring or when it rains a lot,” said Velander. The leak in the lobby occurred unusually early this year, a result of the warm weather over the past few weeks. Velander hopes that cold weather will hold until the snow clears off the roof enough for maintenance to go up to make a patch.

Velander sometimes has to move equipment to avoid it being damaged by the water. “Sometimes it starts dripping in the fitness center, close to the treadmills or coming down the wall next to the TVs,” she said. There has been no substantial damage to the equipment as a result of the leakage.