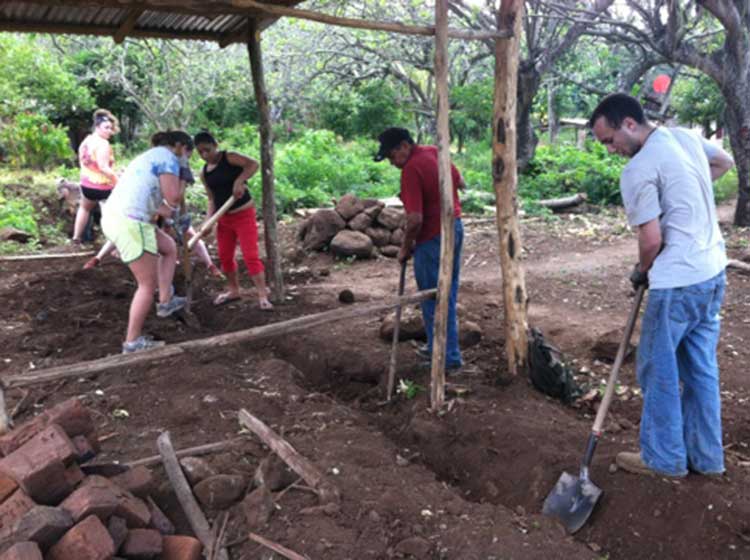 From Feb. 17 through Feb. 25, 11 Johnson students and one staff adviser forewent the usual college tradition of traveling to a sunspot for a spring break bacchanal to take part in JSC’s Clean Water Solutions Trip to Nicaragua.

The expedition was organized by the JSC chapter of Break Away Alternative Spring Breaks, and their goal was to bring fresh drinking water to an economically impoverished village located on the banks of a volcano.

Their destination was the small island of Ometepe, which is approximately 35 km long and 5-10 km wide.

Ometepe, however, is only small when viewed out of context. It claims a number of records. It is the largest volcanic island on a freshwater lake in the world, and the lake where it sits and smolders, Lake Nicaragua, has the distinction of being the largest freshwater lake with a volcanic island within its waters. The island is formed by two volcanoes, Concepcion and Maderas, which are connected by an isthmus.

The team approached the island by boat. Jon Willson, a JSC senior and one of two student leaders on the trip, cited the approach as his most vivid memory from the trip.

He described first seeing the lush volcanic island appearing to sprout up from the water as they drew closer and closer.

He compared it to other, similar experiences he’s had, but noted that approaching Ometepe was unique in that he kept expecting to see hints of civilization reveal themselves as they drew closer, but this didn’t happen.

Lizzy Ponchak, also a JSC senior, related to the overwhelming strangeness of the alien landscape. “Dogs are like squirrels there. They’re everywhere, and they’re really thin,” said Ponchak. “Dogs, horses, cattle, they’re all really thin. It’s not anyone’s fault. It’s just the way it is. They have so little, but they’re so happy. Every day is like family day. That’s actually a quote from a local: ‘In your country, Sunday is family day. Here every day is family day’.” She paused to reflect, then added, “I’ll never be the same.”

Nor will 46 households which now have running water.

The island of Ometepe has a long and embattled history. It became a favorite spot for pirates in the 16th and 17th centuries. Its allure lay in the fact that they could sail right up the San Juan River from the Caribbean Sea to an island fortress, a utopia whose inhabitants were completely unprepared for the pirates’ form of diplomacy, which consisted of rampaging local settlements, stealing their food stocks and enslaving the populace. As a result, the locals moved onto the slopes of the volcanoes, leaving the shoreline to the whimsies of the invaders.

Fast forward a few hundred years. Some of the descendants of these people still inhabit the island, where according to Willson, the economy is based on agriculture, livestock, and, increasingly, tourism. Ometepe is surrounded by one dirt road with trails leading inland and up from it.

The group from Johnson visited the village of Merida, located on the side of the island with the smaller of the two volcanoes, Maderas.

Despite the discovery of a freshwater lagoon in the 1930s in a crater at the top of the volcano, water in the village of Merida is in short supply, as the locals lack the funds to fully develop their water delivery infrastructure.

The fundraising by the team at Johnson is ongoing and they have raised approximately $10,000 so far.

Even so, in trying to alleviate Merida’s water problem the expedition faced a daunting task.

On Sunday, Feb. 19, the team from Johnson climbed Maderas to view the source waters for the plumbing project.

After a hard hike the team arrived at a spring high above the village.

Here, they could see the large pipes which carry the water down the slope relying on gravity.

As the pipes descend, they become smaller and more distributed, branching off into the vast network of piping and trenches on which the locals rely to bring the precious resource to the desired locations.

Having surveyed the water source, the team dropped back to the village to begin their installation work the next day.

It was a holiday weekend and a large makeshift bullring had been erected. Street vendors hawked wares and delicacies.

From the area where they were, according to Ponchak, Maderas’ sister volcano, Concepcion, constantly smoldered off in the distance, creating a mystical ambience.

“It was neat to see that smoking every day,” said Ponchak. Concepcion’s last eruption was in 2010, when most locals ignored the government’s calls to evacuate.

The ominous smoke from the neighboring volcano didn’t frighten Ponchak, however. “I was more afraid of the scorpions and the tarantulas in my cabana,” she said.

The village of Merida is comprised of simple dwellings, houses of brick and mortar which are rarely completed.

The roofs are generally thatched. Merida has the one high school on the island.

“The kids bike two hours each way. If they don’t have a bike,” said Willson, “they don’t go to school.”

Ponchak noted that the work was both long and arduous, made even more so by the hard, volcanic soil through which they had to dig.

“We put in piping and spigots for each family,” said Ponchak. “The pipes were the plastic kind with the glue. We dug trenches. It was really hard soil, volcanic and rocky. Sometimes you had to take picks just to get out the rocks. We worked for like eight hours a day. But, it was totally worth it, just to see how grateful they were.”

The team’s goal was to connect 50 households in the village to this network.

They succeeded in bringing water to 46 homes, citing a lack of funds as the cause of the very minor shortfall.

How did the team react to coming up four households shy of their lofty goal?

According to Willson, they plan on doubling the target for next year.

How did the locals react to 46 of their households getting plumbed with fresh water?

They threw the team from JSC a party.

“At the end all the locals came out and gave us fruit. It was amazing,” said Ponchak. “They were so grateful. It felt so good. Even grown men were crying. To see them come out and do a traditional dance meant so much to me, being a dancer.”

Ponchak isn’t alone in her reaction to the experience. Willson echoed a similar sentiment, describing his feelings upon returning to the United States: “I want to be doing meaningful work. So it’s hard to transition back into college, where the work is less fruitful. But a trip like Nicaragua will present me with meaningful career opportunities in the future. I’ll be doing this kind of thing long after I leave Johnson.”

“I mean, I’m graduating in the spring,” said Ponchak, “but this isn’t going to stop here. We want to make it so we can keep this trip happening.”

The JSC chapter of Break Away Alternative Spring Breaks formed a compact last summer in Managua with four other colleges, committing to sustain humanitarian trips to Nicaragua for the next five years.