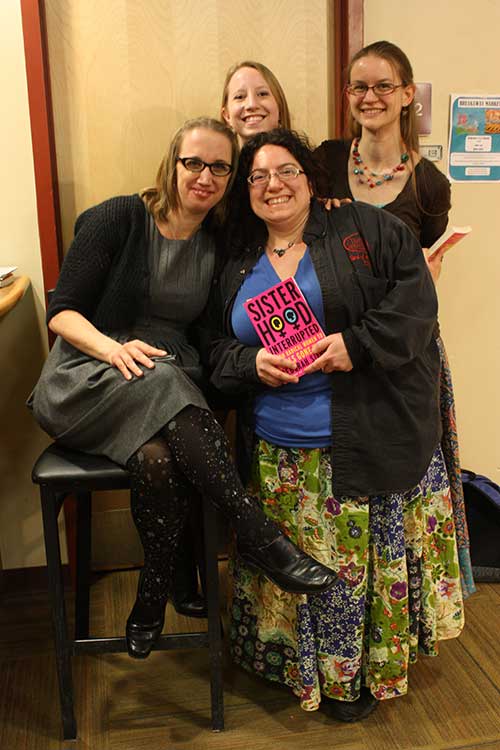 “It was great to meet Deborah, she has a young soul and as soon as you meet her you get this blast of intelligent, curious, hopeful, excited energy,” said Compagna. “Over dinner it was great to relax with her and hear her story of how the twists and turns of her life brought her to writing her book and how that has sparked ideas for the book she is currently researching.”

After the dinner and her introduction, Siegel took the podium and delivered an eloquently powerful speech.

While focusing on the content of her book, Siegel revealed more of her personal motives of why she wrote the book in the first place, and outlined the things she discovered about the feminist movement—both past and present—while writing it.

She touched on what she believed were the three “flash points” of conflict between older and younger feminists, which included sex, motherhood, and work.

She then urged the audience to consider important questions, such as, “Are we really at a point in history when younger women are overly entitled?” “Can women have it all, in terms of having both families and careers?” “Who is feminism for?”

Siegel’s talk was balanced with humor and some grim statistics.

“Her presentation had a way of making you feel that you were in a one-on-one conversation,” said Compagna.

Siegel shared the article, “From Young Feminists to Old Feminists: If You Can’t Find Us, We’re Online!”

Despite this, Siegel was extremely optimistic overall and is convinced that women could and would find a way to finally join forces and bring about real social change, not just for women, but gender equality in general.

Once her speech had concluded, Siegel welcomed questions from the audience. The questions covered a wide variety of subjects, including resources for helping victims of sexual violence, personal opinion on “raunch feminism,” such as “Grrls Gone Wild” or the Slutwalk protests, the use of the word “sisterhood,” pop culture, and political issues.

Siegel stayed in the Performance Space to sign books for audience members which were for sale after the talk.

“Deborah left us with the message that we still have a long way to go, but it is possible,” Compagna said. “She is proof that feminism is still very much alive.”